Celiac Disease (square) Celiac Disease (circle) Celiac Disease (triangle) C-Section Babies May Miss Out On The Benefits Of The Vaginal Microbiome. Julien Blanc and his employers were underground successes in the pickup artist community—until one of their videos set off a firestorm. 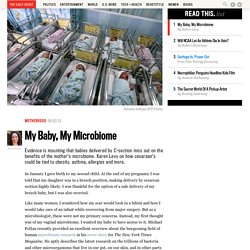 Are these men misogynists or just plain lonely? If 25-year-old Swiss-American pickup artist Julien Blanc is indeed the most hated man in the world, it’s partly because he’s given his detractors such a deep well from which to draw evidence of his depravity. Not too long ago, Blanc and his employer, a Los Angeles-based company called Real Social Dynamics—which claims to be “the world's largest dating coaching company, teaching roughly 1,000 programs a year to men in 70 different countries”—had been fairly unknown outside of the semi-underground subculture of PUA (“pickup artists”), men who obsessively study and practice techniques to convince women to sleep with them.

Then DC activist Jennifer Li stumbled across one of Blanc’s teaching videos and started tweeting out the most offensive ones with the hashtag #TakeDownJulienBlanc. “I don’t get it. Say Hello to the 100 Trillion Bacteria That Make Up Your Microbiome. Crohn's Disease (LiveScience) Crohn’s disease is a chronic inflammatory bowel disease (IBD) that involves inflammation in all or part of the digestive tract. 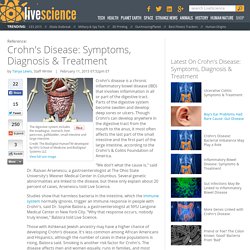 Parts of the digestive system become swollen and develop deep sores or ulcers. Though Crohn’s can develop anywhere in the digestive tract from the mouth to the anus, it most often affects the last part of the small intestine and the first part of the large intestine, according to the Crohn's & Colitis Foundation of America. "We don’t what the cause is," said Dr. Razvan Arsenescu, a gastroenterologist at The Ohio State University's Wexner Medical Center in Columbus. Several genetic abnormalities are linked to the disease, but these only explain about 20 percent of cases, Arsenescu told Live Science.

Studies show that harmless bacteria in the intestine, which the immune system normally ignores, trigger an immune response in people with Crohn's, said Dr. Those with Ashkenazi Jewish ancestry may have a higher chance of developing Crohn’s disease. Symptoms Prevention. 11 Surprising Facts About the Digestive System. 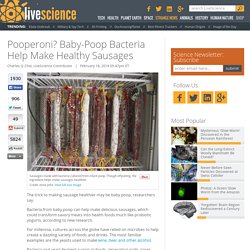 Bacteria from baby poop can help make delicious sausages, which could transform savory meats into health foods much like probiotic yogurts, according to new research. For millennia, cultures across the globe have relied on microbes to help create a dazzling variety of foods and drinks. The most familiar examples are the yeasts used to make wine, beer and other alcohol. Bacteria and yeast ferment sugars in foods, generating acids, gases and alcohols. Bread gets its spongy texture from bubbles of carbon dioxide released by fermenting yeast; cheese, pickles and kimchi traditionally often got their sharp taste via fermentation as well. In addition, many types of sausages — including pepperoni and salami — are made with the aid of bacterial fermentation, which helps give these sausages their characteristic tangy flavor and, in many cases, their chewy texture and intense red color.

Fermenting sausage Baby bacteria. On Clostridium Difficile and Fecal Transplants (11/11/11, StuffYouShouldKnow) Remember the MRSA scare of a couple years ago? 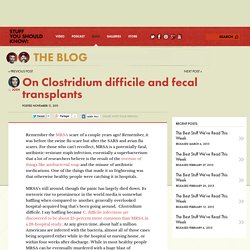 Remember, it was before the swine flu scare but after the SARS and avian flu scares. For those who can’t recollect, MRSA is a potentially fatal, antibiotic-resistant staph infection, essentially a superbacterium that a lot of researchers believe is the result of the overuse of things like antibacterial soap and the misuse of antibiotic medications. One of the things that made it so frightening was that otherwise healthy people were catching it in hospitals. MRSA’s still around, though the panic has largely died down. Its meteoric rise to prominence in the world media is somewhat baffling when compared to another, generally overlooked hospital-acquired bug that’s been going around, Clostridium difficile. To solve this conundrum, in the 1980s an Australian physician Thomas Borody turned to the field of veterinary science and agrarian folk medicine.