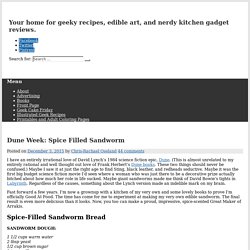 The Secret Douglas Adams RPG That People Have Been Playing for 15 Years. By Lewis Packwood Douglas Adams dreamt up the Starship Titanic in 1982 as a half-page gag in Life, the Universe and Everything, the third book of the Hitch Hiker’s Guide to the Galaxy ‘trilogy in five parts’. 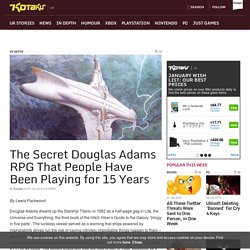 The luckless vessel served as a warning that ships powered by improbability drives run the risk of having infinitely improbable things happen to them – like winking out of existence, for example. Many years later, in the mid-Nineties, Adams revisited the idea when he was casting around for something on which to base a CD-ROM game. The project eventually saw the light of day in 1998, emerging as a graphic adventure with a fancy conversation engine called ‘Spookitalk’ and voice acting by ex-Pythons Terry Jones and John Cleese, as well as Douglas Adams himself.

7 Fan Works So Good They Were Adopted By The Creators. One of the worst insults you can say to a professional creator is "This is like something a fan would make. 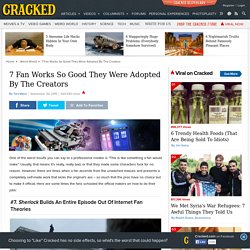 " Usually, that means it's really, really bad, or that they made some characters fuck for no reason. However, there are times when a fan ascends from the unwashed masses and presents a completely self-made work that kicks the original's ass -- so much that the pros have no choice but to make it official. Here are some times the fans schooled the official makers on how to do their jobs: #7. 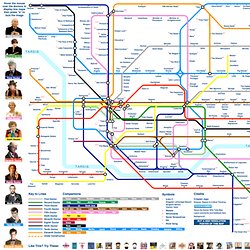 What will The Simpsons look like after the apocalypse? Google Maps Has An Incredible Doctor Who Easter Egg. The control room got a makeover for the 2012 Christmas special. 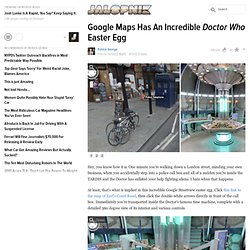 SExpand Hell, I just started watching it, and the TARDIS is the dingiest, most run-down looking ship I've ever seen. Also, you don't "accidentally" walk into it...you need the key. RamsesThePigeon comments on Explain Death like your a 10 year old who has experienced it for the first time. Walter White’s, “I Am the One Who Knocks” Speech as Written by Other Authors. Jane Austen “I’m the person who gentle folk hear after dinner, what strikes fear in their drawing rooms,” our heroine overheard the balding gentleman in the dark hat and spectacles remark to his astonished wife. 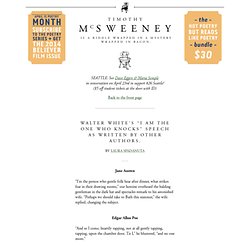 “Perhaps we should take to Bath this summer,” the wife replied, changing the subject. Edgar Allan Poe. Breaking Bad's "The one who knocks" as written by famous authors. Breaking Bad - Walt: "I am the one who knocks" First scientific paper to be released in Elvish, Dwarvish and English. The hobbit — an unexpected deficiency. A striking feature of fantasy literature has been the consistent victory of good characters over bad. 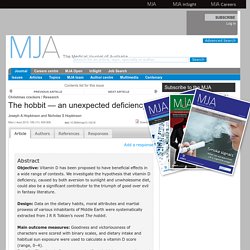 While the consensus has been to attribute this to narrative conventions about morality and the necessary happiness of endings, we hypothesised that a major contribution to the defeat of evildoers in this context is their aversion to sunlight and their poor diet, which may lead to vitamin D deficiency and hence reduced martial prowess. Vitamin D is a fat-soluble, secosteroid hormone, which in humans is largely synthesised in the skin when exposed to ultraviolet light, and is sometimes called “the sunshine vitamin”.1 Vitamin D is also found in some foods, particularly oily fish and, in small amounts, in egg yolks, cheese, beef, liver and some mushrooms.

It has a well described role in calcium metabolism, with deficiency resulting in rickets and osteomalacia. Results. Why Remakes Are One of Our Greatest Achievements as a Civilization. We Are The Strange. Video reviews.