Why doesn't the fastest cyclist win the Tour de France? The Tour de France rolls to a conclusion this Sunday in Paris, and Kenyan-born Brit Chris Froome holds a commanding lead over his rivals. 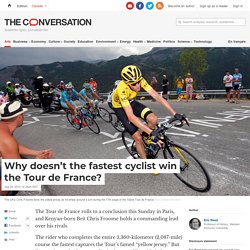 The rider who completes the entire 3,360-kilometer (2,087-mile) course the fastest captures the Tour’s famed “yellow jersey.” But Froome’s not the fastest cyclist in the race. That title belongs to Slovak Peter Sagan, who wears the green jersey of the race’s sprinting champion. Sagan, however, sits more than an hour behind Froome in the overall standings. In fact, out of the 198 cyclists who started the Tour on July 4, only five or six had any real chance of vying for the yellow jersey. Why is this the case? An itinerary that necessitates different strategies The Tour is a three-week race that runs along the open roads of France and Western Europe in June and July. Organizers invite professional teams of nine riders to compete.

The most important strategic reality is that even the speediest cyclist riding alone can’t pedal as fast as a group of cyclists. It takes a special kind of cyclist to win the Tour de France. The Tour de France is the world’s most famous cycling competition, and not just for its sheer length or stunningly picturesque vistas. 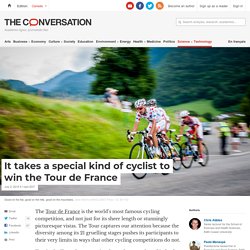 The Tour captures our attention because the diversity among its 21 gruelling stages pushes its participants to their very limits in ways that other cycling competitions do not. To win the Tour, the competitor has to be a rare breed indeed: a cyclist who can excel in multiple areas, not just a specialist in straight line speed or climbing hills. This year’s Tour starts in Utrecht, Netherlands, on Saturday July 4 and rolls to an end three weeks later in Paris, on the Champs-Élysées. In between are 21 stages, including nine flat, three hilly and seven mountainous, with five summit finishes. Each competitor also takes part in two time trials: an individual and a team time trial. Cycling’s Latest Controversial Performance Enhancer: the Supertuck. BAGNÈRES-DE-BIGORRE, France—If Julian Alaphilippe was going to become the first Frenchman in half a decade to wear the Tour de France’s yellow jersey, he knew he had to do something a little bit crazy—at least by cycling standards. 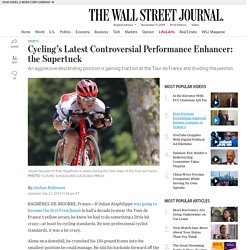 By non-professional cyclist standards, it was a lot crazy. Alone on a downhill, he crunched his 130-pound frame into the smallest position he could manage. He slid his backside forward off the saddle and onto the top tube. He moved his hands from the ends of the handlebars onto the tops, nowhere near his brakes. And he lowered his chin over the stem—he was now attacking the descent goatee-first. It was not how bikes are meant to be ridden. “Super dangerous,” Team Ineos director Nicolas Portal said. Tour de France riders put their bodies through hell. An expert explains.

The Tour de France is probably the most physically demanding major sporting event in the world. 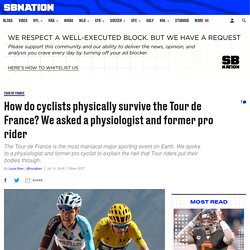 Over 23 days and 21 stages, riders burn an average of roughly 5,000 calories per day, which is almost twice as much as a pro marathon runner might burn in a single race, and all the while they must maintain a sharp mind, marking their opponents and working with teammates to go fast as efficiently possible before their bodies cave in. Cycling a grand tour is as much a fight against one’s own body as it is against opponents. Quite literally, cyclist’s bodies begin fighting back after the first week. Riders begin to lose muscle, their immunes systems tank, and they practically have to force feed themselves in order to maintain the baseline system functionality to climb, let’s say, Alpe d’Huez. Yes, cycling has a doping problem, but it’s hard to blame athletes who are putting their bodies through very real trauma for looking for some kind of shortcut. How safe is it to ride a grand tour, really? Cycling in the US from a Dutch perspective.