Battle Stack: The Battle Of Agincourt tactics (1415) JOAN OF ARC, The Maid of Orléans. The Bloody Throne: 5 Key Battles of the Hundred Years' War. Despite the name, the Hundred Years’ War between England and France actually lasted 116 years (1337-1453). 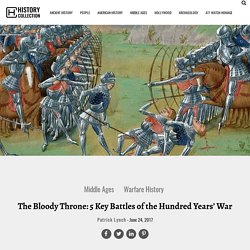 It was an intermittent conflict which involved a number of disputes; most notably the legitimate successor to the French Crown. Overall, five generations of kings from Britain and France fought over the right to rule what was the most powerful kingdom in Western Europe at the time. History - British History in depth: The Hundred Years War. Hundred Years’ War facts: who fought in it, why did it start, how long did it last? The first thing anyone usually learns about the Hundred Years’ War is that it did not last 100 years. 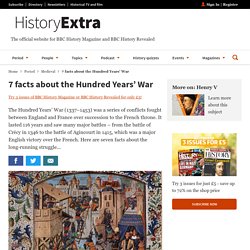 Tradition dates it from 1337 to 1453, but in some ways it is more helpful to view this longest of European wars as one phase of an even longer struggle between England and France, stretching perhaps from the Norman Conquest of 1066 until the 1904 Entente Cordiale [a series of agreements signed between Great Britain and France that marked the end of hundreds of years of intermittent conflict between the two states.] Conflict with the ‘ancient enemy’ has shaped the identities of both countries, and memories of the war remain long on both sides of the Channel.