Skaldic Poetry of the Scandinavian Middle Ages. An international project to edit the corpus of medieval Norse-Icelandic skaldic poetry. 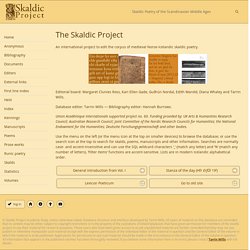 Editorial board: Margaret Clunies Ross, Kari Ellen Gade, Guðrún Nordal, Edith Marold, Diana Whaley and Tarrin Wills. Database editor: Tarrin Wills — Bibliography editor: Hannah Burrows. Union Académique Internationale supported project no. 60. Funding provided by: UK Arts & Humanities Research Council; Australian Research Council; Joint Committee of the Nordic Research Councils for Humanities; the National Endowment for the Humanities; Deutsche Forschungsgemeinschaft and other bodies. English Translations of Sagas. The Flatey Book. Gesta Danorum. Online Medieval and Classical Library Release #28b Originally written in Latin in the early years of the 13th Century A.D. by the Danish historian Saxo, of whom little is known except his name. The text of this edition is based on that published as "The Nine Books of the Danish History of Saxo Grammaticus", translated by Oliver Elton (Norroena Society, New York, 1905).

This edition is in the PUBLIC DOMAIN in the United States. This electronic edition was edited, proofed, and prepared by Douglas B. Killings (DeTroyes@EnterAct.COM), April 1997. | Preparer's Note | The preparer would like to thank Mr. Although Saxo wrote 16 books of his "Danish History", only the first nine were ever translated by Mr. Olrik, J and Raeder (Ed.): "Saxo Grammaticus: Gesta Danorum" (Copenhagen, 1931). Hakonarmal. Sacred-Texts Legends & Sagas Iceland Index Previous Next p. 66 IF THE Lay of Eric was “made to order” by an unknown poet, as the eulogium of an unpopular, though brave, king, the Lay of Hákon is composed by the best-known of Norwegian skalds, unquestionably of his own accord, to commemorate his generally beloved leader. 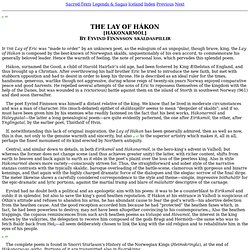 Hence the warmth of feeling, the note of personal loss, which pervades this splendid poem. Hákon, surnamed the Good, a child of Harold Hairfair’s old age, had been fostered by King Æthelstan of England, and thus brought up a Christian. After overthrowing his half brother Eric he tried to introduce the new faith, but met with stubborn opposition and had to desist in order to keep his throne. The poet Eyvind Finnsson was himself a distant relative of the king. Eyvind had no doubt both a political and an apologetic aim with his poem: it was to be a counterblast to Eiriksmól and outdo it in splendor, but also to save the king’s good heathen reputation. 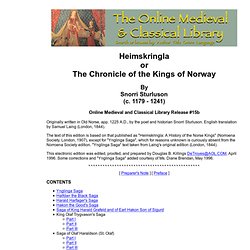 English translation by Samuel Laing (London, 1844). The text of this edition is based on that published as "Heimskringla: A History of the Norse Kings" (Norroena Society, London, 1907), except for "Ynglinga Saga", which for reasons unknown is curiously absent from the Norroena Society edition. "Ynglinga Saga" text taken from Laing's original edition (London, 1844). Hrafnagldur Odins. Icelandic Saga Database. The Saga of Half and His Heroes. The Saga of Half & his Heroes © Peter Tunstall, 2005 1. 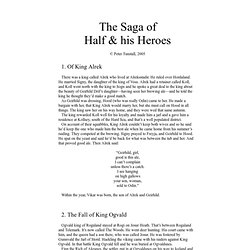 Of King Alrek There was a king called Alrek who lived at Alreksstadir. As Geirhild was dressing, Hood (who was really Odin) came to her. The king rewarded Koll well for his loyalty and made him a jarl and a gave him a residence at Kollsey, south of the , and that’s a well populated district. On account of their squabbles, King Alrek couldn’t keep both wives and so he said he’d keep the one who made him the best ale when he came home from his summer’s raiding. “Geirhild, girl, good is this ale, I can’t complain unless there’s a catch. I see hanging on high gallows. The Saga of Yngvar the Traveller. The Saga of Yngvar the Traveller © Peter Tunstall, 2005 1. 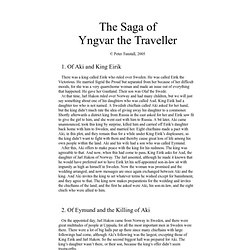 Of Aki and King Eirik There was a king called Eirik who ruled over . At that time, Jarl Hakon ruled over and had many children, but we will just say something about one of his daughters who was called Aud. Sogubrot. Fragment of a Saga about Certain Early Kings in and © Peter Tunstall, 2008 1. 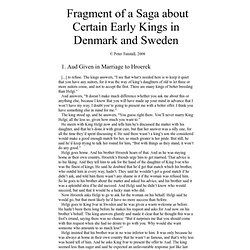 Aud Given in Marriage to Hroerek [...] to refuse. The kings answers, “I see that what’s needed here is to keep it quiet that you have any suitors, for it was the way of king’s daughters of old to let three or more suitors come, and not to accept the first. Aud answers, “It doesn’t make much difference whether you ask me about this or anything else, because I know that you will have made up your mind in advance that I won’t have my way. The king stood up, and he answers, “You guess right there. He meets with King Helgi now and tells him he’s discussed the matter with his daughter, and that he’s done it with great care, but that her answer was a silly one, for all the time they’d spent discussing it. Helgi goes home. Now Hroerek asks Helgi to go to ask for the woman on his behalf.

Helgi goes to King Ivar in and he was given a warm welcome as before. Helgi insisted that his brother was in no wise inferior to him.