James Bond Wiki - Wikia. All 102 James Bond Villains, Ranked. They say a James Bond movie is only as good as its villain. 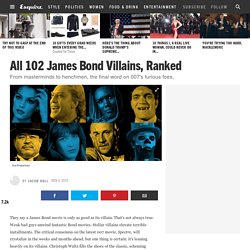 That's not always true. Weak bad guys unwind fantastic Bond movies. Stellar villains elevate terrible installments. The critical consensus on the latest 007 movie, Spectre, will crystalize in the weeks and months ahead, but one thing is certain: it's leaning heavily on its villains. Christoph Waltz fills the shoes of the classic, scheming mastermind. There were a few ground rules that went into the making of this list. Bond girl - James Bond Wiki - Wikia. A Bond Girl is a character or the actress portraying a love interest or sex object of James Bond in a film, novel or video game. 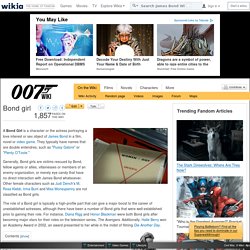 They typically have names that are double entendres, such as "Pussy Galore" or "Plenty O'Toole. " The role of a Bond girl is typically a high-profile part that can give a major boost to the career of unestablished actresses, although there have been a number of Bond girls that were well-established prior to gaining their role. For instance, Diana Rigg and Honor Blackman were both Bond girls after becoming major stars for their roles on the television series, The Avengers. Additionally, Halle Berry won an Academy Award in 2002, an award presented to her while in the midst of filming Die Another Day. History Films Official James Bond girls Group Galleries You Only Live Twice (1967) On Her Majesty's Secret Service (1969) For Your Eyes Only (1981) The Living Daylights (1987) Novels Ian Fleming Kingsley Amis. James Bonding. James Bonding : Octopussy podcast James Bonding : NEVER SAY NEVER AGAIN with Aaron Abrams. 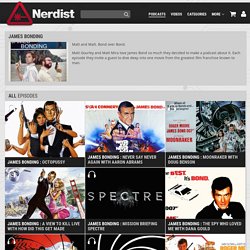 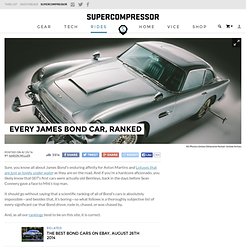 And if you’re a hardcore aficionado, you likely know that 007’s first cars were actually old Bentleys, back in the days before Sean Connery gave a face to MI6’s top man. It should go without saying that a scientific ranking of all of Bond’s cars is absolutely impossible—and besides that, it’s boring—so what follows is a thoroughly subjective list of every significant car that Bond drove, rode in, chased, or was chased by. And, as all our rankings tend to be on this site, it is correct. 39. Renault 11 Taxi Movie:A View to a Kill It’s a run-of-the-mill Parisian taxi that Bond commandeered at the foot of the Eiffel Tower to track down parachuting baddies. 38. Movie:For Your Eyes Only Depending on how it’s optioned out, the 2CV has between nine and 29 hp. 37.

Movie: Die Another Day This gorgeous Fairlane is what passes for a fast car in Cuba. 36. JAMES BOND THEME - 1962-2012 (epic music video) James Bond Gunbarrel Sequences 1962-2012 - Blu-Ray - Multiverse Kills James Bond. Until 2008, the James Bond franchise was a lot like Groundhog Day: An infinite loop, every lap of which was superficially different but fundamentally the same. 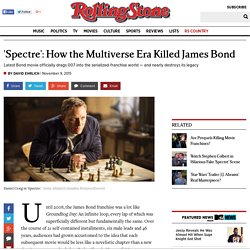 Over the course of 21 self-contained installments, six male leads and 46 years, audiences had grown accustomed to the idea that each subsequent movie would be less like a novelistic chapter than a new drawing on a recently shaken Etch a Sketch. Not until Memento would there be another leading man with such a terrible memory; when Bond's wife was assassinated in the closing moments of On Her Majesty's Secret Service, the iconic spy was literally a different person by the time the next film began. Bond was able to survive any number of tectonic shifts in the cultural landscape in large part because of the series' timeless formula: hit up exotic locations, kill some henchman, have sex with numerous women, immediately forget about them when they're murdered a few scenes later, and defeat an evil mastermind.

Archer reviews every James Bond film. Archer Quotes on James Bond Stills is a Match Made in BAMF Heaven. Login Search Memebase Channels Cheezburger Channels Upvoted Troll Comedian Gets a Scam Call and Decides to Play Along Remember Me? 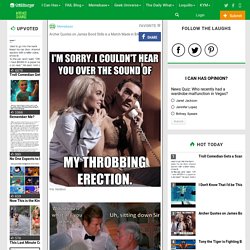 No One Expects to Find Patience at an Apple Store, Which Makes This Mother's Story That Much Sweeter Now This is the Kind of Disney Fan Art I'm Here to See This Last Minute Competitor in a Half-Marathon Took Seventh Place and All of Our Hearts You're Why We Can't Have Nice Things Mesmerizingly Graceful I Don't Know Who I am Anymore If a Snake Could Ever Be Considered Cute, This Freshly-Hatched Yawning Cutie is it Cher Slayed Trump Over Pulling Out of GOP Debates on Fox Memebase Favorite.