The Best of Tsunami-Resistant Building. Architects and engineers can design buildings that will stand tall during even the most violent earthquakes. 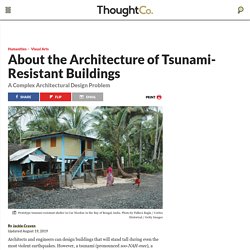 However, a tsunami (pronounced soo-NAH-mee), a series of undulations in a body of water that is often caused by an earthquake, has the power to wash away entire villages. While no building is tsunami-proof, some buildings can be designed to resist forceful waves. KRAH - Tsunami shelter made out of Krah pipes. 11 Mar 2020 Written by Jenny Krämer. 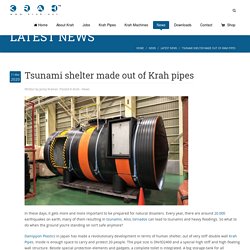 Posted in Krah - News In these days, it gets more and more important to be prepared for natural disasters. Every year, there are around 20.000 earthquakes on earth, many of them resulting in tsunamis. Also, tornados can lead to tsunamis and heavy floodings. Dainippon Plastics in Japan has made a revolutionary development in terms of human shelter, out of very stiff double wall Krah Pipes. Many tests were done and also a real Tsunami Krah pipe shelter was placed (including people) on sea, to see the stability of floating while people are moving inside. Author: Jenny and Lisa KRAH Group. Visiting Alhambra in Granada, Spain. Hiroshi nakamura's ribbon chapel spirals above japanese resort. Located in the grounds of a luxury resort in japan, this wedding chapel designed by hiroshi nakamura has been configured as a double spiral, formed of two separate stairways. in order to ensure sea views, the structure has been elevated above the trees, with an observation platform at a height of 15.4 meters offering sweeping coastal vistas. image © koji fujii / nacasa and partners (also main image) all images courtesy of hiroshi nakamura & NAP. 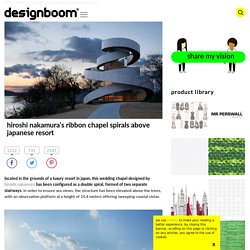 Bockenheimer Warte Subway Station Entrance. Imagine a scene in a Marvel film in which the Hulk has picked up a tram car and rammed it front-first into the sidewalk. 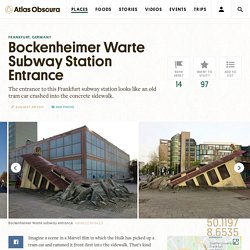 That’s kind of what the entrance to the Bockenheimer Warte subway station looks like. The Bockenheimer Warte subway station is an important interchange station to the west of Frankfurt’s city center. It’s easy to spot from above ground because the entrance looks like a tram car half buried in the concrete sidewalk. The World's Greatest Lighthouses - General - Atlas Obscura Community - Travel Forum. 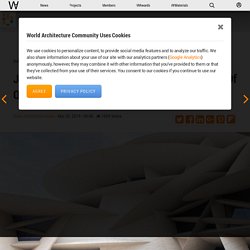 Taking inspiration from the desert rose growing out of the ground, the architect designed a museum comprised of a series of interlocking discs - having various dimensions and sizes - to create different internal spaces and perspectives. Jean Nouvel's firm Ateliers Jean Nouvel started construction on the project in 2010, now after more than a decade, the 52,000-square-metre building has been completed and opened to the public. The museum was originally scheduled to open in 2015 but due to a minor fire exploded near the site of the new museum, some detailed facilities on the construction site and the installation of art pieces delayed the opening of the museum till now.

"Qatar has a deep rapport with the desert, with its flora and fauna, its nomadic people, its long traditions. All images © Iwan Baan > via NMoQ. Yabba Dabba Don't: 'Flintstone House' owner in trouble for dinosaurs, other landscaping improvements - SFGate. By Michelle Robertson, SFGATE Updated 4:35 pm PDT, Friday, March 15, 2019 Constructed by architect William Nicholson in 1976, the Flinstone house built to experiment with new building materials and techniques. 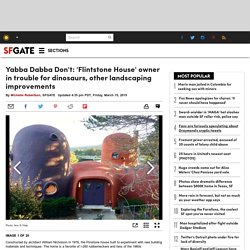 The home is a favorite of I-280 rubberneckers and fans of the 1960s animated television series "The Flinstones. " The home was purchased in 2017 by a private buyer, so it's best viewed while cruising down I-280. lessConstructed by architect William Nicholson in 1976, the Flinstone house built to experiment with new building materials and techniques. Show Us Your Favorite Place With a Face - General - Atlas Obscura Community - Travel Forum. THE KHOOLL. Women Built London’s Waterloo Bridge, But It Took These Photos to Prove It. For more than half a century, it was just a rumor. 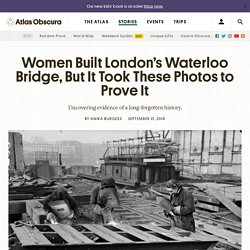 As London’s river boat pilots passed by Waterloo Bridge (“The Ladies’ Bridge,” as some of them called it) they’d tell a story about the women who had built the bridge during World War II. But the idea that women had been largely involved in building Waterloo Bridge wasn’t included in any official history of the structure, or detailed in any records. During the new bridge’s opening ceremony, on December 10, 1945, then-Deputy Prime Minister Herbert Morrison had declared that “the men that built Waterloo Bridge are fortunate men.” 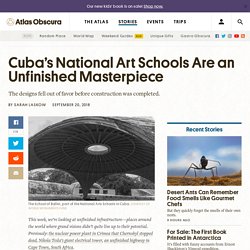 It was 1961, and he had only recently come back to Cuba after a few years in Venezuela, where he had fled after his anti-Batista politics had become a problem back home. He knew he would need help to finish the schools, and he recruited two Italian architect friends to help him complete the task. Together, they would design Cuba’s National Art Schools. Creating Disneyland Was Like Building a Brand New City. 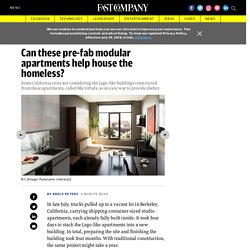 It took four days to stack the Lego-like apartments into a new building. In total, preparing the site and finishing the building took four months. With traditional construction, the same project might take a year. The new 22-unit building will be leased to the University of California and used for grad student housing rented at market rates. This Toronto skyscraper is covered with 450 trees. Siamak Hariri: How do you build a sacred space? Fiat Tagliero Service Station. Project — The Buzludzha Monument. The foundation was created by Dora Ivanova: a Bulgarian architect who first presented her Buzludzha plans as part of her diploma, while studying architecture at the Technical University of Berlin. Gallery: The beauty of architecture that heals. Michael Murphy (TED Talk: Architecture that’s built to heal) was an architecture student at Harvard Graduate School of Design when he took a break from an all-nighter to hear a lecture by Dr. Paul Farmer, a leading health advocate for the global poor. Farmer’s plea for smarter hospitals in the developing world stopped Murphy cold. Why, he wondered, does “great architecture serve so few?” Why do accolades go to those who design high-end sculptural buildings? The house that Tateh built ... out of sand-filled plastic bottles.

A group of women drink tea under the shade of a tent and cast an eye over the construction of an odd, circular house. The half-built dwelling is the brainchild of Tateh Lehbib Braica, 27, an engineer who wanders among the workers. On the ground lie hundreds of sand-filled, 1.5 litre plastic bottles that serve as bricks. The rarely spinning turbines of the Strata Tower, south London. Voted ‘Britain’s ugliest new building‘ by readers of Building Design magazine (and thus the holder of the 2010 Carbuncle Cup), the 43-storey Strata tower in south London presents a distinctive outline with its three turbines fitted to the roofline.

But do they ever move? Designed by BFLS (formerly Hamiltons), the £113 million tower houses 408 apartments, of which just 98 are classified as “affordable housing.” The First Annual International Bamboo Architectural Biennale Explores Material’s Use in Contemporary Design. Builds slanted black holiday ho - elloarchitecture. Inside the world’s best kindergarten. At Fuji Kindergarten outside Tokyo, kids make the most of a magical environment designed just for them. The roof of their oval-shaped school, designed by Tokyo-based firm Tezuka Architects, is an endless playground, and trees grow right through classrooms. So how do you build to let children be children? Says Takaharu Tezuka (TED Talk: The best kindergarten you’ve ever seen): Think like a kid.

He was inspired by his own daughter and son, now twelve and nine, who he says “have become a part of his body.” As they grew up, their habits and desires became his, and in designing his school with his wife, Yui, he only needed to channel them to know what to build. The playground lets kids run forever. Chapelle du Rosaire de Vence. Works — Ant Studio. A Japanese Home Designed Around a Climbable Earthquake-Proof Bookshelf. Welcome to Vertical Garden Patrick Blanc. Frank Lloyd Wright’s Japanese education. To mark Frank Lloyd Wright’s 150th birthday on June 8, many will pay tribute to the architect’s unique gifts and contributions to the field.

But Wright also had a rare nonarchitectural passion that set him apart from his mentor, Louis Sullivan, and his peers: Japanese art. Wright first became interested in his early 20’s, and within a decade, he was an internationally known collector of Japanese woodblock prints. It was an unusual turn of events for a young college dropout from rural Wisconsin.