The Funny Math of Clothing Sizes. NEW YORK, United States — When it comes to women’s clothing sizes, there’s some funny math going on. 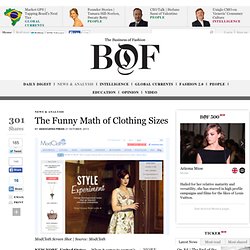 The average American woman is about 25 pounds heavier than she was in 1960. Fashion Should Take Plus-Sizes Seriously. NEW YORK, United States — I read with great interest the Associated Press piece entitled “The Funny Math of Clothing Sizes” that appeared on this website a few weeks ago. 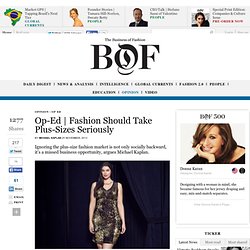 The article describes the disparity between the growing number of plus-size female consumers in the United States and their disproportionately small share of overall women’s apparel sales. “The average American woman is about 25 pounds heavier than she was in 1960. Yet women’s plus-size clothing, generally defined as size 14 and up, still makes up only about 9 percent of the $190 billion spent annually on clothes,” says the article. The author goes on to identify the drivers of this disparity as twofold: firstly, a lack of focus on the category by fashion designers (“the fashion industry has long spent more time, money and marketing on clothing for taut bodies”) and, secondly, pervasive stereotypes associated with the notion that larger women do not want to dress fashionably.

Changing Body Shapes See the Women’s Plus-Size Fashion Market Boom. Retailers Wake Up To Plus-Sized Market With Trendier, Tonier Fare. Cabiria - New York Fashion Week Plus Size Show. In an arena where thin is the norm, many heads were turning when a bevy of plus women descended upon Lincoln Center. 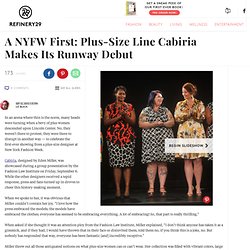 No, they weren't there to protest; they were there to disrupt in another way — to celebrate the first-ever showing from a plus-size designer at New York Fashion Week. Cabiria, designed by Eden Miller, was showcased during a group presentation by the Fashion Law Institute on Friday, September 6. While the other designers received a tepid response, press and fans turned up in droves to cheer this history-making moment.

When we spoke to her, it was obvious that Miller couldn’t contain her joy. “I love how the press embraced the models; the models have embraced the clothes; everyone has seemed to be embracing everything. H&M Quiet Integration of Plus-Size Model Gets Loud - PLUS Model Mag. Looking Different is Not Wrong: Plus-Size Models. Tara Lynn We all know about the beauty standards reinforced in the minds of all the members of the fashion world. 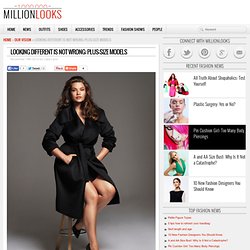 And not only there. Almost everything, surrounding us, in some way tries to emphasize this crucial meaning of being beautiful. Reinventing Plus-Size Style. I attended a runway show at New York Fashion Week this year, and I managed to get a very good seat—in the front row, right where the models made their turns. 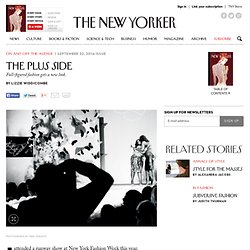 As is often the case in fashion, the best part was not where I was sitting but with whom: two of the biggest players in the industry—the editor-in-chief of the leading magazine and a colleague, a former model. Show time: the lights went up, and a model sashayed onto the runway in something that resembled Miami club wear, by way of an ashram. She wore black platform heels and short white harem pants with a white tailored draped top. A crackle of flashes came from the photographers. The clothes seemed to be a success. Then a model came down the runway wearing a skintight leopard-print dress with a V neck and a scandalously high slit up the front. Plus-size clothing sales have grown 5% in the last YEAR. Despite this growth, a new ModCloth survey found that 46per cent of plus-size women say they 'never or rarely' find flattering clothes By Margot Peppers Published: 21:45 GMT, 2 July 2014 | Updated: 22:22 GMT, 2 July 2014. 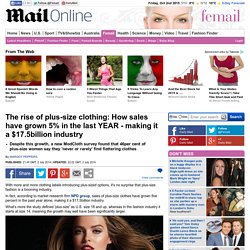 Actual Plus-Sized Models - Problem with Plus-Size Models. You Are What You Wear: How Plus-Size Fashion Figures in Fat Ident...: ingentaconnect. Physically active adult women's experiences with plus-size athletic apparel. Elle Quebec's Plus-Size Cover Model Is Justine LeGault (PHOTO, VIDEO) Three cheers for Elle Quebec, who decided to give their readers a gift this month with an awesome new cover model. 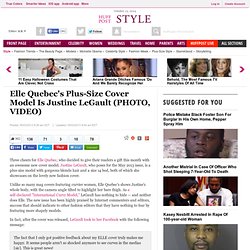 Justine LeGault, who poses for the May 2013 issue, is a plus-size model with gorgeous blonde hair and a size 14 bod, both of which she showcases on the lovely new fashion cover. Unlike so many mag covers featuring curvier women, Elle Quebec's shows Justine's whole body, with the camera angle tilted to highlight her bare thigh. As a self-declared "International Curvy Model," LeGault has nothing to hide -- and neither does Elle. The new issue has been highly praised by Internet commenters and editors, success that should indicate to other fashion editors that they have nothing to fear by featuring more shapely models. In fact, after the cover was released, LeGault took to her Facebook with the following message: The fact that I only got positive feedback about my ELLE cover truly makes me happy.

It is. The Moments That MADE London Fashion Week... Phew! 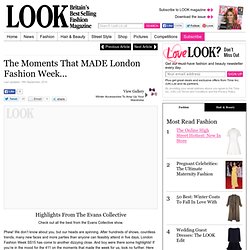 We don’t know about you, but our heads are spinning. After hundreds of shows, countless trends, many new faces and more parties than anyone can feasibly attend in five days, London Fashion Week SS15 has come to another dizzying close. And boy were there some highlights! If you’re in the mood for the 411 on the moments that made the week for us, look no further. Here are the hottest things to come out of London this season. First up, it wouldn’t be the capital without a serious injection of statement style. Secondly, in among all the high-fash catwalk shows was a slew of high-street catwalks to get excited about (including Whistles and Topshop). Having said all that, we wouldn’t have got to any of the shows without our trusty Look Hyundai i10 City cars. Step in Time - Style Bubble. We clapped. 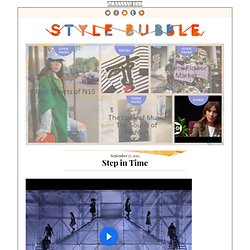 We cheered. We whooped. One Problem With Plus-Size Fashion: Customers Aren’t Buying It. The Plus Size Revolution Is Upon Us — And It Can't Be Ignored.

Plus Size On The Catwalk 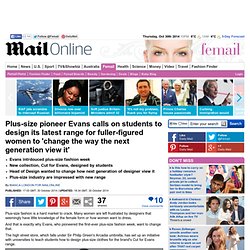 Change in body shapes. 101612184639_Scaraboto_Article.pdf. Viewcontent. This Anti-Victoria's Secret Runway Show Celebrates Real 'Perfect Bodies' of All Sizes—See the Pics! Secrets in Lace, Courtesy Lingerie Fashion Week Victoria' Secret has come under fire for advertisements featuring models with "the perfect body. " The word "body" is meant to refer to their "Body" line of bras, but it's clear the public has interpreted it a wee bit differently, and their campaign quickly sparked outrage online.

But now, it's also inspired a new campaign—and the Anti-Victoria's Secret runway show has been appropriately dubbed the "real 'perfect bodies'. " An army of gorgeous women of all sizes took the stage at the spring/summer 2015 season of Lingerie Fashion Week last weekend in New York to celebrate figures of all shapes and sizes—from 0 to 16 to pregnant, to a group of courageous breast cancer survivors and women currently living with breast cancer. Victoria's Secret had no comment regarding the backlash to their "Perfect Body" campaign. Myla Dalbesio on making history by landing Calvin Klein campaign. Myla Dalbesio is 5ft 11in model and a US size 10, which is a UK size 14Said she's 'definitely bigger than any girl Calvin Klein has ever worked with'The 27-year-old from Wisconsin describes her body type as 'in the middle'Twitter users have expressed outrage she could be considered a 'bigger' girl By Margot Peppers for MailOnline Published: 18:47 GMT, 10 November 2014 | Updated: 11:59 GMT, 11 November 2014.

EDITD look at the opportunities in the plus size market. When H&M‘s swimwear shoot went live on the retailer’s site last week, it sent ripples of admiration round the internet. It wasn’t that they’d featured ‘plus size’ model Jennie Runk, moreover that they did so without fanfare; no company comment, no online reference, just a ‘here’s our latest’ nonchalance. Study provides new evidence that more plus size models could change women’s obsession with thin bodies. (8 November 2012) Dr Lynda Boothroyd British women’s obsession for thin bodies could potentially be changed if advertising showed more plus size models, suggests a new preliminary study. The Durham University researchers, who studied over 100 women, provide evidence to back calls for models in adverts to be more representative of the actual population.

6 Surprising Questions With Our Favorite Plus-Size Bloggers. Mango - Where Does Straight Size Finish and Plus Size Start?  Another high street brand has jumped on the plus size bandwagon this week. Mango, the chic, Spanish powerhouse that fronts its campaigns with the likes of Kate Moss have launched their highly anticipated plus size line Violeta (or Vienneta as I rather inappropriately keep referring to it).

With over 400 pieces in the collection I can seriously only doth my hat to them. Not only are they the only Spanish high street giant willing to accept that not everyone can shimmy a thigh into their straight size line but to go at the venture with such gusto is surely impressive? Granted this is primarily an online offer and I'm yet to see what the sizing is like but surely we should all be applauding the thought right? Oh how very wrong - mere moments after I clicked on my laptop to checkout said collection, I found a barrage of articles that called the retailer out on starting the line from a size 12.