Opentag.com - XML FAQ: Language Identification. You will find here the answers to some of the frequently asked questions about character representation in XML and related technologies. 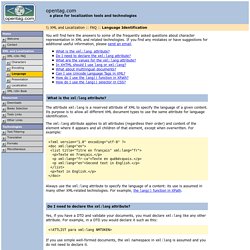 If you find any mistakes or have suggestions for additional useful information, please send an email. What is the xml:lang attribute? The attribute xml:lang is a reserved attribute of XML to specify the language of a given content. Its purpose is to allow all different XML document types to use the same attribute for language identification. The xml:lang attribute applies to all attributes (regardless their order) and content of the element where it appears and all children of that element, except when overwritten. <? Introduction to XPath 2.0: Table of Contents. Introduction to XPath 2.0 Wendell Piez and Deborah A. 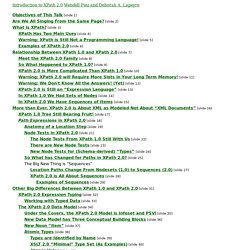 Lapeyre Objectives of This Talk [slide 1] Are We All Singing From the Same Page? [slide 2] What is XPath? [slide 3] XPath Has Two Main Uses [slide 4] Warning: XPath is Still Not a Programming Language! Relationship Between XPath 1.0 and XPath 2.0 [slide 7] Best Online XML Viewer, Formatter, Editor, Analyser, Beautify-Beautifier, Minify, Tree structure, Notepad, Marker. Context for XPath Expressions. The evaluation of an XPath expression depends on the context against which the expression operates. 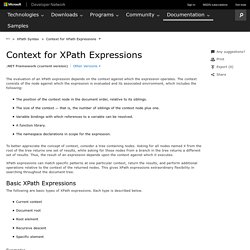 The context consists of the node against which the expression is evaluated and its associated environment, which includes the following: The position of the context node in the document order, relative to its siblings. 13 XPath axes. XPath Axis Diagrams. XML Shell: xmlsh. Exchanger XML Editor - XML Editor and XSLT Debugger available to try for free. Language tags in HTML and XML. Intended audience: XHTML/HTML coders (using editors or scripting), script developers (PHP, JSP, etc.), schema developers (DTDs, XML Schema, RelaxNG, etc.), XSLT developers, Web project managers, standards implementers, and anyone who needs an overview of how language tags are constructed using BCP47. 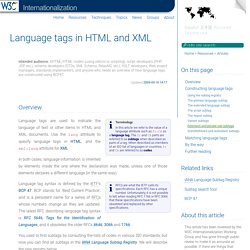 Updated Overview Terminology In this article we refer to the value of a language attribute such as fr-CA as a language tag. The fr and CA parts are referred to as subtags when described as parts of a tag. Language tags are used to indicate the language of text or other items in HTML and XML documents. In both cases, language information is inherited by elements inside the one where the declaration was made, unless one of those elements declares a different language (in the same way).

RFCs are what the IETF calls its specifications. Language tag syntax is defined by the IETF's BCP 47. Note! Language subtag lookup app. BCP 47 language tags are built from subtags in the IANA Subtag Registry. 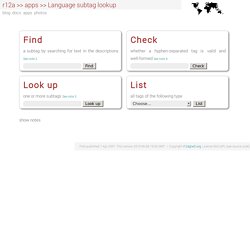 This tool helps you find or look up subtags and check for errors in language tags. Read Choosing a Language Tag for step-by-step guidelines on creating language tags. This tool also provides information to guide your choices. XML Schema Regular Expressions. The W3C XML Schema standard defines its own regular expression flavor. 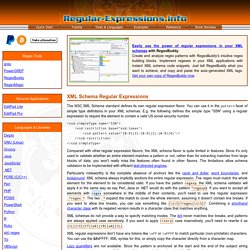 You can use it in the pattern facet of simple type definitions in your XML schemas. E.g. the following defines the simple type "SSN" using a regular expression to require the element to contain a valid US social security number. Compared with other regular expression flavors, the XML schema flavor is quite limited in features. Since it's only used to validate whether an entire element matches a pattern or not, rather than for extracting matches from large blocks of data, you won't really miss the features often found in other flavors.

The limitations allow schema validators to be implemented with efficient text-directed engines. Particularly noteworthy is the complete absence of anchors like the caret and dollar, word boundaries, and lookaround. XML schemas do not provide a way to specify matching modes. XML regular expressions don't have any tokens like \xFF or \uFFFF to match particular (non-printable) characters. RDDL Me This: What Does a Namespace URL Locate? - O'Reilly Media. By Elliotte Rusty Harold 02/20/2001 The W3C has an answer to this question: There is nothing at all at the end of a namespace URI, except perhaps a 404 Not Found error. 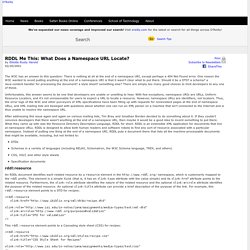 One reason the W3C wanted to avoid putting anything at the end of a namespace URI is that it wasn't clear what to put there. Should it be a DTD? A schema? A Java-content handler for processing the document? Unfortunately, this answer seems to be one that developers are unable or unwilling to hear. After addressing this issue again and again on various mailing lists, Tim Bray and Jonathan Borden decided to do something about it. DTDsSchemas in a variety of languages (including RELAX, Schematron, the W3C Schema language, TREX, and others)CSS, XSLT, and other style sheetsSpecification documents rddl:resource. Date and Time Formats. NOTE-datetime Submitted to W3C 15 September 1997 This version: Newest version: Authors: Misha Wolf <misha.wolf@reuters.com> Charles Wicksteed <charles.wicksteed@reuters.com> Document Status Status of this document. 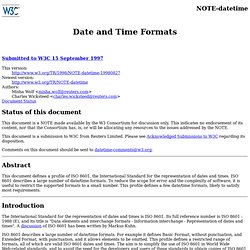