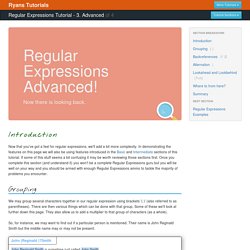 Now there is looking back. Introduction Now that you've got a feel for regular expressions, we'll add a bit more complexity. In demonstrating the features on this page we will also be using features introduced in the Basic and Intermediate sections of this tutorial. If some of this stuff seems a bit confusing it may be worth reviewing those sections first. Grouping We may group several characters together in our regular expression using brackets '( )' (also referred to as parentheses). So, for instance, we may want to find out if a particular person is mentioned.

John (Reginald )? John Reginald Smith is sometime just called John Smith. Notice where the spaces are and aren't in the regular expression above. The above tip is very important and a common source of problems when people first start playing with regular expressions. John (Reginald)? We aren't limited to just normal characters in the brackets. \b(\d{1,3}\.){3}\d{1,3}\b Back references Alternation dog|cat. Lookahead and Lookbehind Tutorial—Tips &Tricks. Lookarounds often cause confusion to the regex apprentice. 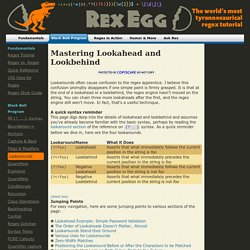 I believe this confusion promptly disappears if one simple point is firmly grasped. It is that at the end of a lookahead or a lookbehind, the regex engine hasn't moved on the string. You can chain three more lookaheads after the first, and the regex engine still won't move. Lookaround - Regex lookahead, lookbehind and atomic groups. Positive and Negative Lookbehind (with Examples) - Regex Tutorial.

In this article you will learn about Lookbehind assertions in Regular Expressions their syntax and their positive and negative application. 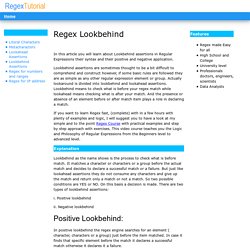 Lookbehind assertions are sometimes thought to be a bit difficult to comprehend and construct however, if some basic rules are followed they are as simple as any other regular expression element or group. Actually lookaround is divided into lookbehind and lookahead assertions. Lookbehind means to check what is before your regex match while lookahead means checking what is after your match. And the presence or absence of an element before or after match item plays a role in declaring a match. If you want to learn Regex fast, (complete) with in a few hours with plenty of examples and logic, I will suggest you to have a look at my simple and to the point Regex Course with practical examples and step by step approach with exercises.

Explanation Lookbehind as the name shows is the process to check what is before match. I. Ii. Lookahead and Lookbehind regex. Sometimes we need to look if a string matches or contains a certain pattern and that's what regular expressions (regex) are for. 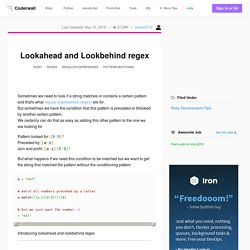 But sometimes we have the condition that this pattern is preceded or followed by another certain pattern. We certainly can do that as easy as adding this other pattern to the one we are looking for. Advanced Regex Tutorial—Regex Syntax. What the (? 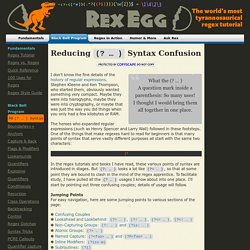 … )A question mark inside a parenthesis: So many uses! I thought I would bring them all together in one place. I don't know the fine details of the history of regular expressions. Stephen Kleene and Ken Thompson, who started them, obviously wanted something very compact. Maybe they were into hieroglyphs, maybe they were into cryptography, or maybe that was just the way you did things when you only had a few kilobytes or RAM. PCRE Regular Expression Cheatsheet - Debuggex. Regular Expressions in grep. Searching Files on UNIX On MPE you can display files using the :Print command, Fcopy, Magnet, or Qedit (with pattern match searches). 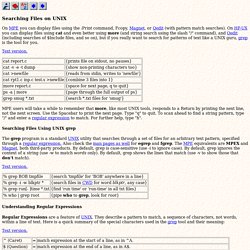 On HP-UX you can display files using cat and even better using more (and string search using the slash "/" command), and Qedit (including searches of $Include files, and so on), but if you really want to search for patterns of text like a UNIX guru, grep is the tool for you. Text version. MPE users will take a while to remember that more, like most UNIX tools, responds to a Return by printing the next line, not the next screen. Use the Spacebar to print the next page. Online regex tester and debugger: PHP, PCRE, Python, Golang and JavaScript. 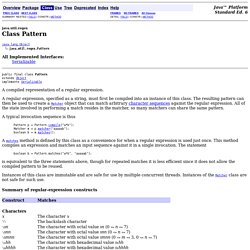 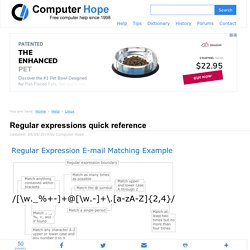 This document describes the most common regular expression symbols, and how to use them. Description Regular expressions (shortened as "regex") are special strings representing a pattern to be matched in a search operation. They are an important tool in a wide variety of computing applications, from programming languages like Java and Perl, to text processing tools like grep, sed, and the text editor vim. The power of regular expressions comes from its use of metacharacters, which are special characters (or sequences of characters) that are used to represent something else. The tables below describe many standard components of regular expressions.