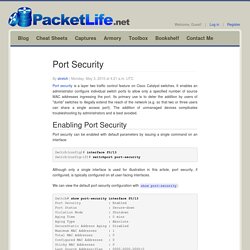 It enables an administrator configure individual switch ports to allow only a specified number of source MAC addresses ingressing the port. Its primary use is to deter the addition by users of "dumb" switches to illegally extend the reach of the network (e.g. so that two or three users can share a single access port). The addition of unmanaged devices complicates troubleshooting by administrators and is best avoided. 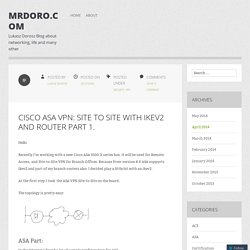 It will be used for Remote Access, and Site-to-Site VPN for Branch Offices. Because from version 8.4 ASA supports ikev2 and part of my branch routers also. I decided play a little bit with an ikev2. Cisco - How to configure an IKEv2 Site to Site IPSEC VPN ? Written on . 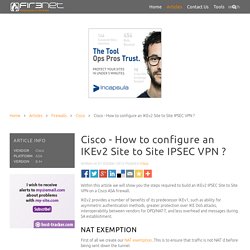 Posted in Cisco Within this article we will show you the steps required to build an IKEv2 IPSEC Site to Site VPN on a Cisco ASA firewall. IKEv2 provides a number of benefits of its predecessor IKEv1, such as ability for asymmetric authentication methods, greater protection over IKE DoS attacks, interoperability between vendors for DPD/NAT-T, and less overhead and messages during SA establishment. NAT Exemption First of all we create our NAT exemption. IPv6 IPv4 network interconnection, NAT-PT (v4-mapped) Hello , I am trying to setup nat-pt so that an ipv6-only network can communicate with an ipv4-only network and vice-versa.. 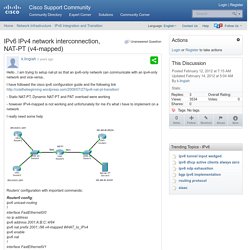 I have followed the cisco ipv6 configuration guide and the following link. EtherChannel considerations. EtherChannel is Cisco's term for bundling two or more physical Ethernet links for the purposes of aggregating available bandwidth and, to a lesser extent, providing a measure of physical redundancy. 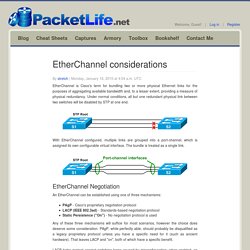 Under normal conditions, all but one redundant physical link between two switches will be disabled by STP at one end. With EtherChannel configured, multiple links are grouped into a port-channel, which is assigned its own configurable virtual interface. The bundle is treated as a single link. EtherChannel Negotiation An EtherChannel can be established using one of three mechanisms: FreeRADIUS Used for Administrative Access on Cisco IOS Configuration Example. Introduction This document describes how to configure RADIUS Authentication on Cisco IOS® switches with a third party RADIUS server (FreeRADIUS). 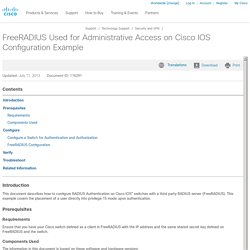 This example covers the placement of a user directly into privilege 15 mode upon authentication. Prerequisites Requirements Ensure that you have your Cisco switch defined as a client in FreeRADIUS with the IP address and the same shared secret key defined on FreeRADIUS and the switch. Components Used The information in this document is based on these software and hardware versions: FreeRADIUSCisco IOS Version 12.2 The information in this document was created from the devices in a specific lab environment. Cisco Network Security Technologies and Solution: IKE Version 2 (IKEv2) based VPN. Author: Sandeep Yadav, CCIE#42053 - Technical Head | CCIE Network Security Consultant, Covenant Network Technologies Pvt Ltd (Inter-networkz), Bangalore. 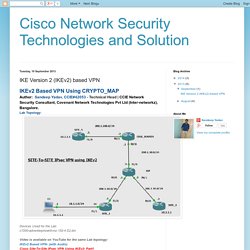 If you are new to the basic concepts of VPN (Virtual Private Network) and IPSec, please learn following lessons before continuing. 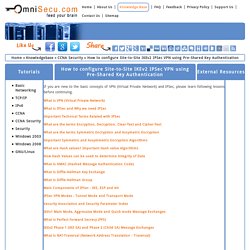 What is VPN (Virtual Private Network) What is IPSec and Why we need IPSec Important Technical Terms Related with IPSec. Cisco ASA Site-to-Site IKEv2 IPSEC VPN - Networklessons.com. IKEv2 has been published in RFC 5996 in September 2010 and is fully supported on Cisco ASA firewalls. 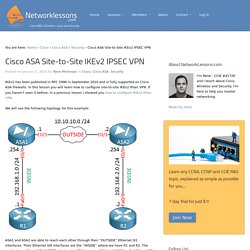 In this lesson you will learn how to configure site-to-site IKEv2 IPsec VPN. If you haven’t seen it before, in a previous lesson I showed you how to configure IKEv2 IPsec VPN. We will use the following topology for this example: ASA1 and ASA2 are able to reach each other through their “OUTSIDE” Ethernet 0/1 interfaces. Their Ethernet 0/0 interfaces are the “INSIDE” where we have R1 and R2. CCNP Studies: Configuring DHCP Snooping. I’ve been enthralled with the security features for Catalyst switches. 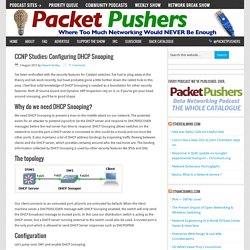 I’ve had to plug away at the theory and lab work recently, but have probably gone a little further down the rabbit hole in this area. I feel that solid knowledge of DHCP Snooping is needed as a foundation for other security features. Both IP Source Guard and Dynamic ARP Inspection rely on it, so if you’ve got your head around snooping, you’ll be in good shape. Cisco IOS SPAN and RSPAN. Cisco Catalyst Switches have a feature called SPAN (Switch Port Analyzer) that lets you copy all traffic from a source port or source VLAN to a destination interface. This is very useful for a number of reasons: If you want to use wireshark to capture traffic from an interface that is connected to a workstation, server, phone or anything else you want to sniff.Redirect all traffic from a VLAN to an IDS / IPS.Redirect all VoIP calls from a VLAN so you can record the calls. The source can be an interface or a VLAN, the destination is an interface.

You can choose if you want to forward transmitted, received or both directions to the destination interface. When you use a destination interface on the same switch as your switch we call it SPAN, when the destination is a remote interface on another switch we call it RSPAN (Remote SPAN). When you use RSPAN you need to use a VLAN that carries the traffic that you are copying. Restrictions. How To Configure DNS Server On A Cisco Router. The DNS protocol is used to resolve FQDN (Fully Qualified Domain Names) to IP addresses around the world.

This allows us to successfully find and connect to Internet websites and services no matter where they are. Its usefulness, however, doesn't stop there: local company and private networks also rely on DNS to operate efficiently and correctly. In many cases, where a local DNS server is not available, we are forced to either use our ISP's DNS servers or some public DNS server, however, this can sometimes prove troublesome. Today, small low-end routers have the ability to integrate DNS functionality, making life easier, but so do Cisco routers - they simply have to be setup and you're done. This article will show you how to configure your Cisco router to provide DNS services to your network, and make all clients use it as a DNS server. Example Scenario Consider the following network diagram. First step is to enable the DNS service and domain lookup on the router: R1# ping wayne. This documentation has been moved - Implementing NAT-PT for IPv6 [Support]

Have putty and puttygen.You have already configured your Cisco device to be able to accept SSH logins using usernames and passwords. Keep your SSH keys in a safe place, treat them like the keys to your house (unless you don’t particularly care about your house).