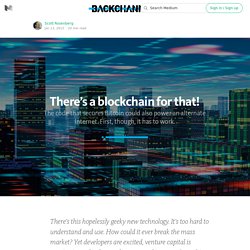 It’s too hard to understand and use. How could it ever break the mass market? Yet developers are excited, venture capital is pouring in, and industry players are taking note. Something big might be happening. Gekaufte Journalisten - gekaufte-journalisten Webseite! In de greep van de BV Hoger Onderwijs. Just In Time For SXSW, Foursquare Ups The Game And Adds Recommendations. We’re now just days away from SXSW. 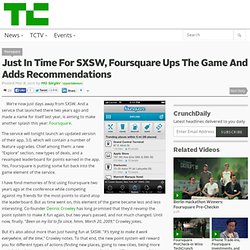 And a service that launched there two years ago and made a name for itself last year, is aiming to make another splash this year: Foursquare. The service will tonight launch an updated version of their app, 3.0, which will contain a number of feature upgrades. Chief among them: a new “Explore” section, new types of deals, and a revamped leaderboard for points earned in the app. Yes, Foursquare is putting some fun back into the game element of the service. Video: Metaio Shows How New Mobile Hardware Benefits AR Performance.

Augmented reality. Yobongo: Forget What Your Parents Said About Not Talking To Strangers. Zenitum. Gowalla 3 Launches For Android Today. Adding existing features like third-party check-in and better photo support, the Austin based company updates the Android version of their location software today. 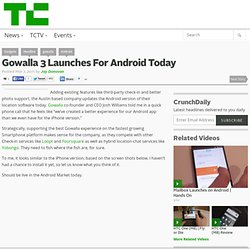 Gowalla co-founder and CEO Josh Williams told me in a quick phone call that he feels like “we’ve created a better experience for our Android app than we even have for the iPhone version.” Strategically, supporting the best Gowalla experience on the fastest growing Smartphone platform makes sense for the company, as they compete with other Check-in services like Loopt and Foursquare as well as hybrid location-chat services like Yobongo.

They need to fish where the fish are, for sure. To me, it looks similar to the iPhone version, based on the screen shots below. Augmented Reality Space Invaders: Expensive. Impossible. Awesome. [Video] Augmented Reality may not be super practical yet. 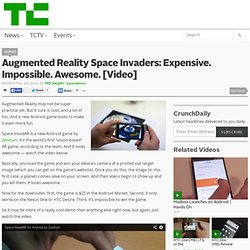 But it sure is cool, and a lot of fun. And a new Android game looks to make it even more fun. Space InvadAR is a new Android game by Zenitum. It’s the world’s first “vision-based” AR game, according to the team. And it looks awesome — watch the video below. Basically, you load the game and aim your device’s camera at a printed out target image (which you can get on the game’s website). Google Maps Navigation For Android Now Routes Around Traffic. Crimsonfox: Augmented reality-powered scavenger hunt in Tokyo (video) Augmented Reality is a pretty hot topic currently, but it seems to me that the Japanese in particular have really embraced the concept of mixing the real world with computer-generated imagery and data. 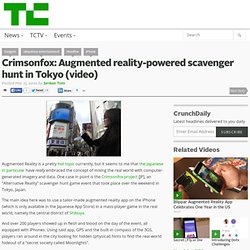 One case in point is the Crimsonfox project [JP], an “Alternative Reality” scavenger hunt game event that took place over the weekend in Tokyo, Japan. The main idea here was to use a tailor-made augmented reality app on the iPhone (which is only available in the Japanese App Store) in a mass-player game in the real world, namely the central district of Shibuya. Junaio Brings Augmented Reality Superbowl Fun. Situationist App By Benrik. Media/Marketing nieuws: Altijd happy hour met locatiediensten. Facebook Privacy. Facebook Suggests You Lie, Break Its Own Terms Of Service To Kee. Here’s a new one. 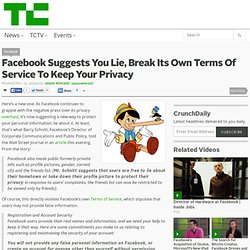 As Facebook continues to grapple with the negative press over its privacy overhaul, it’s now suggesting a new way to protect your personal information: lie about it. At least, that’s what Barry Schnitt, Facebook’s Director of Corporate Communications and Public Policy, told the Wall Street Journal in an article this evening. From the story: Facebook also made public formerly private info such as profile pictures, gender, current city and the friends list.

(Mr. ScienceHistorian cracks "the Plato code" 28 Jun 2010 A science historian at The University of Manchester has cracked “The Plato Code” – the long disputed secret messages hidden in the great philosopher’s writings. 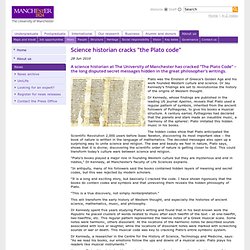 Plato was the Einstein of Greece’s Golden Age and his work founded Western culture and science. Manchester historian deciphers hidden 'Plato Code' A science historian in Manchester claims to have deciphered secret messages hidden in the ancient writings of the philosopher Plato. 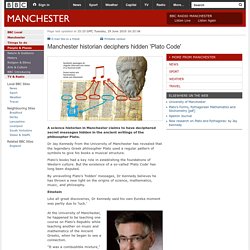 Dr Jay Kennedy from the University of Manchester has revealed that the legendary Greek philosopher Plato used a regular pattern of symbols to give his books a musical structure. Plato's books had a key role in establishing the foundations of Western culture. J. Kennedy Draft Articles. New Research on Plato and Pythagoras Jay Kennedy, University of Manchester Quick Introduction for Non-Experts Introduction for Scholars. 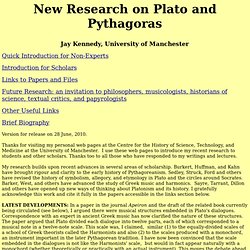 J.B.Kennedy_Apeiron pdf Platos Forms, PythagoreanMathematics, Free Web. The right to link « BuzzMachine. My column in the Guardian argues that we have a right to link and that the link is the basis of freedom of speech online. 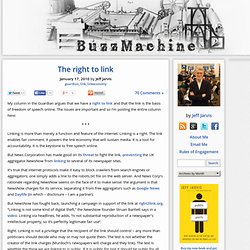 Editors' note: This is a guest column. See Larry Downes' bio below. LAS VEGAS--The Obama administration and its allies at the Federal Communications Commission are retreating from a militant version of Net neutrality regulations first outlined by FCC Chairman Julius Genachowski in September. NetNeutrality AndrewKeen. Michelle MacLaren Michelle MacLaren went from doing almost any job on the set to directing some of the most brutal episodes of Breaking Bad, The Walking Dead and Game of Thrones.

For her, the rougher the better. Pearltrees. Get it. About Pearltrees. FutureNo LogInButton. StudentenVerenigen-NL Wikipedia. Karel de Jong (kareldejong) It's in your hands. Me & EU (itsinyourhands) User locations. Information Visualization. Information Visualization (InfoVis) is an exciting field to watch grow and expand into ever new areas. Protovis. Protovis composes custom views of data with simple marks such as bars and dots.

Unlike low-level graphics libraries that quickly become tedious for visualization, Protovis defines marks through dynamic properties that encode data, allowing inheritance, scales and layouts to simplify construction. Protovis is free and open-source, provided under the BSD License. It uses JavaScript and SVG for web-native visualizations; no plugin required (though you will need a modern web browser)! Many Eyes. MaslowSocial media piramid. The Hot 100 Betas. TWiki - the Open Source Enterprise Wiki.

How Work is Changing with the Open Source Wiki Pioneers: TWiki — YouTube Wants to Put Your Life in a Movie, but You Won’t Get Pai. Two dozen mobile carriers unite against Apple's App Store. Two dozen of the world's largest mobile-phone companies, including Verizon Wireless, AT&T, NTT DoCoMo, Deutsche Telekom, China Mobile and Vodafone, are teaming up to create an "open international applications platform," which is obviously in direct response to Apple's success with its own iPhone App Store. Release. The announcement was made this morning at Mobile World Congress. TradeShift launches to disrupt an entire financial system – And. Google Reader quietly releases “Play”, a new feature for explori.

The top 100 sites on the internet. VideosPosted byLarkin' About: Lost Sport Of Olympia. Thelostring.com. Mapping the growth of the internet. Chrome:Alter BrowsingHistory. Simply put: Google Chrome is amazing. Ever since it was finally released for the Mac late last year, I’ve been blown away by its big things (speed) and little things (search box that is also the URL box). Twitter Turns on “Tweet Your Location”, Mapping Tweets on Twitte. Twitter is in the process of enabling geolocated tweets on Twitter.com. If you have the feature enabled you should notice a “Tweet with your Location” option that uses the Google Maps API to map the tweets. The option gives Twitter users the option of tweeting their location on Twitter.com and then allowing others to view the precise location on Google Maps. Google and Verizon 'near deal to end net neutrality'