Hacking the Wiimote IR camera. You can connect to the Wii remote over bluetooth or use an Arduino to send peripheral data to the Wiimote, but what if you want to interface directly with the Wiimote’s IR camera? 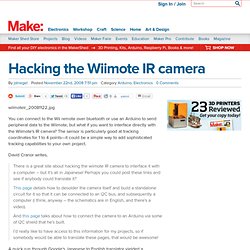 The sensor is particularly good at tracking coordinates for 1 to 4 points—it could be a simple way to add sophisticated tracking capabilities to your own project. David Cranor writes, There is a great site about hacking the wiimote IR camera to interface it with a computer – but it’s all in Japanese! Perhaps you could post these links and see if anybody could translate it? A quick run through Google’s Japanese to English translator yielded a reasonably understandable result: In-depth Wiimote Whiteboard How-to. Now you need to download a program or two from the Internet. 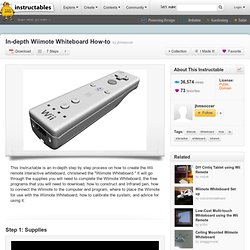 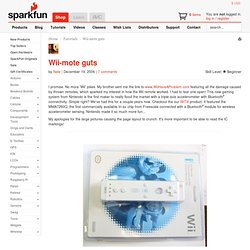 No more 'Wii' jokes. My brother sent me the link to www.WiiHaveAProblem.com featuring all the damage caused by thrown remotes, which sparked my interest in how the Wii remote worked. Translate. Excelent How-To Wii. Interactive digital whiteboard with a Nintendo Wii remote controler and infrared LED pen. 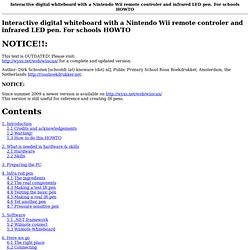 For schools HOWTO This text is OUTDATED! Please visit: for a complete and updated version. Author: Dirk Schouten [schoutdi (at) knoware (dot) nl], Public Primary School Rosa Boekdrukker, Amsterdam, the Netherlands. Do-it-yourself project to use a Wii remote controller, Wiiscan software and USB powering for a digital interactive whiteboard in classrooms. Johnny's splendid idea will almost certainly not function in a classroom, crowded with eager pupils and a teacher willing to educate them. 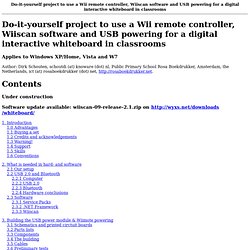 Sooner or later one of them would touch the Wii remote controller (Wiimote from now on), causing recalibration and thus the end of the lesson. Or, at the wrong moment of course, the batteries are empty and a pupil has to find fresh ones; unfortunately unavaiable. Or, starting up a program would fail because of some error, somehow during the operation. In classrooms Murpy's law is at its best! Arduino Pro Mini + Wii Motion Plus. Dimensions of the Wii Motion Plus are quite similar to Arduino Pro Mini card’s one. 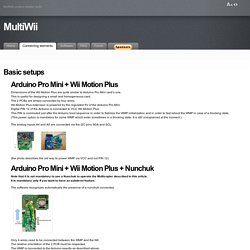 This is useful for designing a small and homogeneous card. The 2 PCBs are simply connected by four wires. Wii Motion Plus extension is powered by the regulated 5V of the Arduino Pro Mini. Digital PIN 12 of the Arduino is connected to VCC Wii Motion Plus. This PIN is commuted just after the Arduino boot sequence in order to fiabilize the WMP initialization and in order to fast reboot the WMP in case of a blocking state. The analog inputs A4 and A5 are connected via the I2C pins SDA and SCL. (the photo describes the old way to power WMP via VCC and not PIN 12) Prototype: Bus Pirate BPv3. UPDATE: v3b is the latest Bus Pirate revision, read about the changes here. 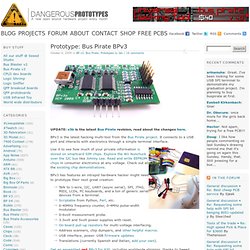 BPv3 is the latest hacking multi-tool from the Bus Pirate project. It connects to a USB port and interacts with electronics through a simple terminal interface. Use it to see how much of your private information is stored on smartcard SIM chips. Explore the Wii Nunchuck over the I2C bus like Johnny Lee. Read and write EEPROM chips in consumer electronics at any voltage. BPv3 has features an intrepid hardware hacker might need to prototype their next great creation: Johnny Lee's Wii Smartboard: building it. Wiimote Wireless Modification for Persons with Disabilities. The materials for this step are as requires: • 2 Arduino Duemilanove USB Boards (Sparkfun, SKU: DEV-00666) • 2 Arduino Xbee Empty Shields (Sparkfun, SKU: DEV-09063) • 2 Xbee 1 mW Chip Antenna (Sparkfun, SKU: WRL-08664) • 1 Standard USB Cable A-B (Adafruit Industries) • X-CTU Software (www.Digi.com) • Arduino Software (www.Arduino.cc)• 1 9V Regulated DC Wall Power Adapter (Adafruit Industries) • 1 9V Battery Holder with Switch and 2.1 mm Plug (Adafruit Industries) • 1 9V Battery The first step is to configure the Xbee chips so that they are able to communicate effectively with each other. 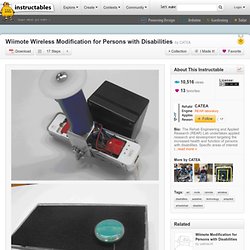 Xbee chip configuration requires the X-CTU Software. 1. Download and install the X-CTU Software from the Digi website 2. Wii IR camera as standalone sensor. The Wii Remote became a very intersting tool for hacking and other uses where it not has been mentioned for. After the first hacks appears in the internet a lot of people are doing great stuff with it. Working with the PixArt camera directly.

This has been a pretty whirlwind past few months. 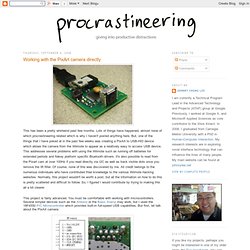 Lots of things have happened, almost none of which procrastineering related which is why I haven't posted anything here. But, one of the things that I have poked at in the past few weeks was creating a PixArt to USB-HID device which allows the camera from the Wiimote to appear as a relatively easy to access USB device. This addresses several problems with using the Wiimote such as running off batteries for extended periods and flakey platform specific Bluetooth drivers.

It's also possible to read from the Pixart cam at over 100Hz if you read directly via I2C as well as track visible dots once you remove the IR filter. Of course, none of this was discovered by me. Wii IR Camera System. February 2011 Wii IR Camera Control Board Overview While completing my Senior Design project in Electrical Engineering at the University of Pennsylvania (see “R.A.V.E.N.”), an interface board was required to connect to a Wii IR camera. 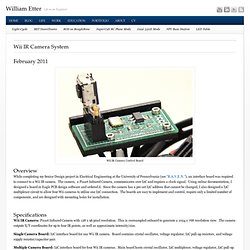 The camera, a Pixart Infrared Camera, communicates over I2C and requires a clock signal. Using online documentation, I designed a board in Eagle PCB design software and ordered it. Specifications. Wii IR camera as standalone sensor. Infrared Remote Library. Do you want to control your Arduino with an IR remote? Do you want to use your Arduino to control your stereo or other devices? This IR remote library lets you both send and receive IR remote codes in multiple protocols. It supports NEC, Sony SIRC, Philips RC5, Philips RC6, and raw protocols. Do-it-yourself project to use a Wii remote controller, Wiiscan software and USB powering for a digital interactive whiteboard in classrooms.