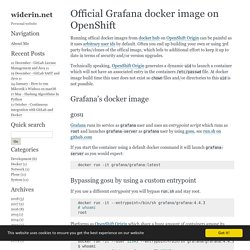 Often you end up building your own or using 3rd party forks/clones of the offical image, which leds to additional effort to keep it up to date in terms of security and/or version upgrades. Technically speaking, OpenShift Origin generates a dynamic uid to launch a container which will not have an associated entry in the containers /etc/passwd file. At docker image build time this user does not exist so chown files and/or directories to this uid is not possible. Grafana’s docker image. Application monitoring in OpenShift with Prometheus and Grafana - ConSol Labs. How to gather and display metrics in Red Hat OpenShift.

This post will show how to gather Apache Spark Metrics with Prometheus and display the metrics with Grafana in OpenShift 3.9. 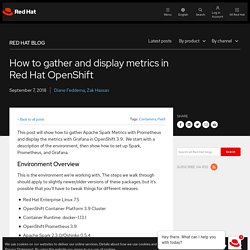 We start with a description of the environment, then show how to set up Spark, Prometheus, and Grafana. Environment Overview This is the environment we’re working with. The steps we walk through should apply to slightly newer/older versions of these packages, but it’s possible that you’ll have to tweak things for different releases. Origin/examples/grafana at master · openshift/origin. Package origin-clients - man pages. Package origin-clients - man pages. OpenShift - Who has a Kubernetes problem? OpenShift - Who has a Kubernetes problem? Features/OpenShift Origin - Fedora Project Wiki. Summary OpenShift Origin is a cloud application platform as a service (PaaS). 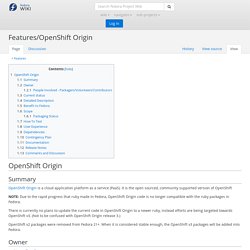 It is the open sourced, community supported version of OpenShift NOTE: Due to the rapid progress that ruby made in Fedora, OpenShift Origin code is no longer compatible with the ruby packages in Fedora. Thailand’s Ascend Money finds agility with OpenShift. OpenShift/Kubernetes tutorial - Infinispan. This tutorial needs to be executed in either OpenShift or Kubernetes. 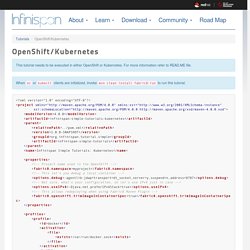 For more information refer to READ.ME file. When oc or kubectl clients are initialized, invoke mvn clean install fabric8:run to run this tutorial. Openshift limits explained. Openshift is a Paas platform offered by Red Hat based mainly on Docker and Kubernetes. 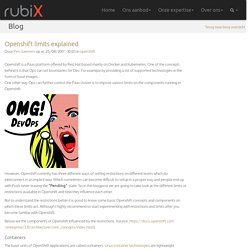 One of the concepts behind it is that Ops can set boundaries for Dev. For example by providing a list of supported technologies in the form of base images. One other way Ops can further control the Paas cluster is to impose various limits on the components running in Openshift. However, Openshift currently has three different ways of setting restrictions on different levels which do interconnect in an implicit way. Which sometimes can become difficult to setup in a proper way and people end up with Pods never leaving the “Pending” state. How Red Hat and OpenShift navigate a hybrid cloud world. The sky may be the limit for cloud computing, but it still helps to have an idea of how to get there. 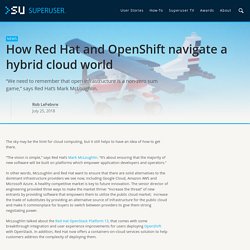 “The vision is simple,” says Red Hat’s Mark McLoughlin. “It’s about ensuring that the majority of new software will be built on platforms which empower application developers and operators.” In other words, McLoughlin and Red Hat want to ensure that there are solid alternatives to the dominant infrastructure providers we see now, including Google Cloud, Amazon AWS and Microsoft Azure. A healthy competitive market is key to future innovation.

The senior director of engineering provided three ways to make the market thrive: “increase the threat” of new entrants by providing software that empowers them to utilize the public cloud market; increase the trade of substitutes by providing an alternative source of infrastructure for the public cloud and make it commonplace for buyers to switch between providers to give them strong negotiating power. .openshift · master · Mike Macgirvin / osada. Osada Switch branch/tag. 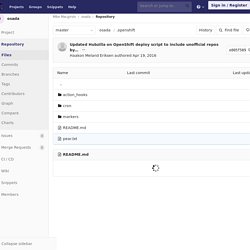 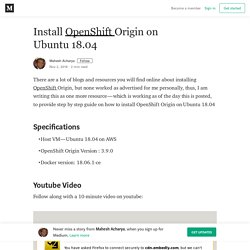 10 most important differences between OpenShift and Kubernetes cloudowski.com. UPDATED on 10.6.2019 (after the release of OpenShift 4.1): Added information on OpenShift 4. 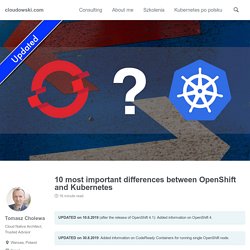 UPDATED on 30.8.2019: Added information on CodeReady Containers for running single OpenShift node. If you’re interested in OpenShift 4 please check out also my honest review of it. OpenShift has been often called as “Enterprise Kubernetes” by its vendor - Red Hat. In this article, I’m describing real differences between OpenShift and Kubernetes. It’s often confusing, as Red Hat tends to describe it as PaaS, sometimes hiding the fact that Kubernetes is an integral part of OpenShift with more features built around it.

Kubernetes is an open source project (or even a framework), while OpenShift is a product that comes in many variants. There are a couple of them: Red Hat OpenShift Container Platform   This solution introduces Red Hat OpenShift Container Platform and the benefits of running OpenShift on Google Cloud Platform (GCP), such as: OpenShift enables running and supporting stateful and stateless apps without needing to completely re-architect your app.OpenShift uses the Red Hat Enterprise Linux operating system as its foundation, providing a stable and secure foundation for your apps.OpenShift natively integrates technologies such as Docker and Google Kubernetes Engine (GKE), a powerful cluster manager and orchestration system for running your Docker containers. 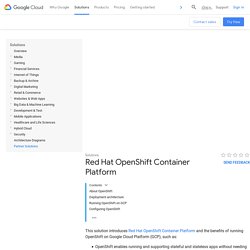 Lightning fast deployments included. Series preview (all episodes): The code is simple enough, so no slides were necessary to illustrate the ideas. See you at Web, MicroProfile and Java EE Workshops at Munich Airport, Terminal 2 or Virtual Dedicated Workshops / consulting. OpenShift 101: a short intro by Exoscale. OpenShift is to Kubernetes similar to what a Linux distribution is to the kernel. The world is talking about the Kubernetes Project - but did you hear about OpenShift? It’s an open source product based on the open source projects Kubernetes and Docker plus a container builder/registry, and a Web GUI to manage it all. NFT in Private Cloud Case Study.

Architecting your first OpenStack cloud. OpenStack is the most popular open-source cloud computing platform to build and manage infrastructure-as-a-service (IaaS) environments. Since its inception in 2010 by Rackspace Hosting and NASA this project has gained popularity and positioned itself as a reliable alternative to proprietary IaaS platforms.

Now under the management of the OpenStack Foundation and with more than 30,000 Individual Members from over 170 countries around the world, OpenStack is thriving and increasing its presence in enterprise IT environments. In this article, I will be sharing best practices for the adoption of OpenStack as your IaaS platform and the necessary steps to take while building your cloud. In my experience, thorough planning is an essential ingredient for a successful cloud initiative. Identify your Business Objectives Adoption in an enterprise implies an investment of people and money. Enterprise cloud computing technology has fueled digital transformation. Untitled. Content.pivotal. At the end of the year there's no end of predictions from the IT analyst would.

In this episode, Richard and I talk with Pivotal's head analyst relations, Rita Manachi. We cover predictions in software development, infrastructure and cloud, and handful of miscellaneous ones like AI. Just for funsies, each of us throws in a prediction as well, plus a bonus book recommendation to start the new year with. DevOps & machine learning improves app performance! Programming & DevOps news, tutorials & tools. Red Hat Helps Power Tata Communications’ IZO™ Private Cloud with OpenShift and OpenStack.

Red Hat OpenShift Container Platform 3.10 is now available. Today, we’re pleased to announce the general availability of Red Hat OpenShift Container Platform 3.10 (read the release notes; download the new version). Every release of OpenShift contains hundreds of fixes for enhanced security and performance, tested integrations throughout the stack, and access to hundreds of validated ISV solutions. For a full walkthrough of the latest updates, you can view our latest OpenShift Commons Briefing. Strengthening capabilities for intelligent, compute-intensive applications In this release, we’ve built on prior work and strengthened our capabilities for running computationally intensive workloads such as artificial intelligence, machine learning, animation, and financial services and payments applications.