Foreign Places We want to Go

BEFORE THEY PASS AWAY. The purity of humanity exists.

It is there in the mountains, the ice fields, the jungle, along the rivers and in the valleys. Jimmy Nelson found the last tribesmen and observed them. He smiled and drank their mysterious brews before taking out his camera. Death-Defying Pathways Along China's Yellow Mountain. Would you be brave enough to trek a pathway called The Bridge of Immortals? 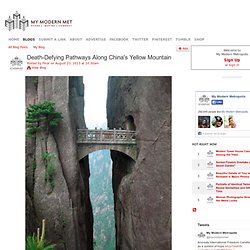 Situated in Huangshan (aka Yellow Mountain), a mountain range in the southern Anhui province of eastern China, the bridge, above, is located at a vertigo-inducing height between two giant, jagged granite peaks that dares adventures to cross its path. It is not the only risky walkway along the mountain range, though. Cenote Angelita: An Underwater River Photographed by Anatoly Beloshchin. It seems improbable, but these photographs by Anatoly Beloshchin tell the story of a hidden underwater river in in Mexico’s Yucatan Peninsula called Cenote Angelita or “Little Angel”. 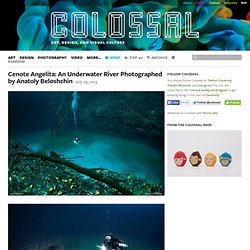 While it appears as though the divers are hovering in the air above a small creek, the photos were shot entirely in a submerged cave formed from collapsed limestone bedrock called a cenote. The river itself is actually a sort of illusion due to a phenomenon called a halocline, where waters with different levels of salinity form into layers because of a variation in density. According to Beloshchin, Cenote Angelita is comprised of fresh water until about 29 meters when it switches to a 1-meter layer of hydrogen sulfide, after which the entire cave bottom is filled with saltwater from 30 to 60 meters deep. Five unforgettable rail journeys : Australia. There are few more memorable ways to travel than by train. 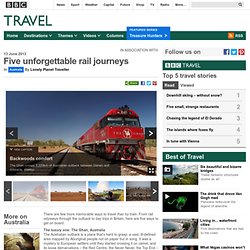 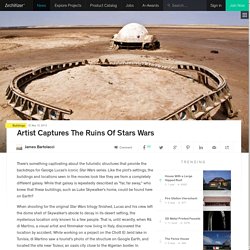 Like the plot's settings, the buildings and locations seen in the movies look like they are from a completely different galaxy. While that galaxy is repeatedly described as "far, far away," who knew that these buildings, such as Luke Skywalker's home, could be found here on Earth? Splash out: the world’s most amazing waterfalls. The bigger they are, the harder they fall – feel the power of the planet's mightiest and most beautiful waterfalls. 1. 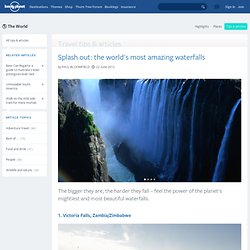 Victoria Falls, Zambia/Zimbabwe. Most beautiful abandonned places on earth. Villa Epecuen: The Town That Was Submerged For 25 Years. Back in the 1920s, a tourist village named Villa Epecuen was established along the shore of Lago Epecuen, a salt lake some 600 kilometers southwest of Buenos Aires, Argentina. 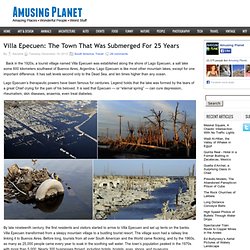 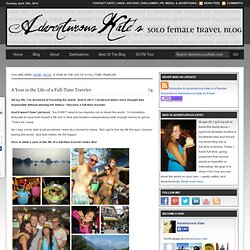 And in 2011, I achieved what I once thought was impossible without winning the lottery: I became a full-time traveler. And it wasn’t how I pictured. You DON’T need to be insanely rich to travel the world. I’m incredibly fortunate to have built myself a life rich in time and location independence with enough money to get by. So I may not be able to jet anywhere I want at a moment’s notice. How to Make Money While Traveling.

Wanna travel for a long period of time but have no money to do so? 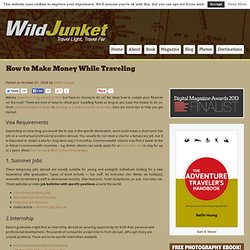 No ideas how to sustain your finances on the road? There are tons of ways to refuel your travelling funds as long as you have the means to do so. From teaching English in Spain to working as a dive instructor in Borneo, here are some tips to help you get started. The Ultimate Travel Hacking Guide - StumbleUpon. Referring to this quote: "On our example, this doesn't work because we are going from the United States to England and the English Pound is worth more than the US dollar. 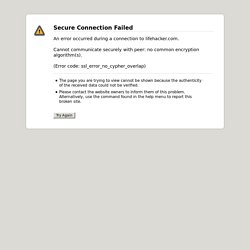 Thrill : Unusual & Unique Hotels of the World. Home : Unusual & Unique Hotels Of The World. The Other Mystery of Easter Island. Moai statues Easter Island is branded into popular consciousness as the home of the mysterious and towering moai statues, but these are not the only curiosity the South Pacific island holds. Where the moai are fascinating for their unknown purpose and mysterious craftsmen, the island's lost language of Rongorongo is equally perplexing. The unique written language seems to have appeared suddenly in the 1700s, but within just two centuries it was exiled to obscurity.

Known as Rapa Nui to the island's inhabitants, Rongorongo is a writing system comprised of pictographs. It has been found carved into many oblong wooden tablets and other artifacts from the island's history. In 1864, Father Joseph Eyraud became the first non-islander to record Rongorongo. 12 of the World’s Most Mysterious Monuments & Ruins. 12 of the World’s Most Mysterious Monuments & Ruins Article by Steph, filed under Abandoned Places in the Architecture category. Around the world, in places as diverse as Homestead, Florida and Yonaguni, Japan stand monuments and ruins whose origins are shrouded in mystery. Nobody knows exactly why Stonehenge was built, how a set of manmade ruins came to be submerged deep in the ocean or who commissioned a giant carved granite set of post-apocalyptic instructions for rebuilding society on a remote hill in Georgia.

Monumental Instructions for the Post-Apocalypse (images via: Wired) The Mysterious Dancing Forest of Kaliningrad. Located on the thin Curonian Spit that splits the Curonian Lagoon from the Baltic Sea, lies one of the strangest natural phenomena on Earth. Known as the Dancing Forest by caretakers of Curonian Spit National Park and as the Drunken Forest, by locals, this unusual pine forest is made of trees of various shapes, most of them twisted in circles and spirals, along the ground.

According to tourists, the Dancing Forest looks more like a site near Chernobyl, with 20-year-old pines tied into natural knots and loops, like lumpy contortionists. A few years ago, the park manager invited students from local universities to conduct studies, and get to the bottom of the mystery. Since then, several theories emerged, including one suggested by a psychic who said the forest is located on a spot where massive amounts of positive and negative energies collide. Others say the causes are geological, that it must have something to do with the unstable sandy soil. [Photo Credits] [Photo Credits] [Photo Credits] Ten Strange Places. Untapped Cities. Silencio. Nations & Countries.

Magical Uba Jabuticaba Tree. Jabuticaba. The Jabuticaba (Portuguese pronunciation: [ʒabutiˈkabɐ or ʒabutʃiˈkabɐ]) (Plinia cauliflora) is a fruit-bearing tree in the family Myrtaceae native to Minas Gerais and São Paulo states in southeastern Brazil. Related species in the genus Myrciaria, often referred to by the same common name, are native to Brazil, Argentina, Paraguay, and Bolivia. The tree is grown for its purplish-black, white-pulped fruits; they can be eaten raw or be used to make jellies and drinks (plain juice or wine).

It was mostly demolished in 1820: its remains are now part of Villa Demidoff, 12 km north of Florence, reached from the main road to Bologna. History[edit] The villa was built by the solitary Francesco I de' Medici, Grand Duke of Tuscany in part to please his Venetian mistress, the celebrated Bianca Capello. The designer of villa and gardens was his court architect- designer- mechanician- engineer Bernardo Buontalenti, who completed it in a single campaign that lasted from 1569 to 1581; it was finished enough to provide the setting for Francesco's public wedding to Bianca Cappello in 1579.

Francesco had assembled most of the property, which was not a hereditary Medici possession, by September 1568,[1] and construction began the following spring. Notes[edit] Colosso dell'appennino di giambologna. Lavender fields of France.

999 Lists to complete before you die

In America. Zombie SWAT Training - Zombie Battle London (as seen on TOWIE) Description Current Availability[Updated: May 2013] Please book ASAP - this experience gets booked up fast! The Zombie Battle Experience in London currently runs on 1 Saturday and 2 Sundays per month. 2.8 Hours Later - Asylum - Home. 2.8 Hours Later: Asylum - The Ultimate Zombie Infection Experience. If you’re a horror flick fan, you probably remember 28 Days Later, one of the best, most realistic zombie movies ever made.

It told the story of a small group of survivors fighting for their lives in zombie-infested England. Now, a game company is giving people the chance to experience their fear in an adrenaline-packed street game called 2.8 Hours Later. Run For Your Lives - 5K Zombie Obstacle Race. If you’re a big fan of zombie movies and video games, and always wanted to experience a zombie apocalypse in real life, this is your big chance. Run For Your Lives is a unique 5k obstacle course race where contenders have to get passed man-made and natural obstacles while chased by brain-eating zombies. 20 free attractions in London. Who cares if London's hotels and restaurants tend to be on the expensive side?