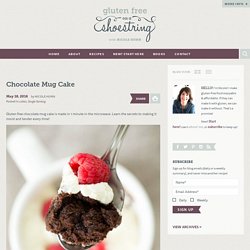 Learn the secrets to making it moist and tender every time! I think you’ll agree that most recipes for a chocolate mug cake are rubbery and just plain unappetizing. But it doesn’t have to be that way! Remember when we made a Flourless Chocolate Cake for 1 with just 3 simple ingredients? So, so good. Bottom line: A moist and tender gluten free chocolate mug cake can be done! There are, of course, a few secrets to success. So here’s the deal: First secret to success: what’s not in there. Second secret to success: adding a bit of chocolate in the middle of the batter. And that’s not all… My third and final secret to success: Adjusting the power of your microwave to approximate 1000 watts by microwaving at a reduced power level if necessary. Bloglovin. Healthy Zucchini Brownies. Holy decadent dessert! 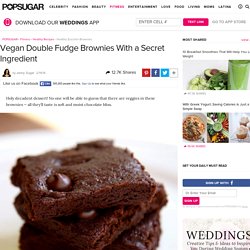 No one will be able to guess that there are veggies in these brownies — all they'll taste is soft and moist chocolate bliss. Instead of grating the zucchini, it's pureed, resulting in a smoother consistency. Even the most keen sense of taste buds won't be able to detect that there are veggies in all that double chocolatey goodness. These melt-in-your-mouth moist, rich, and fudgey brownies taste so sinful, you'll be amazed that they're vegan and just over 150 calories. Aside from the fiber, potassium, and vitamin C offered by the zucchini, the dark chocolate is also full of antioxidants. 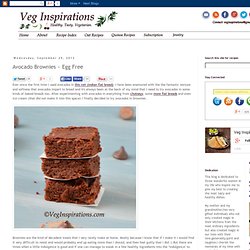 After experimenting with avocados in everything from chutneys, some more flat breads and even ice cream (that did not make it into this space) I finally decided to try avocados in brownies . Brownies are the kind of decadent treats that I very rarely make at home. Mostly because I know that if I make it I would find it very difficult to resist and would probably end up eating more than I should, and then feel guilty that I did :) But there are times when a little indulgence is good and if one can manage to sneak in a few healthy ingredients into the "indulgence" to make it a tad bit healthier than it's even better.

Click here for the printable version of this recipe Pre heat oven to 350 deg F (approx 180 deg C) Flourless Chocolate Cake, Recipe from Everyday Food, January/February 2004. Busy-Day Chocolate Cake Recipe. Cream-Cheese Brownies, Recipe from Everyday Food, May 2007. Low Sugar and Whole Wheat Chocolate Zucchini Bread Recipe. Chocolate Pudding Cake. Eat like a Dietitian. The idea of baking chocolate brownies made of red kidney beans without flour sounds a bit weird at first but once you try a piece you’ll understand how delicious and nutritious this treat could be! 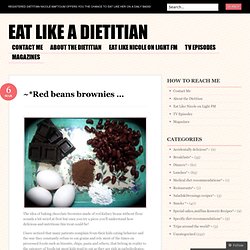 I have noticed that many patients complain from their kids eating behavior and the way they constantly refuse to eat grains and rely most of the times on processed foods such as biscuits, chips, pasta and others, that belong in reality to the category of foods tat most kids tend to eat as they are rich in carbohydrates. As food neophobia (fear of introducing new foods) is prevalent amongst a high percentage of those kids, I thought about developing this recipe that’s rich in proteins, fiber and low in fat and calories when compared to a regular piece of chocolate brownies. Beans are a very good source of Manganese, Iron, thiamin (Vitamin B1), folic acid and proteins.