Interstellar's Hidden Meaning Behind Love and Time. Interstellar Themes. A major theme in Interstellar is that of isolation and loneliness, and how they test our ability to think rationally and operate from an ethical standpoint as opposed to a mere survivalist one. Over the course of the film, some characters, like Dr.

Mann, abandon everything they stand for in order to stay alive. Others become more animalistic and revert back to instinctual needs, as when Romilly and Cooper listen to the sound of rainfall and crickets to help them cope with their distance from Earth. Another example of these themes is showcased by characters who feel alone even while surrounded by others: Cooper, for example, is a NASA pilot, not a farmer, and so he feels out of place as a farmer helping his community and raising his kids alone. When he's offered the opportunity to venture into space, he can't help but chomp at the bit, and through this we see his longing to be back in the much bigger fields for which he feels he was destined. 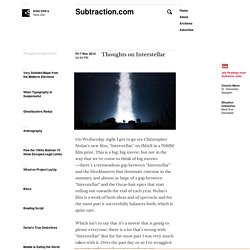 This is a big, big movie, but not in the way that we’ve come to think of big movies—there’s a tremendous gap between “Interstellar” and the blockbusters that dominate cinemas in the summer, and almost as large of a gap between “Interstellar” and the Oscar-bait epics that start rolling out towards the end of each year. Nolan’s film is a work of both ideas and of spectacle and for the most part it successfully balances both, which is quite rare. Which isn’t to say that it’s a movie that is going to please everyone; there is a lot that’s wrong with “Interstellar.” But for the most part I was very much taken with it. The science of Interstellar: 5 TED-Ed Lessons to help you understand the film.

(1) Interstellar Movie Director Christopher Nolan Analysis On Story & Construction Of 'Memento' ‘Interstellar’: The Cinema of Physicists. “Some might say, ‘Why quibble? 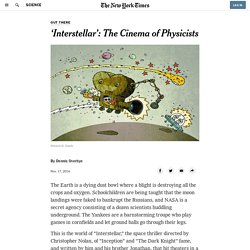 It’s just a movie'” said David H. Grinspoon of the Planetary Science Institute in Tucson, Ariz., and a participant in the 2006 workshop, who complained of sloppy planetary science in the movie. Even with a voracious blight, he said, it would take millions of years to draw down Earth’s oxygen. “So why did they take care with relativity but not even bother with planetary science?” He went on. As a moviegoer, I have a high tolerance for artistic license and wild ideas. It is hard for me to imagine, for example, a discredited and underground NASA able to launch rockets to another galaxy, scouting expeditions through the wormhole, spending trillions of dollars without anyone knowing. Nor does it seem plausible to me that there seems to be about one theoretical physicist left in the world, who happens to be Professor Brand (Michael Caine), Cooper’s old teacher and NASA’s leader. 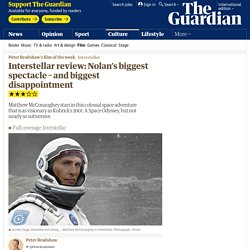 Not Christopher Nolan, for whom even big or bigger won’t cut it. His new picture is his biggest: biggest event, biggest spectacle, biggest pastiche, biggest disappointment. It’s a colossal science-fiction adventure avowedly in the high visionary-futurist style of Kubrick’s 2001, but sugared up with touches of M Night Shyamalan. Nolan takes on the idealism and yearning from 2001, but leaves behind the subversion, the disquiet and Kubrick’s real interest in imagining a post-human future. Interstellar review: Christopher Nolan's best film. Interstellar: In-depth analysis of its concept and multiple hidden themes – Muvighost.