The issue of Immigration affecting US elections. Mexican Immigration to US Lowest in 40 Years. More Mexicans are leaving the U.S. than entering, says a recent study. 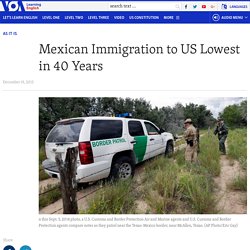 The report from the Pew Research Center was released as some presidential candidates talk about building a wall between the U.S. and Mexico. Clinton, Trump Are a Study in Contrasts. American businessman Donald Trump and former Secretary of State Hillary Clinton are likely to face each other in the U.S. presidential election this year. 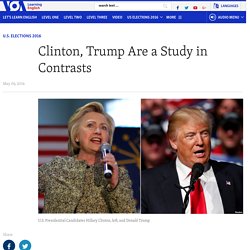 Both candidates call New York State their home. But that might be the only thing they have in common. Donald Trump came from a wealthy family. He is known for building hotels and casinos around the world. The businessman says that the U.S. political system is broken and it will take a non-politician like himself to fix it. Trump is the likely presidential candidate of the Republican Party. On Thursday, Paul Ryan, the Speaker of the House of Representatives, said he is “not ready” to support Trump as the nominee. Hillary Clinton grew up in a middle class family near Chicago. 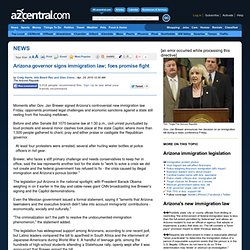 Jan Brewer signed Arizona's controversial new immigration law Friday, opponents promised legal challenges and economic sanctions against a state still reeling from the housing meltdown. Before and after Senate Bill 1070 became law at 1:30 p.m., civil unrest punctuated by loud protests and several minor clashes took place at the state Capitol, where more than 1,500 people gathered to chant, pray and either praise or castigate the Republican governor.

At least four protesters were arrested, several after hurling water bottles at police officers in riot gear. Brewer, who faces a stiff primary challenge and needs conservatives to keep her in office, said the law represents another tool for the state to "work to solve a crisis we did not create and the federal government has refused to fix - the crisis caused by illegal immigration and Arizona's porous border. " Arizona Enacts Stringent Law on Immigration. The move unleashed immediate protests and reignited the divisive battle over immigration reform nationally. 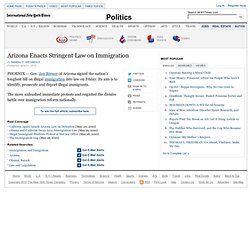 Even before she signed the bill at an afternoon news conference here, strongly criticized it. Speaking at a naturalization ceremony for 24 active-duty service members in the Rose Garden, he called for a federal overhaul of immigration laws, which Congressional leaders signaled they were preparing to take up soon, to avoid “irresponsibility by others.” The Arizona law, he added, threatened “to undermine basic notions of fairness that we cherish as Americans, as well as the trust between police and our communities that is so crucial to keeping us safe.”

The law, which proponents and critics alike said was the broadest and strictest immigration measure in generations, would make the failure to carry immigration documents a crime and give the police broad power to detain anyone suspected of being in the country illegally. The political debate leading up to Ms. Human flows at the border. Overview of the border. VOA report. Hispanic Population in the USA. 11 Classic Works Of Art Re-Imagined With People Of Color. The Hispanic Influence on America. Commentary: What Would America be like Without Hispanics? Author: Stephen Balkaran, is an Instructor in the department of Philosophy & Political Science at Quinnipaic University Famed African American author Ralph Ellison once posed an intriguing question: What would America be like without blacks? 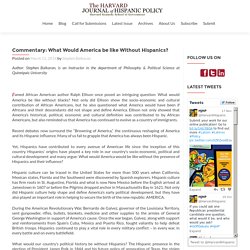 Not only did Ellison show the socio-economic and cultural contribution of African Americans, but he also questioned what America would have been if Africans and their descendants did not shape and define America. Ellison not only showed that America’s historical, political, economic and cultural definition was contributed to by African Americans, but also reminded us that America has continued to evolve as a country of immigrants. Recent debates now surround the “Browning of America,” the continuous reshaping of America and its Hispanic influence. Many of us fail to grapple that America has always been Hispanic.

Yet, Hispanics have contributed to every avenue of American life since the inception of this country. Likewise, Dr.