Hemingway and the war

Somme 'Iron Harvest' will take 500 years to clear, say bomb disposal experts on centenary of bloody battle. World War 1 (in One Take) BBC Bitesize - What was it like in a World War One trench? Mini BIO - Ernest Hemingway. Michael Palin's Hemingway Adventure. Short Story Podcast: Short Story Podcast: Julian Barnes reads Homage To Switzerland by Ernest Hemingway. Barnes on Hemingway I chose Ernest Hemingway because he is deeply out of fashion, still over-admired by the literary boys-with-toys brigade, still shunned by women readers put off by the macho myth. 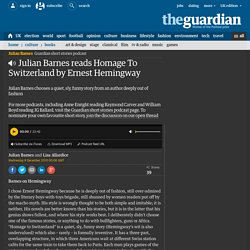 His style is wrongly thought to be both simple and imitable; it is neither. His novels are better known than his stories, but it is in the latter that his genius shows fullest, and where his style works best. Ernest Hemingway - Biography - Author - Biography.com. Nobel Prize winner Ernest Hemingway is seen as one of the great American 20th century novelists, and is known for works like A Farewell to Arms and The Old Man and the Sea. 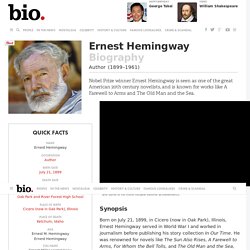 Synopsis Born on July 21, 1899, in Cicero (now in Oak Park), Illinois, Ernest Hemingway served in World War I and worked in journalism before publishing his story collection In Our Time. He was renowned for novels like The Sun Also Rises, A Farewell to Arms, For Whom the Bell Tolls, and The Old Man and the Sea, which won the 1953 Pulitzer. In 1954, Hemingway won the Nobel Prize.