The content reader for power users who want to save time. Republican ‘Abstinence-Only’ Crusader’s 17-Year-Old Daughter Is Pregnant. A Republican lawmaker who promoted legislation to teach “abstinence-only” sex education in schools announced that his own unmarried high school-aged daughter has gotten pregnant. 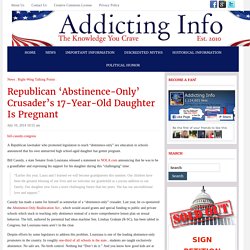 Bill Cassidy, a state Senator from Louisiana released a statement to NOLA.com announcing that he was to be a grandfather and expressing his support for his daughter during this “challenging” time: “Earlier this year, Laura and I learned we will become grandparents this summer. Our children have been the greatest blessing of our lives and we welcome our grandchild as a joyous addition to our family. Our daughter now faces a more challenging future than her peers. She has our unconditional love and support.” 17 Lies We Need to Stop Teaching Girls About Sex. Whether it's the constant fretting over Miley Cyrus' influence on school girls or the growing (and troubling) tradition of Purity Balls, it's clear that society has a fascination with young women's sexuality — especially when it comes to controlling it. 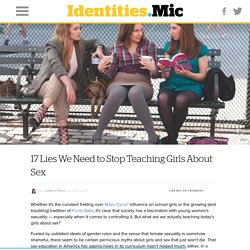 But what are we actually teaching today's girls about sex? Fueled by outdated ideals of gender roles and the sense that female sexuality is somehow shameful, there seem to be certain pernicious myths about girls and sex that just won't die. That sex education in America has gaping holes in its curriculum hasn't helped much, either; in a recent Centers for Disease Control (CDC) report just 6 out of 10 girls said that their schools' sex ed program included information on how to say no to sex. This lack of personal agency was reflected in a forthcoming study by sociologist Heather Hlavka at Marquette University as well, which found that many young girls think of sex simply as something that is "done to them.

" 17 Lies We Need to Stop Teaching Boys About Sex. Editor’s Note: This article was written to address the messages that cisgender, mostly heterosexual men receive about sexuality. 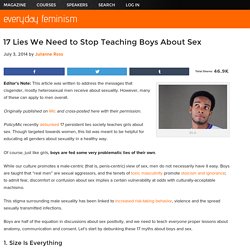 However, many of these can apply to men overall. Originally published on Mic and cross-posted here with their permission. PolicyMic recently debunked 17 persistent lies society teaches girls about sex. Though targeted towards women, this list was meant to be helpful for educating all genders about sexuality in a healthy way. Of course, just like girls, boys are fed some very problematic lies of their own. While our culture promotes a male-centric (that is, penis-centric) view of sex, men do not necessarily have it easy.

This stigma surrounding male sexuality has been linked to increased risk-taking behavior, violence and the spread sexually transmitted infections. Boys are half of the equation in discussions about sex positivity, and we need to teach everyone proper lessons about anatomy, communication and consent. 1. Lastly, sexual chemistry trumps size any day. 7 Interesting Things to Know About Condoms. Photo Credit: Shutterstock June 15th marks the beginning of National Men’s Health Week. 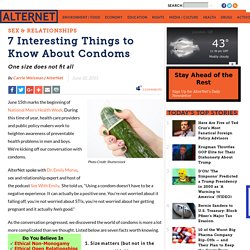 During this time of year, health care providers and public policy makers work to heighten awareness of preventable health problems in men and boys. We’re kicking off our conversation with condoms. AlterNet spoke with Dr. Emily Morse, sex and relationship expert and host of the podcast Sex With Emily. Fighting For Accurate Sex Education. Last week, President Obama said he is eliminating $85 million for abstinence only sex education from the Federal Budget for 2017. 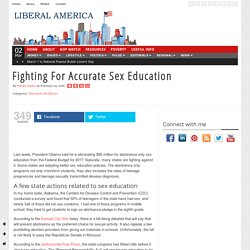 Naturally, many states are fighting against it. Some states are adopting better sex education policies. The abstinence only programs not only misinform students, they also increase the rates of teenage pregnancies and teenage sexually transmitted disease diagnoses. A few state actions related to sex education In my home state, Alabama, the Centers for Disease Control and Prevention (CDC) conducted a survey and found that 50% of teenagers in the state have had sex, and nearly half of those did not use condoms. According to the Kansas City Star today, there is a bill being debated that will say that will present abstinence as the preferred choice for sexual activity. According to the Jacksonville Free Press, the state congress has fifteen bills before it about sex education. These programs are telling young people that any sex before marriage is evil. America's Attitude Toward Sex and Teens Is Insane.

Throughout the Bush years, funding for programs that refused to teach contraception in lieu of telling kids to wait until marriage--known as abstinence-only programs--ballooned, putting a lot of schools in a situation where the only real access to sex education funding they had was federal abstinence-only money. 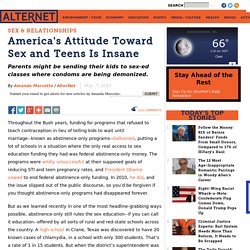 The programs were wildly unsuccessful at their supposed goals of reducing STI and teen pregnancy rates, and President Obama vowed to end federal abstinence-only funding. In 2010, he did, and the issue slipped out of the public discourse, so you’d be forgiven if you thought abstinence-only programs had disappeared forever. California judge bans abstinence-only teaching in teenage pregnancy 'hot spot' Ruling says sex education must be 'medically accurate and free of bias' in suit against Clovis Unified school district which has some of state's highest teen pregnancy and STD rates Anita Chabria in Sacramento Calling sex education an “important public right”, a California judge has created a potentially precedent-setting ruling that enforces state law barring abstinence-based teaching from schools. 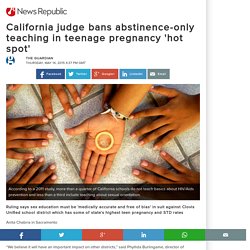 “We believe it will have an important impact on other districts,” said Phyllida Burlingame, director of reproductive justice policy for the Northern California American Civil Liberties Union (ACLU). “Having this ruling will be a very powerful tool.” In 2003, California passed a progressive sex education law that took an all-or-nothing approach to a controversial subject. California currently has a bill in the legislature, AB 329, which would make sex education mandatory and clarify standards. California has more than 1,000 school districts. Read the article on News Republic.