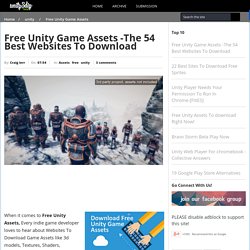 On various sites, you can buy your own assets like 3d models, package etc. Here we are giving you same amazing websites to download Free assets, Textures, Sounds, 3Dmodels and more, Some websites have both free and paid you just need to do advance search for free only. BurgZerg Arcade. Create a 2D Platform Game with Unity and the Dolby Audio API. In this tutorial, you'll learn how to create a mobile 2D game using C# and Unity. 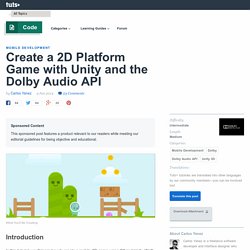 We'll be taking advantage of the Dolby Audio Plugin for Unity to enhance the game's audial experience. The objective of the game is simple, reaching the other side of the level while avoiding enemies and collecting coins. In this tutorial, you will learn the following aspects of Unity game development: setting up a 2D project in Unity creating Prefabs movement and action buttons working with physics collisions using a sprite sheetintegrating the Dolby Audio API Open Unity and select New Project from the File menu to open the new project dialog. In the next step, you're presented with Unity's user interface.

Since we're about to create a 2D game, the first thing we need to do after selecting the target platform is choosing the size of the artwork that we'll use in the game. Samsung Galaxy SIII: 720px x 1280px, 306 ppiAsus Nexus 7 Tablet: 800px x 1280px, 216 ppi Motorola Droid X: 854px x 480px, 228 ppi. Creating a Breakout Game for Beginners. Live Training Archive Beginner. 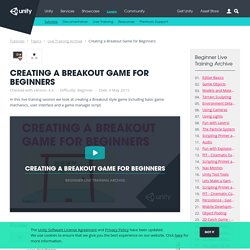 Unity 3d Tutorial #1 - 2d Brick Game. Unity: A complete 2d game tutorial (ClonyBird) SpeedTutor. This item has been hidden Optimising Games in Unity 5 Play all This series will go step by step using the most common and effective optimizing techniques in Unity 5! 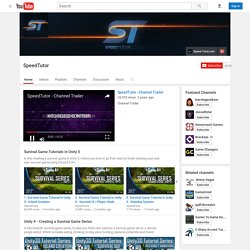 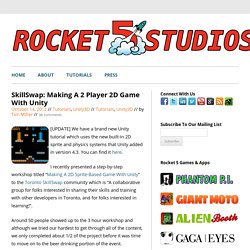 You can find it here. I recently presented a step-by-step workshop titled “Making A 2D Sprite-Based Game With Unity” to the Toronto SkillSwap community which is “A collaborative group for folks interested in sharing their skills and training with other developers in Toronto, and for folks interested in learning!”. Around 50 people showed up to the 3 hour workshop and although we tried our hardest to get through all of the content, we only completed about 1/2 of the project before it was time to move on to the beer drinking portion of the event. So while I still had all of the project steps fresh in my mind, I figured it would be a good idea to go through the workshop at home and screencast the whole thing so that everyone could get a chance to follow along with the complete tutorial. And here’s the screencast: Calculating Orthographic Camera Size. How to create an online multiplayer game with Unity - Paladin Studios. 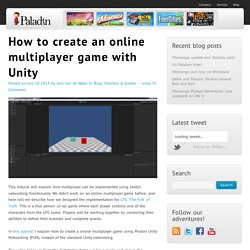 We didn’t work on an online multiplayer game before, and here will we describe how we designed the implementation for LFG: The Fork of Truth. This is a four person co-op game where each player controls one of the characters from the LFG comic. These are the things we are going to talk about: Creating a server So let’s get started! Unity 2D Game Tutorial - Part 1 Sprites and You. How To Make A Video Game [with Unity3D] Part 1. Devin Curry - Technical Artist. Making a Mecanim compatible rig in Blender. Home. S Unity 3d & Blender Programming Tutorials. This page is a repository for project files from the tutorials on my quill18creates YouTube channel. 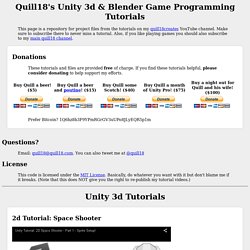 Introduction to building games with Unity. Crash Course - Learn Unity - Unity Cookie. The Crash Course is all about getting you up to speed quickly. 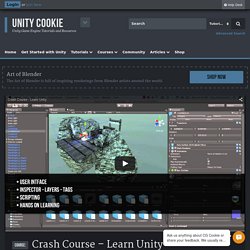 The goal is to give you a solid and basic foundation on what Unity is and how it works, providing you with the “big picture” or the full overview of working in Unity. Instead of walking you through hours of step-by-step tutorials, the Crash Course will quickly take you through the entire Unity workflow. Unity Tutorials by Infinite Ammo. Learn - Live Training Archive. So you want to be a Unity3D game developer? Unity3D has been making great strides of late, it’s has been one of the big go-to middleware engines for budding iOS and Android game developers and even expanded its reach to Web, Windows desktop and other platforms. 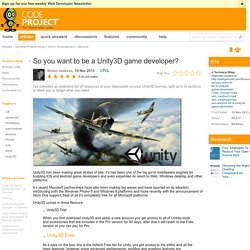 It’s recent Microsoft partnerships have also been making big waves and have spurred on its adoption, introducing both the Windows Phone 8 and Windows 8 platforms and more recently with the announcement of Xbox One support, best of all it’s completely free for all Microsoft platforms. Unity3D comes in three flavours: Unity3D TrialWhen you first download Unity3D and setup a new account you get access to all of Unities tools and accessories that are included in the Pro version for 30 days, after that it will revert to the Free version or you can pay for Pro.

Unity3D FreeAs it says on the box, this is the default Free tier for Unity, you get access to the editor and all the basic features, however some advanced performance, profiling and graphics features are disabled. Resources.