The Pagan's Path ~ Education Network. Atlastory: Mapping the history of the world. Certain ideas are “inevitable” over time. 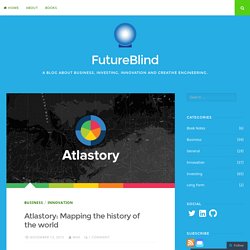 Paul Graham calls them “[squares] in the periodic table” — if they don’t exist now, they’ll be created shortly. It’s only a matter of when, not if. I believe that Atlastory is one of those ideas. The following is a long post about a project I’ve been passionate about for some time now and am currently in the process of winding down. The Idea Atlastory is an open source project to create an interactive map that chronicles the history of life on earth.

I started Atlastory at first because I’m a fan of both history and good data visualizations. Maps are one of the best ways to clearly show an enormous amount of information. To envision information—and what bright and splendid visions can result—is to work at the intersection of image, word, number, art.” — Edward Tufte Good design will be a key aspect of the final product. The Vision (version ∞) Imagine students in a classroom learning about World War II. Map content Base map Cultural cartography. Doing a Literature Review: Releasing the Social Science Research Imagination - Chris Hart. On First Looking into Chapman's Homer. On First Looking into Chapman's Homer Much have I travell'd in the realms of gold, And many goodly states and kingdoms seen; Round many western islands have I been Which bards in fealty to Apollo hold. 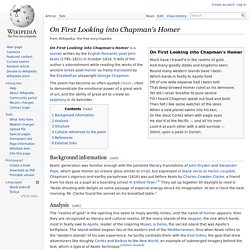 Oft of one wide expanse had I been told That deep-browed Homer ruled as his demesne; Yet did I never breathe its pure serene Till I heard Chapman speak out loud and bold: Then felt I like some watcher of the skies When a new planet swims into his ken; Or like stout Cortez when with eagle eyes He star'd at the Pacific — and all his men Look'd at each other with a wild surmise — Silent, upon a peak in Darien. On First Looking into Chapman's Homer is a sonnet written by the English Romantic poet John Keats (1795–1821) in October 1816. Magic of the Ancients: Five Incredible Texts of Spells, Curses, and Incantations. As long as humanity has had beliefs in a higher power, the use of magic, spells, curses, and incantations have featured widely across cultures. 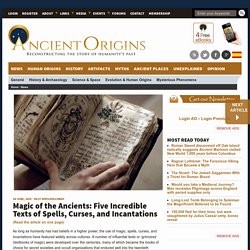 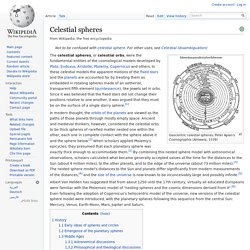 Fortuna. Fortuna (Latin: Fortūna, equivalent to the Greek goddess Tyche) was the goddess of fortune and personification of luck in Roman religion. 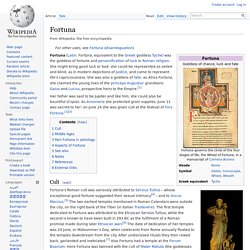 She might bring good luck or bad: she could be represented as veiled and blind, as in modern depictions of Justice, and came to represent life's capriciousness. She was also a goddess of fate: as Atrox Fortuna, she claimed the young lives of the princeps Augustus' grandsons Gaius and Lucius, prospective heirs to the Empire.[1] Her father was said to be Jupiter and like him, she could also be bountiful (Copia).

As Annonaria she protected grain supplies. June 11 was sacred to her: on June 24 she was given cult at the festival of Fors Fortuna.[2][3] Cult[edit] Fortuna. Boethius. Early life and rise to power[edit] 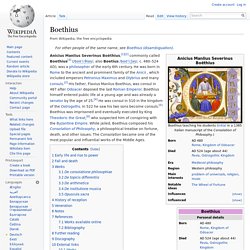 Theodicy. Gottfried Leibniz coined the term "theodicy" in an attempt to justify God's existence in light of the apparent imperfections of the world. 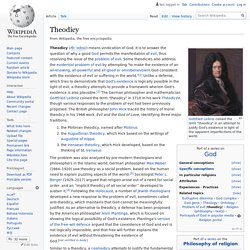 Theodicy (/θiːˈɒdɪsi/), in its most common form, is the attempt to answer the question of why a good God permits the manifestation of evil. Theodicy attempts to resolve the evidential problem of evil by reconciling the traditional divine characteristics of omnibenevolence, omnipotence, and omniscience, in either their absolute or relative form, with the occurrence of evil or suffering in the world.[1] Unlike a defence, which tries to demonstrate that God's existence is logically possible in the light of evil, a theodicy provides a framework which claims to make God's existence probable.

The term was coined in 1710 by German philosopher Gottfried Leibniz in his work, Théodicée, though various responses to the problem of evil had been previously proposed. Definition and etymology[edit] Reasons for theodicy[edit] Sociologist Peter L. Consolation of Philosophy. The Consolation of Philosophy (Latin: DE CONSOLATIONE PHILOSOPHIÆ) is a work by the sixth-century philosopher Boethius that has been described as having had the single most important influence on the Christianity of the Middle Ages and early Renaissance and as the last great work of the Classical Period.[1][2] Description[edit] A golden volume not unworthy of the leisure of Plato or Tully — Edward Gibbon[3] The Consolation of Philosophy was written during a one-year imprisonment Boethius served while awaiting trial – and eventual horrific execution – for the crime of treason under the Ostrogothic King Theodoric the Great. 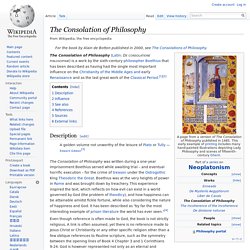 Boethius was at the very heights of power in Rome and was brought down by treachery. This experience inspired the text, which reflects on how evil can exist in a world governed by God (the problem of theodicy), and how happiness can be attainable amidst fickle fortune, while also considering the nature of happiness and God. Influence[edit] See also[edit]