Crontab. Digging into your Linux system's hardware. Ever find yourself having to look into the particulars of your servers' hardware? 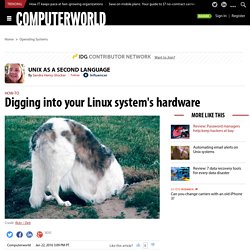 Maybe you go scrounging for the original invoice or for some email you were sent several years ago or the quote that was generated when you were about to purchase it? Well, stop. There's an alternative that you're probably going to like quite a bit. You can get your hardware to tell you about itself. Just use a command called dmidecode. The name "dmidecode" might not ring any bells, but the "dmi" part of the name stands for "Desktop Management Interface". The dmidecode command gets its data from the DMI tables stored in memory and presents it in a human readable format. . $ sudo dmidecode | grep Vendor Vendor: Dell Inc. $ sudo dmidecode -t system | grep Product Product Name: PowerEdge R710 These commands show that the system that Linux is running on is a Dell PowerEdge R710. . # dmidecode | wc -l 1046 Finding the serial number of the system:

Vala. Elementary OS. Design philosophy[edit] The Elementary OS project aims to solve a number of perceived deficiencies in the established desktop environments, namely: Although not contrary to the GNU philosophy,[4] these deliberate design choices diverge from what most GNU/Linux distributions opt for: a freedom to set up and customize one's own desktop environment. 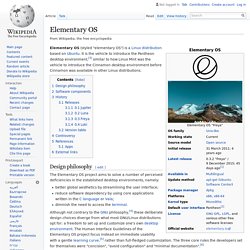 The Human Interface Guidelines of the Elementary OS project focus instead on immediate usability with a gentle learning curve,[5] rather than full-fledged customization. The three core rules the developers set for themselves were "concision", "avoid configuration" and "minimal documentation".[6] Since its inception, Elementary OS has received both praise and criticism for its design that closely resembles that of OS X — regarding both the visual design and the user experience.[7][8] Software components[edit] History[edit] Releases[edit] 0.1 Jupiter[edit] 0.2 Luna[edit] 0.3 Freya[edit] Elementary OS 0.3 "Freya" Which Linux distribution do you use most frequently?

Your Linux distribution of choice says a lot about you. 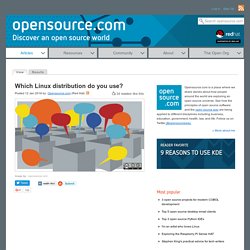 Of course, one of the many great things about Linux is the diversity of options you have to choose between. Maybe you like a slimmed down minimalist option. Maybe having all of the bells and whistles is important to you. How to Fix 502 Bad Gateway on Nginx. Many times we can browse the web and find a 502 bad gateway error at Nginx. 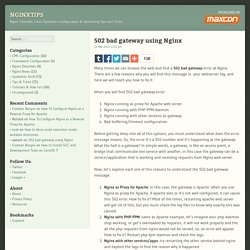 There are a few reasons why you will find this message in your webserver log, and here we will teach you how to fix it. When you will find 502 bad gateway error: Nginx running as proxy for Apache web server.Nginx running with PHP-FPM daemon.Nginx running with other services as gateway.Bad buffering/timeout configuration. Before getting deep into all of this options, you must understand what does the error message means. So, the error it’s a 502 number and it’s happening at the gateway. Now, let’s explore each one of this reasons to understand the 502 bad gateway message: Nginx as Proxy for Apache: in this case, the gateway is Apache. Other quick solutions: 1) Increase buffer and timeouts inside http block: 2) Ensure your php-fpm service is listening according to what you’ve configured in nginx, it can be either this two options: or After that, just restart the php-fpm service.

Nginx. Everything you need to know about the Shellshock Bash bug. Remember Heartbleed? 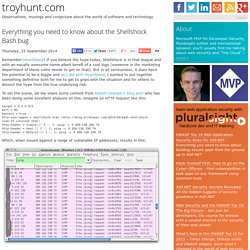 If you believe the hype today, Shellshock is in that league and with an equally awesome name albeit bereft of a cool logo (someone in the marketing department of these vulns needs to get on that). But in all seriousness, it does have the potential to be a biggie and as I did with Heartbleed, I wanted to put together something definitive both for me to get to grips with the situation and for others to dissect the hype from the true underlying risk. To set the scene, let me share some content from Robert Graham’s blog post who has been doing some excellent analysis on this.

Imagine an HTTP request like this: Which, when issued against a range of vulnerable IP addresses, results in this: Put succinctly, Robert has just orchestrated a bunch of external machines to ping him simply by issuing a carefully crafted request over the web. What is Bash and why do we need it? Bourne Shell Tutorial. Last Updated: Wed Jun 5 22:28:58 EDT 2013 Check out my other tutorials on the Unix Page, and my blog Thanks to suggestions/correectons from: Ryan Penn Helmut Neujahr DJ Phasik Dustin King Table of Contents Copyright 1994, 1995 Bruce Barnett and General Electric Company Copyright 2001, 2005, 2013 Bruce Barnett All rights reserved You are allowed to print copies of this tutorial for your personal use, and link to this page, but you are not allowed to make electronic copies, or redistribute this tutorial in any form without permission. 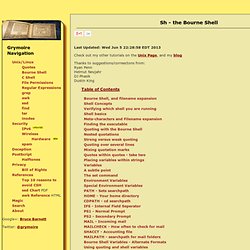 Original version written in 1994 and published in the Sun Observer How to build your own complex commands from the simple commands in the UNIX toolbox. Bourne Shell, and filename expansion This sections covers the Bourne shell. The Bourne shell is considered the primary shell in scripts. Shell Concepts What is a shell, anyway?