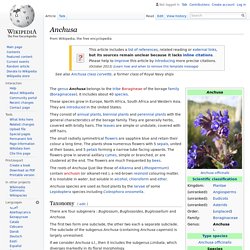 They are introduced in the United States. They consist of annual plants, biennial plants and perennial plants with the general characteristics of the borage family. They are generally herbs, covered with bristly hairs. The leaves are simple or undulate, covered with stiff hairs. Charms, Cures, Herbal Remedies from Ancestors of Granny Women. Irish ancestors ~ Charms, cures, herbal healing practices and beliefs from ancestors of a Granny Woman goes far back in time. 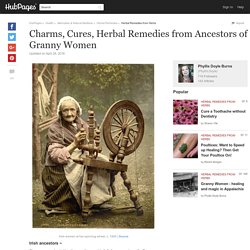 The healers of Appalachia know their knowledge and wisdom has been passed down for generations in their family. Quercus coccifera. Description[edit] Quercus coccifera is usually a shrub less 2 metres (6.6 ft) tall, rarely a small tree, reaching 1–6 metres (3.3–19.7 ft) tall (a 10 metres (33 ft) specimen recorded in Kouf, Libya[4]) and 50 cm trunk diameter. 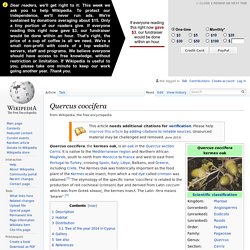 It is evergreen, with spiny-serrated coriaceous leaves 1.5–4 cm long and 1–3 cm broad. The acorns are 2–3 cm long and 1.5–2 cm diameter when mature about 18 months after pollination. Aronia. Chokeberries are cultivated as ornamental plants and as food products. 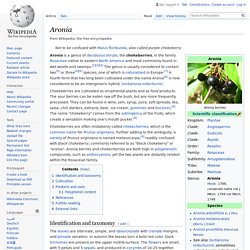 The sour berries can be eaten raw off the bush, but are more frequently processed. Amaranth. "Doodo" redirects here. 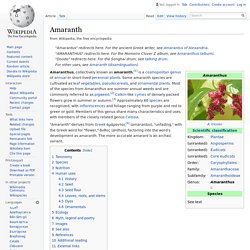 For the Songhai drum, see talking drum. "Amaranth" derives from Greek ἀμάραντος[4] (amárantos), "unfading," with the Greek word for "flower," ἄνθος (ánthos), factoring into the word's development as amaranth. The more accurate amarant is an archaic variant. Taxonomy[edit] Traditional Mexican candy made with amaranth Formerly, Sauer (1955) classified the genus into two subgenera, differentiating only between monoecious and dioecious species: Acnida (L.) Physostigma venenosum. Physostigma venenosum (the Calabar bean or ordeal bean) is the seed of a leguminous plant, a native of tropical Africa, poisonous to humans. 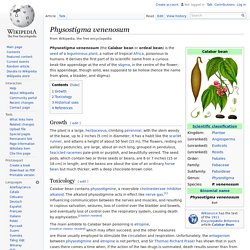 It derives the first part of its scientific name from a curious beak-like appendage at the end of the stigma, in the centre of the flower; this appendage, though solid, was supposed to be hollow (hence the name from φῦσα, a bladder, and stigma). Growth[edit] Triadica sebifera. Triadica sebifera, also known as Sapium sebiferum, is commonly known as the Chinese tallow tree, Florida aspen, chicken tree, gray popcorn tree,[1] and candleberry tree.[2] The tree is native to eastern Asia, and is most commonly associated with eastern China, Taiwan, and Japan. 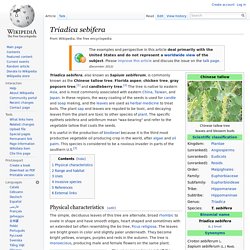 In these regions, the waxy coating of the seeds is used for candle and soap making, and the leaves are used as herbal medicine to treat boils. The plant sap and leaves are reputed to be toxic, and decaying leaves from the plant are toxic to other species of plant. The specific epithets sebifera and sebiferum mean "wax-bearing" and refer to the vegetable tallow that coats the seeds.

It is useful in the production of biodiesel because it is the third most productive vegetable oil producing crop in the world, after algae and oil palm. This species is considered to be a noxious invader in parts of the southern U.S.[3] Physical characteristics[edit] Leptospermum - family Myrtaceae - Australian Plant Information. Tea tree. Leptospermum scoparium. Manuka (Leptospermum scoparium) essential oil in a clear glass vial §Description[edit] It is a prolific scrub-type tree and is often one of the first species to regenerate on cleared land. 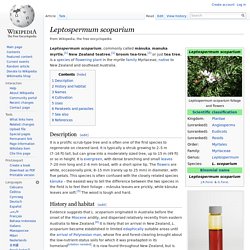 It is typically a shrub growing to 2–5 m (7–16 ft) tall, but can grow into a moderately sized tree, up to 15 m (49 ft) or so in height. 'Suicide tree' toxin is 'perfect' murder weapon - 26 November 2004. A plant dubbed the suicide tree kills many more people in Indian communities than was previously thought. 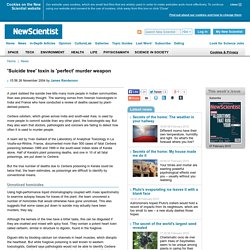 The warning comes from forensic toxicologists in India and France who have conducted a review of deaths caused by plant-derived poisons. Cerbera odollam, which grows across India and south-east Asia, is used by more people to commit suicide than any other plant, the toxicologists say. But they also warn that doctors, pathologists and coroners are failing to detect how often it is used to murder people. A team led by Yvan Gaillard of the Laboratory of Analytical Toxicology in La Voulte-sur-Rhône, France, documented more than 500 cases of fatal Cerbera poisoning between 1989 and 1999 in the south-west Indian state of Kerala alone. Cerbera odollam. Cerbera odollam, commonly known as the Suicide tree, Pong-pong, and Othalanga, is a species of tree native to India and other parts of Southern Asia. 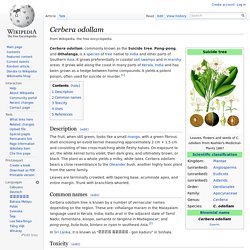 It grows preferentially in coastal salt swamps and in marshy areas. It grows wild along the coast in many parts of Kerala, India and has been grown as a hedge between home compounds. It yields a potent poison, often used for suicide or murder.[1] Description[edit] The fruit, when still green, looks like a small mango, with a green fibrous shell enclosing an ovoid kernel measuring approximately 2 cm × 1.5 cm and consisting of two cross-matching white fleshy halves.

It uses an advanced communications system to respond to immediate threats. [2] The complex efficiency of your immune system and how it works non-stop indeed signify its importance for your health. If the immune system weakens and malfunctions, imagine the host of diseases that can invade your system. Burdock - Build your blood, bones and nervous system.