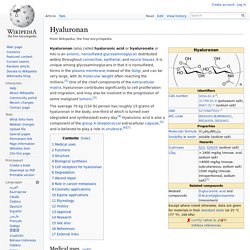 It is unique among glycosaminoglycans in that it is nonsulfated, forms in the plasma membrane instead of the Golgi, and can be very large, with its molecular weight often reaching the millions.[2] One of the chief components of the extracellular matrix, hyaluronan contributes significantly to cell proliferation and migration, and may also be involved in the progression of some malignant tumors.[3] Medical uses[edit] Neuroflexyn - focus, memory and concentration formula - neuroflexyn.com. * These statements have not been evaluated by the FDA. 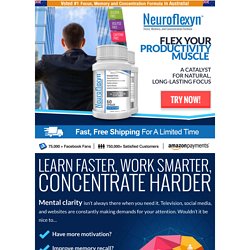 This product is not intended to diagnose, treat, cure or prevent any disease. If you are pregnant, nursing, or taking medication we suggest consulting with a physician before using any of our products. Phosphatidylcholine. Phosphatidylcholines (PC) are a class of phospholipids that incorporate choline as a headgroup. 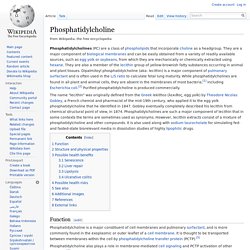 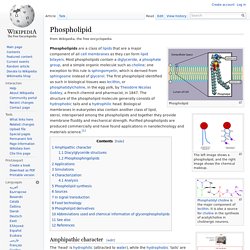 Phospholipids are a class of lipids that are a major component of all cell membranes as they can form lipid bilayers. Most phospholipids contain a diglyceride, a phosphate group, and a simple organic molecule such as choline; one exception to this rule is sphingomyelin, which is derived from sphingosine instead of glycerol. The first phospholipid identified as such in biological tissues was lecithin, or phosphatidylcholine, in the egg yolk, by Theodore Nicolas Gobley, a French chemist and pharmacist, in 1847. The structure of the phospholipid molecule generally consists of hydrophobic tails and a hydrophilic head. Biological membranes in eukaryotes also contain another class of lipid, sterol, interspersed among the phospholipids and together they provide membrane fluidity and mechanical strength.

Amphipathic character[edit] Diacylglyceride structures[edit] Choline. Choline is a water-soluble essential nutrient.[1][2][3][4][5] It is usually grouped within the B-complex vitamins. 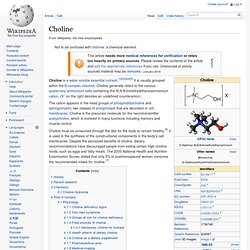 Choline generally refers to the various quaternary ammonium salts containing the N,N,N-trimethylethanolammonium cation. (X− on the right denotes an undefined counteranion). The cation appears in the head groups of phosphatidylcholine and sphingomyelin, two classes of phospholipid that are abundant in cell membranes. Choline is the precursor molecule for the neurotransmitter acetylcholine, which is involved in many functions including memory and muscle control. Choline must be consumed through the diet for the body to remain healthy.[6] It is used in the synthesis of the constructional components in the body's cell membranes. History[edit] Sarcoidosis. Sarcoidosis, also called sarcoid, is a disease involving abnormal collections of inflammatory cells (granulomas) that can form as nodules in multiple organs.[1] The granulomas are most often located in the lungs or its associated lymph nodes, but any organ can be affected.[2] Sarcoidosis seems to be caused by an immune reaction to an infection or some other trigger (called an antigen) that continues even after the initial infection or other antigen is cleared from the body.[3] In most cases it clears up by itself without any medical intervention, but some cases go on to affect the person long-term or become life-threatening and require medical intervention, most often with medications.[2] 1 alpha, 25(OH)2 Vitamin D3 is the main cause for high blood calcium in sarcoidosis and is overproduced by sarcoid granulomata. 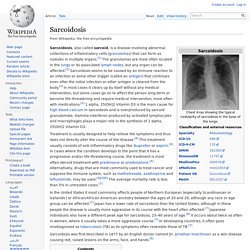 Gamma-interferon produced by activated lymphocytes and macrophages plays a major role in the synthesis of 1 alpha, 25(OH)2 Vitamin D3. Signs and symptoms[edit] Skin[edit] Infographic: What does the colour of your snot say about your health? Mucus alone isn't enough to diagnose disease, but it can give doctors useful insights into what's happening inside your body. 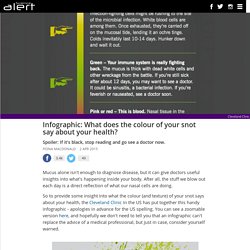 After all, the stuff we blow out each day is a direct reflection of what our nasal cells are doing. So to provide some insight into what the colour (and texture) of your snot says about your health, the Cleveland Clinic in the US has put together this handy infographic - apologies in advance for the US spelling. You can see a zoomable version here, and hopefully we don't need to tell you that an infographic can't replace the advice of a medical professional, but just in case, consider yourself warned.

Source: Cleveland Clinic. Kinesiology. A series of images that represent research (left) and practice (right) in the field of kinesiology. 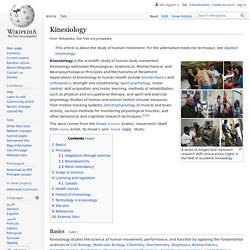 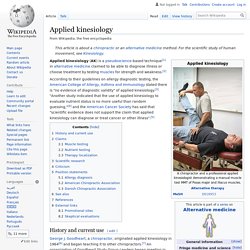 According to their guidelines on allergy diagnostic testing, the American College of Allergy, Asthma and Immunology stated there is “no evidence of diagnostic validity” of applied kinesiology,[2] and another study has shown that as an evaluative method, AK "is no more useful than random guessing",[3] and the American Cancer Society has said that "scientific evidence does not support the claim that applied kinesiology can diagnose or treat cancer or other illness".

Applied kinesiology, as described above, should not be confused with kinesiology, which is the scientific study of human movement. History and current use[edit] George J. Claims[edit] Scientific research[edit] Use your age as an excuse – I dare you. Ideomotor phenomenon. Purple carrots. Anthramycin. Chemical structure[edit] The chemical structure of anthramycin was first elucidated by Leimgruber using nuclear magnetic resonance and ultraviolet spectroscopy. 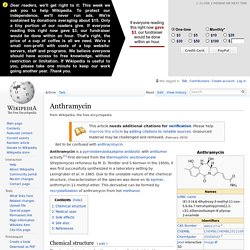 Using another similarly structured fermentation product simply referred to as 'yellow pigment' as a basis of comparison, he was able to identify all major functional groups of the structure. The structure of the species was narrowed down to one of two possible candidates: one with a pyrrolobenzodiazepine nucleus, and another with a pyridoquinazoline skeleton. The first structure was confirmed through the use of mass spectrometry. Medical uses[edit] Anthramycin is an active anti-tumor agent and antibiotic.

Side effects[edit] Hypernatremia - Endocrine and Metabolic Disorders - MSD Manual Professional Edition. FreeStyle Blood Glucose Meters. Ketones are a chemical produced by your body when, due to a lack of insulin, it is not able to use glucose as its source of energy, and instead start breaking down fat. ••••• What are ketones? The body produces ketones by breaking down fat when blood glucose drops. Histidine. Histidine (abbreviated as His or H; encoded by the codons CAU and CAC) is an ɑ-amino acid that is used in the biosynthesis of proteins. It contains an α-amino group (which is in the protonated –+NH3 form under biological conditions), a carboxylic acid group (which is in the deprotonated –COO- form under biological conditions), and a side chain imidazole, classifying it as a positively charged (at physiological pH), aromatic amino acid.

Initially thought essential only for infants, longer-term studies shown it is essential for adults also.[2] Histidine was first isolated by German physician Albrecht Kossel and Sven Hedin in 1896.[3] It is also a precursor to histamine, a vital inflammatory agent in immune responses. Chemical properties[edit] The conjugate acid (protonated form) of the imidazole side chain in histidine has a pKa of approximately 6.0.

Aromaticity[edit] Aronia. Chokeberries are cultivated as ornamental plants and as food products. Anthocyanin. Not to be confused with anthocyanidins, the sugar-free counterparts of anthocyanins. Anthocyanins give these pansies their dark purple pigmentation. Anthocyanins (also anthocyans; from Greek: ἀνθός (anthos) = flower + κυανός (kyanos) = blue) are water-soluble vacuolar pigments that may appear red, purple, or blue depending on the pH. They belong to a parent class of molecules called flavonoids synthesized via the phenylpropanoid pathway; they are odorless and nearly flavorless, contributing to taste as a moderately astringent sensation.

Anthocyanins occur in all tissues of higher plants, including leaves, stems, roots, flowers, and fruits. Insulin. Not to be confused with Inulin. Insulin (from the Latin, insula meaning island) is a peptide hormone produced by beta cells in the pancreas, and by Brockmann body in some teleost fish.[2] It regulates the metabolism of carbohydrates and fats by promoting the absorption of glucose from the blood to skeletal muscles and fat tissue and by causing fat to be stored rather than used for energy.

Insulin also inhibits the production of glucose by the liver.[3] Except in the presence of the metabolic disorder diabetes mellitus and metabolic syndrome, insulin is provided within the body in a constant proportion to remove excess glucose from the blood, which otherwise would be toxic. When blood glucose levels fall below a certain level, the body begins to use stored glucose as an energy source through glycogenolysis, which breaks down the glycogen stored in the liver and muscles into glucose, which can then be utilized as an energy source.

Truth Tobacco Industry Documents. Insulin. Losing just 1 gram of fat in the pancreas can reverse type 2 diabetes. Losing a single gram of fat could be enough to reverse the symptoms of type 2 diabetes – as long as that fat comes from the pancreas, researchers in the UK have shown. It's already known that weight loss can greatly help manage type 2 diabetes – a progressive condition where the body either stops being able to produce enough insulin, or becomes insensitive to it – but this is the first time that researchers have shown the exact type of weight loss that's needed to get the condition under control.

The study followed 18 obese participants with type 2 diabetes both before and after gastric bypass surgery.