Star Trek&#039;s warp drive might become a reality. How our dream of exploring the stars might actually someday come true. 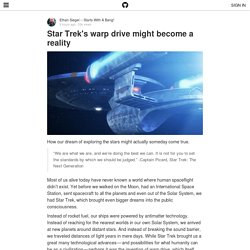 “We are what we are, and we’re doing the best we can. It is not for you to set the standards by which we should be judged.” -Captain Picard, Star Trek: The Next Generation Most of us alive today have never known a world where human spaceflight didn’t exist. Yet before we walked on the Moon, had an International Space Station, sent spacecraft to all the planets and even out of the Solar System, we had Star Trek, which brought even bigger dreams into the public consciousness. Instead of rocket fuel, our ships were powered by antimatter technology.

Powered by antimatter technology, a warp drive rocket would not only get arbitrarily close to the speed of light, but could exceed it many times over thanks to bending the fabric of space itself. Since even before the inception of Star Trek, the need to defeat the speed of light seems to be a necessity for human space exploration. This post first appeared at Forbes. Alcubierre drive. Two-dimensional visualization of the Alcubierre drive, showing the opposing regions of expanding and contracting spacetime that displace the central region. 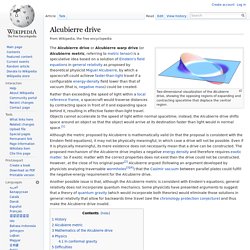 The Alcubierre drive or Alcubierre warp drive (or Alcubierre metric, referring to metric tensor) is a speculative idea based on a solution of Einstein's field equations in general relativity as proposed by theoretical physicist Miguel Alcubierre, by which a spacecraft could achieve faster-than-light travel if a configurable energy-density field lower than that of vacuum (that is, negative mass) could be created. Rather than exceeding the speed of light within a local reference frame, a spacecraft would traverse distances by contracting space in front of it and expanding space behind it, resulting in effective faster-than-light travel.

Another possible issue is that, although the Alcubierre metric is consistent with Einstein's equations, general relativity does not incorporate quantum mechanics. History[edit] Einstein field equations. Miguel Alcubierre. Miguel Alcubierre Moya (born March 28, 1964 in Mexico City) is a Mexican theoretical physicist.[1] Alcubierre is known for the proposed Alcubierre drive, a speculative warp drive by which a spacecraft could achieve faster-than-light travel. 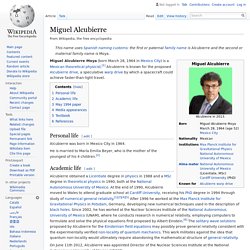 Personal life[edit] Alcubierre was born in Mexico City in 1964. He is married to María Emilia Beyer, who is the mother of the youngest of his 4 children.[2] Academic life[edit] Alcubierre obtained a Licentiate degree in physics in 1988 and a MSc degree in theoretical physics in 1990, both at the National Autonomous University of Mexico. On June 11th 2012, Alcubierre was appointed Director of the Nuclear Sciences Institute at the National Autonomous University of Mexico (UNAM). Faster-than-light. Faster-than-light (also superluminal or FTL) communication and travel refer to the propagation of information or matter faster than the speed of light. 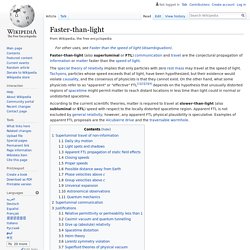 Under the special theory of relativity, a particle (that has rest mass) with subluminal velocity needs infinite energy to accelerate to the speed of light, although special relativity does not forbid the existence of particles that travel faster than light at all times (tachyons). On the other hand, what some physicists refer to as "apparent" or "effective" FTL[1][2][3][4] depends on the hypothesis that unusually distorted regions of spacetime might permit matter to reach distant locations in less time than light could in normal or undistorted spacetime. Although according to current theories matter is still required to travel subluminally with respect to the locally distorted spacetime region, apparent FTL is not excluded by general relativity.

FTL travel of non-information[edit] Daily sky motion[edit] Light spots and shadows[edit] Dr. Negative mass. In theoretical physics, negative mass is a hypothetical concept of matter whose mass is of opposite sign to the mass of normal matter, e.g. −2 kg. 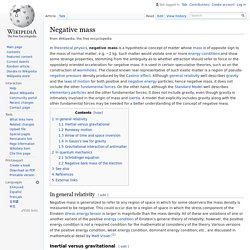 Such matter would violate one or more energy conditions and show some strange properties, stemming from the ambiguity as to whether attraction should refer to force or the oppositely oriented acceleration for negative mass. It is used in certain speculative theories, such as on the construction of wormholes. The closest known real representative of such exotic matter is a region of pseudo-negative pressure density produced by the Casimir effect. Although general relativity well describes gravity and the laws of motion for both positive and negative energy particles, hence negative mass, it does not include the other fundamental forces. Numerical relativity. Numerical relativity is one of the branches of general relativity that uses numerical methods and algorithms to solve and analyze problems. 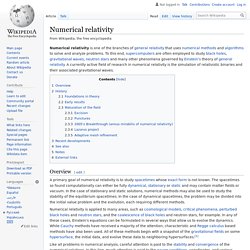 To this end, supercomputers are often employed to study black holes, gravitational waves, neutron stars and many other phenomena governed by Einstein's Theory of General Relativity. A currently active field of research in numerical relativity is the simulation of relativistic binaries and their associated gravitational waves. Other branches are also active.

Overview[edit] A primary goal of numerical relativity is to study spacetimes whose exact form is not known. Like all problems in numerical analysis, careful attention is paid to the stability and convergence of the numerical solutions. Numerical relativity research is distinct from work on classical field theories as many techniques implemented in these areas are inapplicable in relativity.