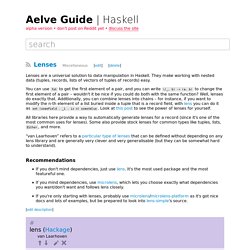 Lens Tutorial - Introduction (part 1) - Jakub Arnold Blog. This article is the first in the upcoming series that aims to explain the Haskell’s lens library and the ideas behind it in an approachable way. 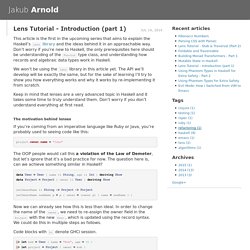 Don’t worry if you’re new to Haskell, the only prerequisites here should be understanding of the Functor type class, and understanding how records and algebraic data types work in Haskell. We won’t be using the lens library in this article yet. The API we’ll develop will be exactly the same, but for the sake of learning I’ll try to show you how everything works and why it works by re-implementing it from scratch. Keep in mind that lenses are a very advanced topic in Haskell and it takes some time to truly understand them. Don’t worry if you don’t understand everything at first read. The motivation behind lenses If you’re coming from an imperative language like Ruby or Java, you’re probably used to seeing code like this: Lens is unidiomatic Haskell. April 24, 2014 Edward Kmett writes: Ironically if I had to say anything from the traffic in my inbox and on #haskell about it, it is mostly the old guard who gets disgruntled by lens. 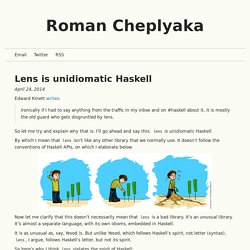 Lens over tea #1: lenses 101, traversals 101, and some implementation details. Okay, so I never could really understand how lens works. 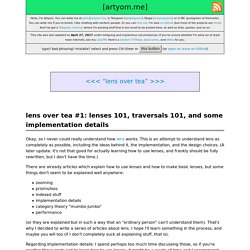 This is an attempt to understand lens as completely as possible, including the ideas behind it, the implementation, and the design choices. (A later update: it's not that good for actually learning how to use lenses, and frankly should be fully rewritten, but I don't have the time.) There are already articles which explain how to use lenses and how to make basic lenses, but some things don't seem to be explained well anywhere: zoomingprisms/isosindexed stuffimplementation detailscategory theory “mumbo-jumbo”performance (or they are explained but in such a way that an “ordinary person” can't understand them). Regarding implementation details: I spend perhaps too much time discussing those, so if you're reading these posts just to learn how to use lenses, it might be a waste of time and I recommend you to look for another tutorial.

Disclaimer #1: you might need more than 1 cup. Program imperatively using Haskell lenses. Haskell gets a lot of flack because it has no built-in support for state and mutation. 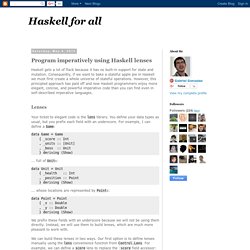 Consequently, if we want to bake a stateful apple pie in Haskell we must first create a whole universe of stateful operations. However, this principled approach has paid off and now Haskell programmers enjoy more elegant, concise, and powerful imperative code than you can find even in self-described imperative languages. Lenses Your ticket to elegant code is the lens library. You define your data types as usual, but you prefix each field with an underscore. ... full of Units: ... whose locations are represented by Points: We prefix these fields with an underscore because we will not be using them directly. We can build these lenses in two ways. Import Control.Lens score :: Lens' Game Int score = lens _score (\game v -> game { _score = v })

Lenses and JSON are best friends in Haskell – Spoke Proof. At Trello we’ve been playing with lenses, from the world of modern functional programming. 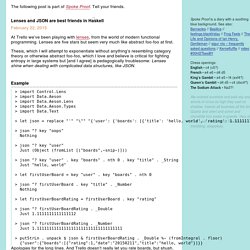 Lenses are five stars but seem very much like abstract foo-foo at first. Thesis, which I will attempt to exponentiate without anything’s resembling category theory or otherwise abstract foo-foo, which I love and believe is critical for fighting entropy in large systems but [and I agree] is pedagogically troublesome: Lenses shine when dealing with complicated data structures, like JSON. Example Apologies for the long lines. And Trello doesn’t really let you rate boards, but shush. Unpacking the example We use JSON all the time! Error handling. The way I think about lenses is as pipelines, rushing data forwards (pulling a smaller structure out of a larger one) and backwards (updating a smaller structure inside a larger one, and being able to wrap everything back up), connected at the joints by our function composition operator ..

Intolerable. A Little Lens Starter Tutorial - School of Haskell. Lens is a package which provides the type synonym Lens which is one of a few implementations of the concept of lenses, or functional references. lens also provides a number of generalizations of lenses including Prisms, Traversals, Isos, and Folds. 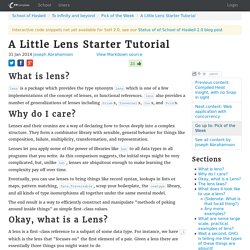 Lenses and their cousins are a way of declaring how to focus deeply into a complex structure. They form a combinator library with sensible, general behavior for things like composition, failure, multiplicity, transformation, and representation. Lenses let you apply some of the power of libraries like hxt to all data types in all programs that you write. As this comparison suggests, the initial steps might be very complicated, but, unlike hxt, lenses are ubiquitous enough to make learning the complexity pay off over time. The end result is a way to efficiently construct and manipulate "methods of poking around inside things" as simple first-class values.

A lens is a first-class reference to a subpart of some data type.