Sankey - Highlight all connected paths from start to end. Glad you got it working Ashish. 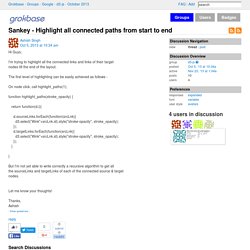 I liked Shreeram's idea of tagging related links and I implementedlink-through highlighting. The end result is over here. I attached a linkid to each related link as I added them from the data: relation.linkid = "L" + i; Added the attribute to the graph links: Then on mouseover and mouseout: DexCharts : Sankey Update. I am taking a small break from the series on small multiples to release an updated version of DexCharts. 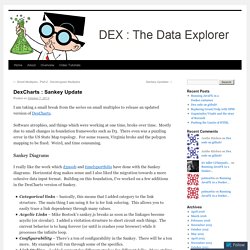 Software atrophies, and things which were working at one time, broke over time. Mostly due to small changes in foundation frameworks such as D3. There even was a puzzling error in the US State Map topology. For some reason, Virginia broke and the polygon mapping to be fixed. Weird, and time consuming. Sankey Diagrams I really like the work which d3noob and timelyportfolio have done with the Sankey diagrams.

Categorical links – basically, this means that I added category to the link structure. Lets look at a few examples: Example 1. Gradient along links in D3 Sankey diagram. D3 Sankey Chord Colors. Marco Andolfi's Blog: Sankey Diagram with D3JS. I received a task recently which gave me a lot of fun. 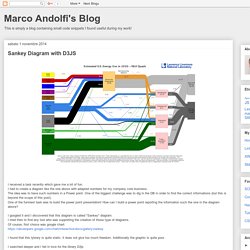 I had to create a diagram like the one above with adapted numbers for my company core business. The idea was to have such numbers in a Power point. One of the biggest challenge was to dig in the DB in order to find the correct informations (but this is beyond the scope of this post). One of the funniest task was to build the power point presentation! How can I build a power point reporting the information such the one in the diagram above? Who Said What - d3 Sankey Chart tutorial using twitter data. In this d3.js tutorial we are going to show how to visualize twitter hashtags data using a Sankey chart. 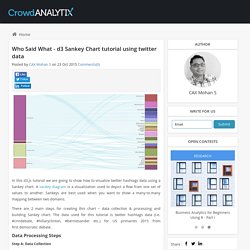 A sankey diagram is a visualization used to depict a flow from one set of values to another. Sankeys are best used when you want to show a many-to-many mapping between two domains. There are 2 main steps for creating this chart – data collection & processing and building Sankey chart. The data used for this tutorial is twitter hashtags data (i.e. #cnndebate, #hillaryclinton, #berniesander etc.) for US primaries 2015 from first democratic debate. Sankey diagram with horizontal and vertical node movement - bl.ocks.org. Sankey Diagram. Source: Department of Energy & Climate Change, Tom Counsell. 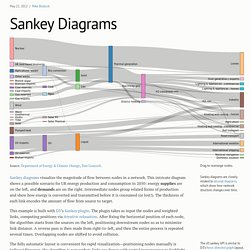 Sankey diagrams visualize the magnitude of flow between nodes in a network. This intricate diagram shows a possible scenario for UK energy production and consumption in 2050: energy supplies are on the left, and demands are on the right. Intermediate nodes group related forms of production and show how energy is converted and transmitted before it is consumed (or lost!). The thickness of each link encodes the amount of flow from source to target. This example is built with D3’s Sankey plugin. The fully automatic layout is convenient for rapid visualization—positioning nodes manually is tedious! Railroad Diagram Generator.

Treevis.net. MyChemistrymyChemistry. Object-Role Modeling. Not to be confused with Object-relational mapping. example of an ORM2 diagram Object-role modeling (ORM) is used to model the semantics of a universe of discourse. 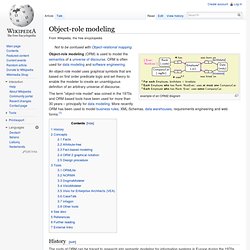 ORM is often used for data modeling and software engineering. An object-role model uses graphical symbols that are based on first order predicate logic and set theory to enable the modeler to create an unambiguous definition of an arbitrary universe of discourse. The term "object-role model" was coined in the 1970s and ORM based tools have been used for more than 30 years – principally for data modeling. History[edit] The roots of ORM can be traced to research into semantic modeling for information systems in Europe during the 1970s. Reviews for GLE - Graphics Layout Engine. 22 Useful Free Tools For Creating Charts, Diagrams and Flowcharts. In this round up, we are presenting a very helpful compilation of some free online tools that will help you create charts, diagrams and flowcharts. 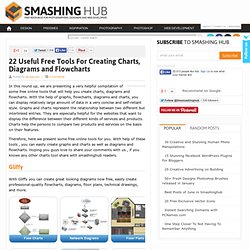 With the help of graphs, flowcharts, diagrams and charts, you can display relatively large amount of data in a very concise and self-reliant style. Graphs and charts represent the relationship between two different but interlinked entries. They are especially helpful for the websites that want to display the difference between their different kinds of services and products. Charts help the persons to compare two products and services on the basis on their features. Therefore, here we present some free online tools for you. 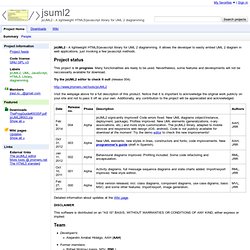 It allows the developer to easily embed UML 2 diagram in web applications, just invoking a few javascript methods. Project status This project is in progress. Many functionalities are ready to be used. Nevertheless, some features and developments will not be neccessarily available for download. Try the jsUML2 editor to check it out! Visit the webpage above for a full description of this product. Detailed information about updates at the Wiki page. This software is distributed on an "AS IS" BASIS, WITHOUT WARRANTIES OR CONDITIONS OF ANY KIND, either express or implied. Team Improvements in progress. HTML5 Canvas Tutorial With Examples. The canvas concept was originally introduced by Apple to be used in Mac OS X WebKit to create dashboard widgets. 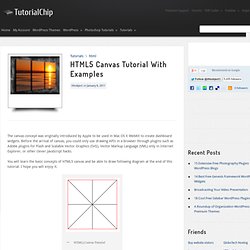 Before the arrival of canvas, you could only use drawing APIs in a browser through plugins such as Adobe plugins for Flash and Scalable Vector Graphics (SVG), Vector Markup Language (VML) only in Internet Explorer, or other clever JavaScript hacks. You will learn the basic concepts of HTML5 canvas and be able to draw following diagram at the end of this tutorial. Simfo. Raphaël—JavaScript Library. Layout and graph algorithms. Graph Computation, Layout, Algorithms for JavaScript. Jquery - Graph visualization code in javascript.