User Guide. 3D Models and 3D Software by Daz 3D. Poses from DAZ to Blender. The biggest gap in the DAZ Studio to Blender workflow for some time has been that it's very hard to bring poses and animations over. 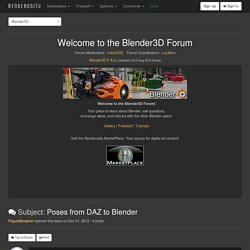 Blender doesn't support the FBX format for licensing reasons and none of the third party FBX importers are ready for prime time, the .obj format doesn't support armatures at all and, for some reason, and none of the other export options can be imported by Blender except Collada. In the past, my Collada exports that included animations wouldn't open, or would open without the pose/animation data. That left you with having to use the very buggy BVH exporter in DAZ Studio and then mapping the two armatures with bone contraints, which was time consuming and a pain and not worth the time - easier just to recreate the pose in Blender. 3D Celebrity Look-alikes for DAZ Studio & Poser. 3D Celebrity Look-alikes for DAZ Studio & Poser Previous 1 2 3 … 28 Next Chloe Grace Moretz - Sabrina Blinker V4-Elite-S4 SOTO's Vincent for The Freak 4 - Ron Perlman's Vincent. 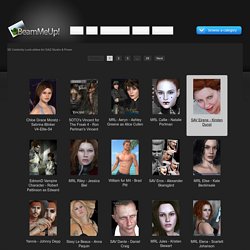 Creating Clothing Against a Genesis Morph Shape (WIP) [Documentation Center] This page is a WIP. 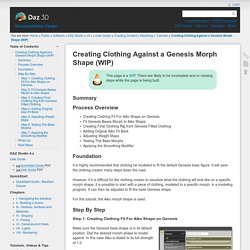 There are likely to be incomplete and or missing steps while the page is being built. Summary. Tutorial: Converting Textures from Gen2 to Gen3 - Daz 3D Forums. As discussed in this thread. 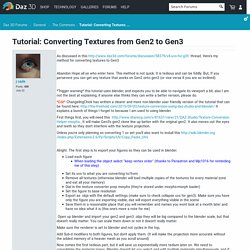 Here's my method for converting textures to Gen3 Abandon Hope all ye who enter here. This method is not quick. It is tedious and can be fiddly. But, If you persevere you can get any texture that works on Gen2 onto gen3 (or vice versa if you are so inclined) *Trigger warning* this tutorial uses blender, and expects you to be able to navigate its viewport a bit, also I am not the best at explaining, if anyone else thinks they can write a better version, please do. Texture Conversion Using Daz Studio and Blender. Texture Conversion Helper morphs - DAZ Studio.

Adding MetaData in DAZ Studio 4 6. McjTeleBlender DS1,2,3,4 - mCasual's Daz Scripts. November 3rd 2013 Fixed mcjBlendBotForCarrara which was unable to invoke addCamera from the mcjBlendBot moduleSeptember 10th 2013 the mcjUseMatLib.py Blender python module was corrected - if the use-mat-lib option is in effect, but the material-library doesn't contain a given material, a cycles node tree is built anyway - this is not a perfect patch since it breaks compatibility with non-cycles renders April 7th 2013 11:42 am Blender Version 2.66.3 and up uses different node names, this effectively prevents proper loading of the scene please download the package named mcjBlendBotForBlender2663AndUp.zip found in the attachments install it in the scripts/modules folder of your Blender 2.66.3 and up February 17th 2013 fixes : the materials were not smoothed when rendering animations, fixes : DS1,DS2 materials didnt get the gloss factor when exporting animations in the download section, there was a confusion between mcjTeleBlender.zip and mcjTeleblender.zip feb. 20 2010 release Introduction Credits. 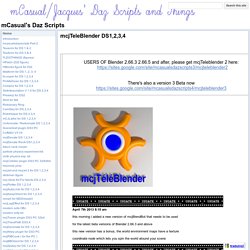 Must be Tuesday » Import a DAZ pose to Blender. If like me you enjoy using DAZ3D for its characters, its morphs and to pose characters, but if you like using Blender better to finish the pose and render work, you may have some trouble to find a suitable workflow between DAZ and Blender. 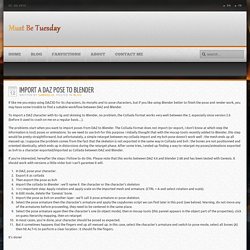 To import a DAZ character with its rig and skinning to Blender, no problem, the Collada format works very well between the 2, especially since version 2.6 (before it used to crash on me on a regular basis…). The problems start when you want to import poses from DAZ to Blender. The Collada format does not import (or export, I don’t know at which step the information is lost) poses or animations.

How to transfer rigging without being in zero position? - DAZ Forums. Transferring Morphs from Genesis to G2M/G2F and from G2M/G2F to Genesis (Now with Clones!). Works on - DAZ Forums. As currently I have no desire to buy G2F Morphs and with Genesis 2 offering such small functionality, comparatively to my morph collection of two years, I started to wonder if I can transfer Genesis morphs to Genesis 2 Female in order to give her some morphability. 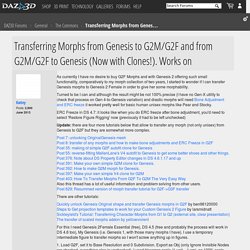 Turned to be I can and although the result might be not 100% precise (I have no Gen-X utility to check that process on Gen 4-to-Genesis variation) and drastic morphs will need Bone Adjustment and ERC freeze it worked pretty well for basic human unisex morphs like Pear and Stocky. ERC Freeze in DS 4.7: it looks like when you do ERC freeze after bone adjustment, you'd need to select 'Restore Figure Rigging' now (previously it had to be left unchecked) Update: there are four more tutorials below that allow to transfer any morph (not only unisex) from Genesis to G2F but they are somewhat more complex. There are other tutorials: 1. 2. My Genesis is then set to Base Resolution and 0 Subdivision. Delete G2F figure. General Concepts [Documentation Center] DAZ Studio 4 3D Content Creation Tools.

III - Textures, Surfaces and Materials [Documentation Center] The Wonderful World of Color 3.1 - Introduction In many 3D applications, when a model is created, by default that model will be a single color - usually gray. 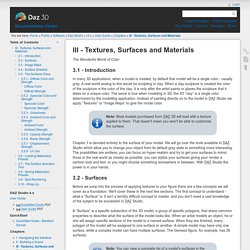 A real world analog to this would be sculpting in clay. When a clay sculpture is created the color of the sculpture is the color of the clay. It is only after the artist paints or glazes the sculpture that it takes on a unique color. Note: Most models purchased from DAZ 3D will load with a texture applied to them. Chapter 3 is devoted entirely to the surface of your model. 3.2 - Surfaces Before we jump into the process of applying textures to your figure there are a few concepts we will cover as a foundation. A “Surface” is a specific subsection of the 3D model, a group of specific polygons, that share common properties to describe what the surface of the model looks like. Note: You can view a complete list of a model's surfaces in the Surfaces pane. The concept may be easier to visualize with an example.

Loading Your New Morph On Genesis 2 Female in DAZ Studio. Creating a Single Dial Morph in Daz Studio 4.7 - Digi-Dotz 3D. Details Category: Daz Studio Tutorials This tutorial is for those who want to create in Daz Studio 4.7 a single dial morph for characters you have created/tweaked multiple morphs on. 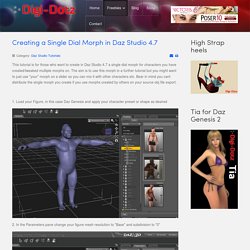 The aim is to use this morph in a further tutorial but you might want to just use "your" morph on a slider so you can mix it with other characters etc. Bear in mind you cant distribute the single morph you create if you use morphs created by others on your source obj file export. 1. 2. 3. 4. 5. 6. (before clicking accept you could change the property group so that it shows up in say, shaping/Actor/Female etc but we have left it at the default "morphs/morphloader") 7. 8. 9. 10. 11. 12. Daz -> Blender -> Daz discussion. Well hi there! 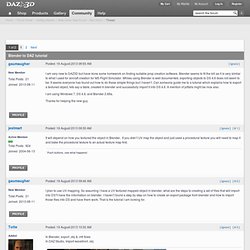 I’m always glad to hear from fellow Blender users getting into DS! First of all, whenever I say My Library, assume I mean “wherever your DS data, People, Vehicles and Props files are actually installed.” Daz Studio 4.5 tutorial - smoothing, poke through by darkhound1 on deviantART. Auto Fit old clothes new figures. Solving Poke Through. DAZ Studio 4 Transfer Utility. DazStudio missing manual. Update 09/03/2011- Preliminary written documentation for Daz Studio 4 is available here: wiki/software/dazstudio/4/userguide/plugins/cct/start Daz Studio Pro 4 has some really cool features. Unfortunately, written documentation is sparse. Daz has created video tutorials that will help users with this program but paradoxically they did not share this anywhere prominent on their website. Here is list of important YouTube tutorials: The Basics.