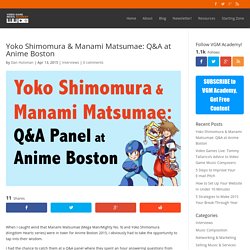 I had the chance to catch them at a Q&A panel where they spent an hour answering questions from fans. While most of the questions yielded answers that weren’t particularly useful for composers, I was able to capture the answers for three questions that I thought had some value to aspiring composers. Happily, I was the last person to ask a question before they shut down the session to clear the room for the next panel and asked them about the most common mistakes new composers make. 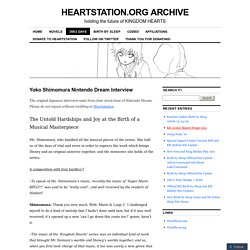 Please do not repost without crediting to Heartstation. The Untold Hardships and Joy at the Birth of a Musical Masterpiece Ms. Shimomura, who handled all the musical pieces of the series. She told us of the days of trial and error in order to express the work which brings Disney and an original universe together, and the memories she holds of the series. A composition with four hurdles!? –To speak of Ms. Nintendo Power Interview With Yoko Shimomura - News - Kingdom Hearts Insider. Details Published on June 29, 2011 @ 04:19 pm Written by Cecily Hello all! 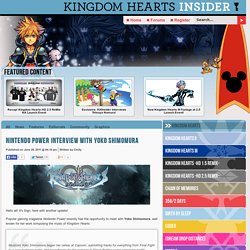 It's Sign, here with another update! Music: A Conversation with Yoko Shimomura. RPGFan: Can you tell us a little bit about your background? 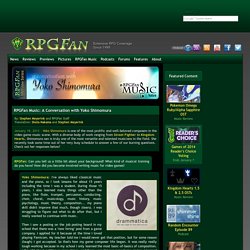 What kind of musical training do you have? How did you become involved writing music for video games? Yoko Shimomura: I've always liked classical music and the piano, so I took lessons for about 15 years including the time I was a student. During those 15 years, I also learned many things other than the piano, like flute, trumpet, percussion, conducting, choir, choral, musicology, music history, music psychology, music theory, composition... my piano skill didn't improve that much, though (tears). Then I saw a posting on the job posting board in my school that there was a "now hiring" post from a game company. Drammatica: City of Flickering Destruction RPGFan: How do you approach a new project? Street Fighter II’s Yoko Shimomura. Yoko Shimomura’s comical tone for Street Fighter II didn’t fit the normal Capcom style, but her decision to re-imagine the music of each character’s country helped make its soundtrack iconic. 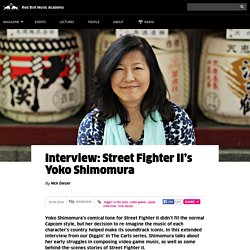 In this extended interview from our Diggin’ In The Carts series, Shimomura talks about her early struggles in composing video game music, as well as some behind-the-scenes stories of Street Fighter II. Is there any one song that made you fall in love with music? When I was young, the music I listened to most was actually classical. I loved the piano, so I started learning to play. Around when I was in junior high school, I went to see an orchestra every month. Did you have any idea of what you wanted to do before you graduated? I thought piano teachers would be in demand, since they generally have students, so maybe I could make a living doing that. How difficult was it to get into Capcom then? When I joined Capcom, I didn’t know anything about composing, especially game and digital music. 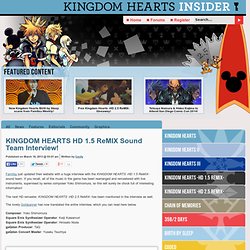 If you recall, all of the music in the game has been rearranged and remastered with live instruments, supervised by series composer Yoko Shimomura, so this will surely be chock full of interesting information! The next HD remaster, KINGDOM HEARTS -HD 2.5 ReMIX- has been mentioned in the interview as well. The lovely Goldpanner has now translated the entire interview, which you can read here below. 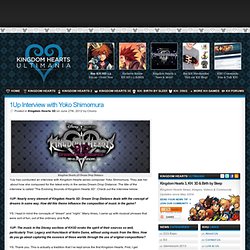 They ask her about how she composed for the latest entry in the series Dream Drop Distance. The title of the interview is called “The Evolving Sounds of Kingdom Hearts 3D”. Check out the interview below: 1UP: Nearly every element of Kingdom Hearts 3D: Dream Drop Distance deals with the concept of dreams in some way. YS: I kept in mind the concepts of “dream” and “night.” 1UP: The music in the Disney sections of KH3D evoke the spirit of their sources so well, particularly Tron: Legacy and Hunchback of Notre Dame, without using music from the films. YS: Thank you. 1UP: Dearly Beloved is a theme that became iconic after KH1, and yet it still sounds fresh in each subsequent installment. 1UP: Are you forced to think a bit differently when composing music for a handheld title as opposed to a console game? Yoko Shimomura. Yoko Shimomura (下村 陽子, Shimomura Yōko? 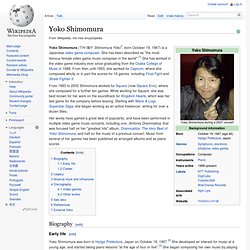 , born October 19, 1967) is a Japanese video game composer. She has been described as "the most famous female video game music composer in the world".[1] She has worked in the video game industry ever since graduating from the Osaka College of Music in 1988. From then until 1993, she worked for Capcom, where she composed wholly or in part the scores for 16 games, including Final Fight and Street Fighter II. From 1993 to 2002 Shimomura worked for Square (now Square Enix), where she composed for a further ten games. Kingdom Hearts - shimomura-3. Kingdom Hearts - shimomura-2. Yoko Shimomura (Kingdom Hearts, Parasite Eve Composer) Interview. Videogames have developed into a mature mainstream entertainment medium over the past few years. 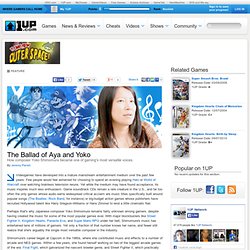 Few people would feel ashamed for choosing to spend an evening playing Halo or World of Warcraft over watching brainless television reruns. Yet while the medium may have found acceptance, its music inspires much less enthusiasm. Game soundtrack CDs remain a rare creature in the U.S., and far too often the only games whose audio earns widespread critical acclaim are music titles specifically built around popular songs (The Beatles: Rock Band, for instance) or big-budget action games whose publishers have recruited Hollywood talent like Harry Gregson-Williams or Hans Zimmer to lend a little cinematic flair. Interview with Yoko Shimomura (September 2009) In the first of a four part interview series at Symphonic Fantasies, Yoko Shimomura talked to us exclusively about her past, present, and upcoming works. 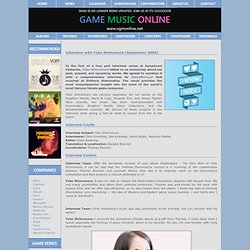 We agreed to combine it with a complementary interview by GameMusic.pl that occurred at Sinfonia Drammatica. The result provides the most comprehensive insight into the mind of the world's most famous female game composer. Yoko Shimomura has become legendary for her works on the Kingdom Hearts, Mario & Luigi, Parasite Eve, and Street Fighter. Interview: The Evolving Sounds of Kingdom Hearts 3D from 1UP. Egardless of our thoughts on the series as a whole, we here at 1UP have come to a general consensus that Kingdom Heats 3D: Dream Drop Distance soundtrack is all sorts of great. Throughout Sora's most robust handheld adventure, you'll be privy to a suite of music that pulls from both Square and Disney's past, while simultaneously providing sounds that pave the way for the future of the series.

It was with this love and appreciation that we approached series composer Yoko Shimomura and asked her about all things musical in KH3D. I came up with musical phrases that were sort of fun, out of the ordinary, and fluffy.