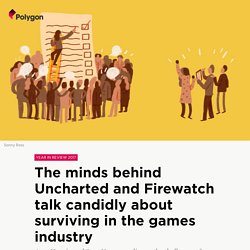 And sometimes they don’t. In 2017, Campo Santo, the studio that made Firewatch, announced that it was working on a new game, In the Valley of Gods. And Visceral Games, a studio that had been working on a single-player Star Wars game led by Amy Hennig, announced that it was closing. The Star Wars game was canceled. Polygon asked Sean Vanaman, a founder of Campo Santo and the lead writer of Telltale’s The Walking Dead: Season One, and Amy Hennig, the director and writer of the first three Uncharted games, to meet in person to discuss the present and future of video game storytelling. —Chris Suellentrop. Yara Khoury : « Plus les jeux vidéo grandissent, plus il est dur d’avoir une vue d’ensemble » La création d’un jeu vidéo à grand spectacle : un chantier pharaonique de plus en plus difficile à gérer de l’intérieur. 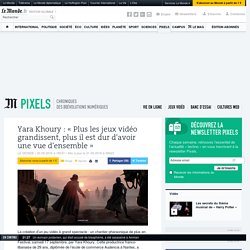 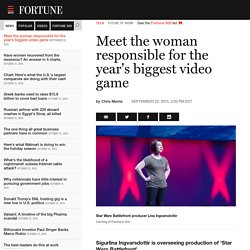 All rights reserved. Fortune.com is a part of the Time.com network of sites. Powered by WordPress.com VIP Email address or Password is incorrect Forgot Password? Want the Full Story? Privacy Policy Thank you for your interest in licensing Fortune content. 1. Rhianna's rise: Meet the writer behind Tomb Raider. Rhianna Pratchett is walking along a burbling stream in the heart of one of London's trendier districts, telling a story and, intermittently, pointing out local birds and other wildlife. 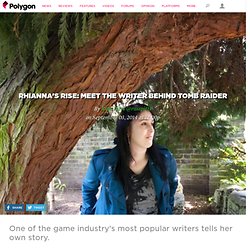 The story is a pleasant one — one with a happy ending. It's a story about a girl who grew up in the rural countryside of England, in a place called Somerset. Pratchett calls it "sheepy," as in "there are sheep. " The little girl is raised in the presence of those sheep. She learns to care for them and wears sweaters made of their wool.

As Pratchett tells the tale it sounds possible that it is not at all about her, but it is. Pratchett wrote the Overlord games. The Man Who Promised Too Much. Masterclass Jeux Vidéo Jean Guesdon. Siobhan Reddy. Shigeru Miyamoto, Nintendo’s man behind Mario. When Shigeru Miyamoto was a child, he didn’t really have any toys, so he made his own, out of wood and string. 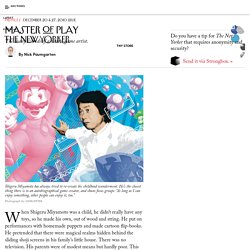 He put on performances with homemade puppets and made cartoon flip-books. He pretended that there were magical realms hidden behind the sliding shoji screens in his family’s little house. There was no television. His parents were of modest means but hardly poor. This was in the late nineteen-fifties and early nineteen-sixties, in the rural village of Sonobe, about thirty miles northwest of Kyoto, in a river valley surrounded by wooded mountains. Miyamoto has told variations on the cave story a few times over the years, in order to emphasize the extent to which he was surrounded by nature, as a child, and also to claim his youthful explorations as a source of his aptitude and enthusiasm for inventing and designing video games. Fishermen have a saying, in reference to the addictive sensation of a fish hitting your line: “The tug is the drug.”

He also studies himself. Jenova Chen Explains Journey: Social Relevance and Artistic Inspirations. I recently had the pleasure of meeting with Jenova Chen, the creative director of thatgamecompany and designer of flOw and Flower. 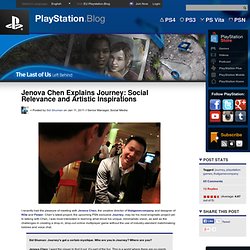 Chen’s latest project, the upcoming PSN exclusive Journey, may be his most enigmatic project yet. In talking with Chen, I was most interested in learning what drove his unique, minimalistic vision, as well as the challenges in creating a drop-in, drop-out online multiplayer game without the use of industry-standard matchmaking lobbies and voice chat. Sid Shuman: Journey’s got a certain mystique. Who are you in Journey? Where are you? SS: Journey’s a multiplayer game, but there’s no matchmaking or online lobbies. SS: What’s the core gameplay goal in Journey?

SS: Surfing on waves of sand looks like an interesting way to get around this very dynamic, shifting environment. SS: Did any particular artist inspire the visual style of Journey? SEGA’s Kim Sellentin on Producing in a Learning Culture. Kim Sellentin, Producer at SEGA Studios Australia, discusses her start as a QA tester, her approach of cultivating a learning culture in the studio, and strategies for current and future producers. 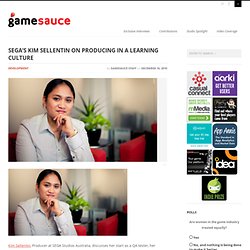 From Programming to Producing Sellentin and the rest of her production team having their daily portion of scrum. Although Kim Sellentin set out to be a programmer, she found a fitting path as a producer. During Sellentin’s software engineering studies, one of her instructors highlighted a game designer who worked for a local studio. “I remember thinking to myself, ‘Wow, I can make a career out of developing games? Soon after, Sellentin tracked down the designer and expressed her utmost interest in a position in quality assurance if anything opened up. ” I fell in love with my job and the game industry after the whole experience.” Medieval II Total War: Kingdoms, the first game Sellentin was involved in for the entire development cycle, was ultimately what hooked her. The Throws of Producing.