1bc7a97816787bda68f116c8551e4c5149de. Film Scoring 101 - The Lydian Mode. Modes and Video Games Music. All the Undertale leitmotifs. ALL OF THEM. What is a Leitmotif and How Does it Work in Films? The term leitmotif was first applied to the operas of Richard Wagner to describe a recurring melody that is associated with a certain character, people, object, place, emotion, or idea. 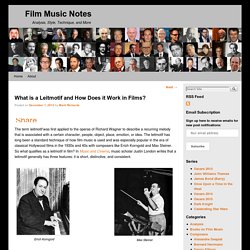 The leitmotif has long been a standard technique of how film music is used and was especially popular in the era of classical Hollywood films in the 1930s and 40s with composers like Erich Korngold and Max Steiner. So what qualifies as a leitmotif in film? In Music and Cinema, music scholar Justin London writes that a leitmotif generally has three features: it is short, distinctive, and consistent. Erich Korngold Max Steiner Feature 1: Short Length To say that a leitmotif is short does not mean that it can’t start out as, or be developed into, something longer. 6 Lessons in 6 Film Scores, by Michael Giacchino. Each one of composer Michael Giacchino's movie scores took a lifetime to write. 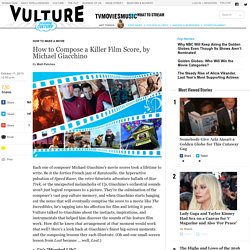 Be it the forties French jazz of Ratatouille, the hyperactive pulsation of Speed Racer, the retro-futuristic adventure ballads of Star Trek, or the unexpected melancholia of Up, Giacchino's orchestral sounds aren't just logical responses to a picture. They're the culmination of the composer's vast pop culture memory, and when Giacchino starts banging out the notes that will eventually comprise the score to a movie like The Incredibles, he's tapping into his affection for film and letting it pour.

Vulture talked to Giacchino about the instincts, inspirations, and instrumentals that helped him discover the sounds of his feature film work. 11 Ways to Find Immediate Inspiration for Your Next Composition - Envato Tuts+ Music & Audio Tutorial. In a recent tutorial I outlined a method for breaking out of writer's block from the outside in. 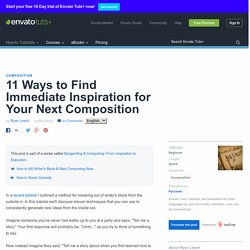 In this tutorial we'll discover eleven techniques that you can use to consistently generate new ideas from the inside out. Imagine someone you've never met walks up to you at a party and says, "Tell me a story. " Your first response will probably be, "Umm... " as you try to think of something to say. Now instead imagine they said, "Tell me a story about when you first learned how to drive.

" Now you'll probably be able to think of something to say. The blank page can be a writer's worst nightmare, but in a professional situation you can't wait around for lightning to strike. Here are eleven ways you can instantly generate a prompt for yourself to start writing your next composition or song. How to Write Theme & Variations - Envato Tuts+ Music & Audio Tutorial. If you have been following along over the past few months, we have been gradually expanding from the smallest musical ideas into larger and larger pieces of music. 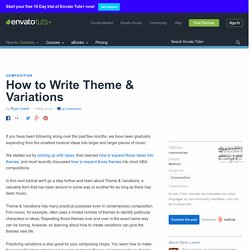 We started out by coming up with ideas, then learned how to expand those ideas into themes, and most recently discussed how to expand those themes into short ABA compositions. In this next tutorial we'll go a step further and learn about Theme & Variations, a valuable form that has been around in some way or another for as long as there has been music. Theme & Variations has many practical purposes even in contemporary composition. Film music, for example, often uses a limited number of themes to identify particular characters or ideas. GCSE Bitesize: Composition of film music. Transformation of the psycho theme. Morgan_uncg_0154M_10678. Hisaishid Away: An Analysis of Joe Hisaishis Film Scoring Techn. Music Theory: Hollywood Scales, Part 1. I thought it might be fun to explore some compositional tools that are used to convey ideas and emotions when writing music for picture or just in general. 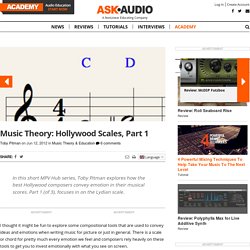 There is a scale or chord for pretty much every emotion we feel and composers rely heavily on these tools to get you to invest emotionally with what you see on screen. Knowing about scales (and there’s lots of them) and which ones are useful for certain emotional tasks is an important part of any composers toolkit. Knowing which scale does what can be a useful starting point for a composition. HARRY POTTER AND THE CHAMBER OF SECRETS (2002) – Thematic Analysis. By Frank Lehman In terms of thematic richness, the Harry Potter films are quite comparable to Star Wars, and exceeded perhaps o­nly by Hook. 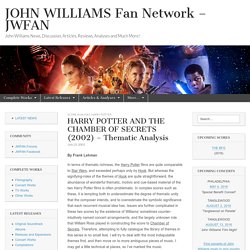 Film Score Harmony: Chords by Thirds - Envato Tuts+ Music & Audio Tutorial. Of all the harmonic devices I use regularly in my composing, none is more useful than non-diatonic chords a third apart. 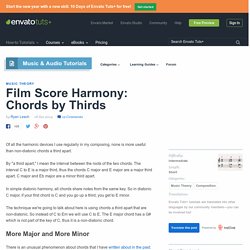 The technique we're going to talk about here is using chords a third apart that are non-diatonic. Celebrating Star Wars Themes, Part 1 of 6: Uses of the Force Theme. Through the first six films of the Star Wars saga, John Williams’ inimitable scores have generated a large body of musical themes that have played an inextricable part in building the fantasy world that is the backbone of the films. 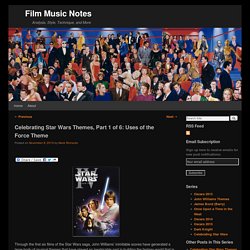 As a way of both celebrating these scores and building up to an analysis of the score for the upcoming Episode VII, I begin here a series of six analyses that will run through each of the six films, each post featuring a single theme that is introduced in the film under discussion. Star Wars (1977), the film that started it all, introduced a handful of themes, most of which recur in the Star Wars hexology of films. Musical Themes in "The Lord of the Rings" By Eric Rawlins Much has been said and written about Howard Shore's use of the Wagnerian leitmotif idea in his score for "The Lord of the Rings. 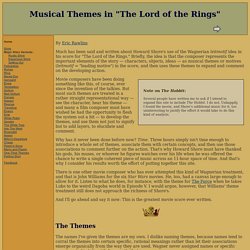 " Briefly, the idea is that the composer represents the important elements of the story — characters, objects, ideas — as musical themes or motives (leitmotif = "leading motive") in the score, and then uses these themes to expand and comment on the developing action. Note on The Hobbit: Several people have written me to ask if I intend to expand this site to include The Hobbit. Bear McCreary – Official site. I have been a fan of Ubisoft’s acclaimed Assassin’s Creed series since its inception. 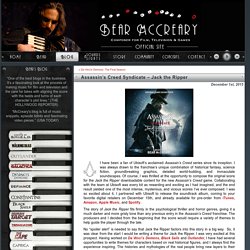 She’s put her touch on uber-popular games like Gears of War 2 & 3, Prince of Persia: The Forgotten Sands, and Transformers: Revenge of the Fallen. We thought it would be fun to pick her brain and get the gritty details of what it takes to develop a great game theme. A guided tour through the FTL soundtrack: analysis of themes. As I mention in the text writeup included with every copy, the FTL soundtrack is very self-referential. Lots of sounds, melodies and chords show up multiple times throughout. Here I’m going to break down three of the major motifs, point out each time they pop up, and tell you a bit about them and how they fit in with everything else. You might want to pull up the soundtrack in bandcamp so you can follow along. This is a very simple three-chord progression that was the very first thing I wrote for FTL.

I was trying to prove to the guys at Subset Games that I could make something fun and breezy, but also not overly saccharine. Video Analysis #1: Twisted Streets, Bastion. 8-Bit Analysis. PodQuest: The Musical Box #22: The song does not remain (exactly) the same. This edition of The Musical Box is dedicated to not only one, but two games: Super Mario Galaxy and Okami. The two have completely different gaming experiences, but they share a similar approach regarding the implementation of different arrangements of the same musical theme in revisited areas.Profiles: Game: Super Mario Galaxy Released: 2007 Platform: Wii Developer: Nintendo Composers: Mahito Yokota and Koji Kondo Game: Okami Released: 2006 (PS2) Plataforms: PS2, Wii, PSN Developer: Clover Composers: Masami Ueda, Hiroshi Yamaguchi, Hiroyuki Hamada, Rei Kondo, and Akari Groves.