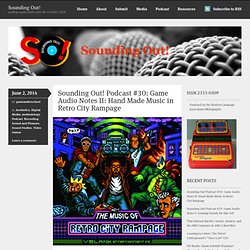 I wanted the sound design of RCR to be as nostalgic as possible. A Screenshot of OpenMPT software. OpenMPT is a music tracker (or mod tracker) program for Windows. Early sound designers needed to code the sounds in an arcane language called assembly code that was quite difficult to understand unless you were a computer programmer. Sounding Out! Podcast #29: Game Audio Notes I: Growing Sounds for Sim Cell. A pair of firsts! 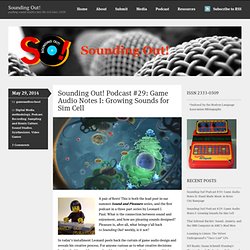 This is both the lead post in our summer Sound and Pleasure series, and the first podcast in a three part series by Leonard J. Paul. What is the connection between sound and enjoyment, and how are pleasing sounds designed? Pleasure is, after all, what brings y’all back to Sounding Out! Weekly, is it not? The Generative Music and Procedural Sound Design of Sim Cell. 20 years working and having fun with video games: interview with Leonard J. Paul. Hi Leonard, thanks for taking the time to talk to me. 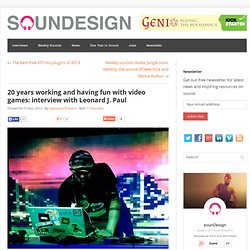 Your career started from studies in Computer Science, to go through the universe of sound design for video games and then come to academics, spreading your knowledge to young Sound lovers. Could tell us more about you and your work? I’ve been lucky enough to work in the games industry since 1994 when we were working on systems like the SNES and Genesis. These days I’m working on small indie projects that I like such as Vessel or Retro City Rampage as well as teaching game audio online at the School of Video Game Audio. I find game audio an amazing field since I’m able to combine my artistic and technical skills (plus teaching) into one discipline. I find it fun to get swept up by student’s excitement in game audio and I always have an eye out for new developments within the field. One of the hottest (and most critical) issues of these years in Sound communication is surely Education. 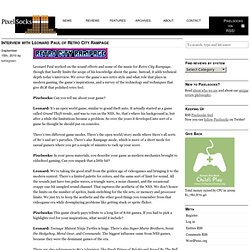 Instead, it adds technical depth today’s interview. We cover the game’s neo-retro style and what role that plays in modern gaming, the game’s inspirations, and a survey of the technology and techniques that give RCR that polished retro feel. Pixelsocks: Can you tell me about your game? Leonard: It’s an open world game, similar to grand theft auto. It actually started as a game called Grand Theft-tendo, and was to run on the NES. George Hufnagl's Blog - 3x5 Game Audio Interview with Leonard J Paul. The following blog post, unless otherwise noted, was written by a member of Gamasutra’s community. 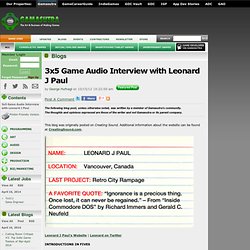 The thoughts and opinions expressed are those of the writer and not Gamasutra or its parent company. This blog was originally posted on Creating Sound. Additional information about the website can be found at CreatingSound.com. Leonard J Paul's Website | Leonard on Twitter 1) Using the word “sound” in each description (in any tense or plurality), list five points that describe yourself.Sounding board.Soundly positive.Sound mind.Sounded funny.Sounds good.2) What are three accomplishments of which your five-year-old self would be proud? 1) In your opinion, what are four characteristics that an audiophile should have? 1) In three days’ time, you will have finished: Video Game Audio Prototyping with Half-Life 2 (Leonard J. Paul) Adaptive Music in Vessel. Interview with Leonard J. Paul, of the School of Video Game Audio.

With the rise in popularity of sound design, and game audio as a career choice among audio engineers, there is a growing call for formal training and education courses that will prepare prospective professionals accordingly. 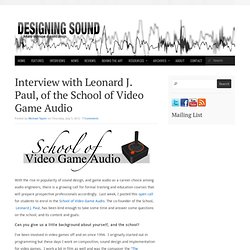 Last week, I posted this open call for students to enrol in the School of Video Game Audio. The co-founder of the School, Leonard J. Paul, has been kind enough to take some time and answer some questions on the school, and its content and goals. Can you give us a little background about yourself, and the school?

I’ve been involved in video games off and on since 1994. The idea of the school has been around for a while from conversations Gordon and I were having a few years back. What were the main drivers behind the venture? I hope that our school will raise the level of game audio knowledge internationally and help people make their own games that incorporate their own unique cultures. What kind of principles will students cover during the course? AES-Feb2013/AES2013-GoingOldSchool-ChiptunesAndTrackersInGames-LeonardJPaul.mp3.