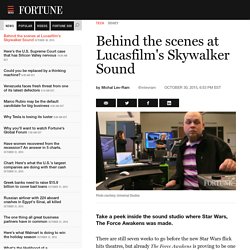 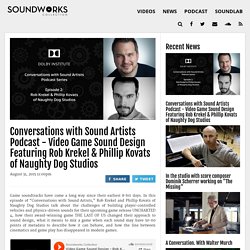 In this episode of “Conversations with Sound Artists,” Rob Krekel and Phillip Kovats of Naughty Dog Studios talk about the challenges of building player-controlled vehicles and physics-driven sounds for their upcoming game release UNCHARTED 4, how their award-winning game THE LAST OF US changed their approach to sound design, what it means to mix a game when each sound may have 50-60 points of metadata to describe how it can behave, and how the line between cinematics and game play has disappeared in modern games.

Learn more about the Dolby Institute:www.dolby.com/us/en/dolby-institute/podcasts.html Subscribe to the SoundWorks Collection Podcast: About "Conversations with Sound Artists" Podcast: Sound is an art and a craft that many people appreciate but that few know much about. Conversations with Sound Artists Podcast - Video Game Sound Design Featuring Rob Krekel & Phillip Kovats of Naughty Dog Studios. Sound of Hyper Light Drifter: Part 3. The Sound Design of Journey. 'Sup, internet. 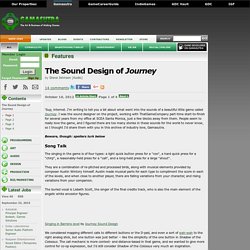 I'm writing to tell you a bit about what went into the sounds of a beautiful little game called Journey. I was the sound designer on the project, working with ThatGameCompany part-time start-to-finish for several years from my office at SCEA Santa Monica, just a few blocks away from them. People seem to really love the game, and I figured there are too many stories in these sounds for the world to never know, so I thought I'd share them with you in this archive of industry love, Gamasutra. Beware, though: spoilers lurk below The singing in the game is of four types: a light quick button press for a "coo", a hard quick press for a "chirp", a reasonably-held press for a "call", and a long-held press for a large "shout". They are a combination of re-pitched and processed birds, along with musical elements provided by composer Austin Wintory himself.

"God of War Ascension" Audio Design. How To Record Extremely Loud Things – Randy Coppinger interviews Chuck Russom and Michael Raphael. When it comes to microphones, I don’t think I’ve ever come across anyone with quite the same level of enthusiasm as Randy Coppinger. 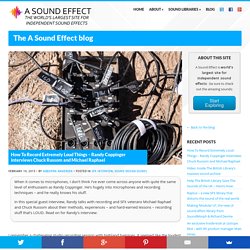 He’s hugely into microphones and recording techniques – and he really knows his stuff. In this special guest interview, Randy talks with recording and SFX veterans Michael Raphael and Chuck Russom about their methods, experiences – and hard-earned lessons – recording stuff that’s LOUD. 18 expert sound design tips and tricks. Ever found yourself losing focus and direction during a sound design session? 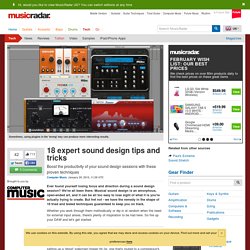 We've all been there. Musical sound design is an amorphous, open-ended art, and it can be all too easy to lose sight of what it is you're actually trying to create. But fret not - we have the remedy in the shape of 18 tried and tested techniques guaranteed to keep you on track. Whether you work through them methodically or dip in at random when the need for external input arises, there's plenty of inspiration to be had here.

So fire up your DAW and let's get started. Psychology of 10 Years of Sound in World of Warcraft. Blindfolded character seemed appropriate. 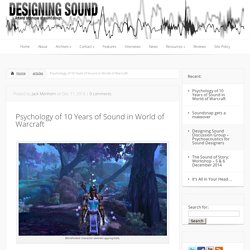 For this month’s topic of “Psychoacoustics” I thought I’d stretch the definition a bit and finally write an article I have wanted to for a while now, and discuss the sound design of World of Warcraft. Community Sound FX Libraries. There are dozens of talented sound designers and field recordists worldwide. 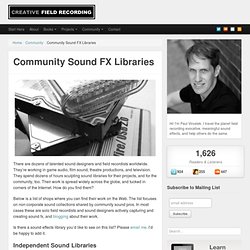 They’re working in game audio, film sound, theatre productions, and television. They spend dozens of hours sculpting sound libraries for their projects, and for the community, too. Their work is spread widely across the globe, and tucked in corners of the Internet. How do you find them? Alien attacks and Fifa 15 chants: The art of video game noise. 6 October 2014Last updated at 19:21 ET By Leo Kelion Technology desk editor WATCH: BBC Click's Mark Cieslak finds Alien: Isolation "an exercise in nerve-shredding fear" Sound design is often the unsung hero of video games. 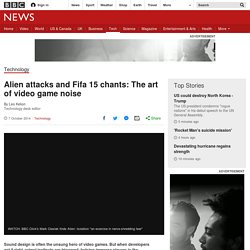 But when developers get it right, primal instincts are triggered, helping immerse players in the action. Below, the brains behind the soundscapes of five of this year's biggest releases discuss their art in exclusive interviews with the BBC: The Evil Within - "Audio Design: The Sounds of Evil” 5 Unusual Things Every Sound Designer Should Try. There are so many methods for getting great sounds from either field recording, source libraries, synthesizers, and so on. 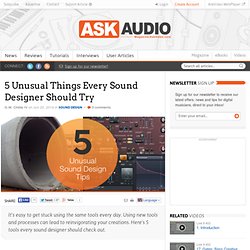 But, the obvious can become both tedious and well, boring to both yourself and your clients, over time. If you’re looking for a few things to separate you from the rest. Here are a few tools that have served me well. Binaural Recordings Back in the earlier days of PC gaming, A3D was a hot new, binaural encoding technology appearing on select audio cards. How audio wizards are shaping the sound of the next generation of PC games. Get ready, PC gamers—change is coming. 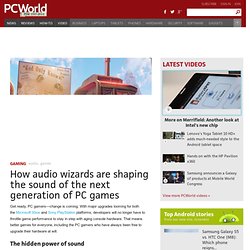 With major upgrades looming for both the Microsoft Xbox and Sony PlayStation platforms, developers will no longer have to throttle game performance to stay in step with aging console hardware. That means better games for everyone, including the PC gamers who have always been free to upgrade their hardware at will. Official Call of Duty®: Advanced Warfare - "Sound Design" Behind the Scenes Video.

You quickly realise how crucial the shouts of squad members, the bullet cracks, jets roaring, or just the sound of your soldier vaulting over a concrete slab, are for the overall Battlefield experience. With several BAFTA, GANG and AIAS awards under their belt, the DICE audio team was confident in taking on Battlefield 4 – but there were many new challenges along the way. Ask DICE: Bence Pajor on Sound Design - The Battlefield Blog. 02.22.14 [DICE] SlyOkapi | 65 comments. Perceived Satisfaction – Battlefield 4′s User Experience Sound Design – Sweet Justice - awesome audio content and services to the games industry. User experience is heavily influenced by sonic identity – the crunch of the crisp (or chip to our American colleagues), the crack of opening a tinned beverage, the weight of a car door slam.

All of these are audible signatures that the general population are not only accustomed to – it is something that is expected. Imagine taking away the sound from any one of those examples, the expectation will have not been met and the end user will most likely experience dissatisfaction. I approached the creation of the user experience and interface sounds for Battlefield 4 with this mindset (I will refer to them in this article as UX sounds) – not what the user wants to hear, but what they expect to hear. When a user unlocks that weapon that they’ve played 100 matches to achieve, when a player levels up after helping the team win that match that they were sure was lost. SFX Independence – June 2014. A quick round-up of recent releases from independent sound designers … Sonic Salute – Rock & Roll First up this month we come bearing gifts – an exclusive 20% off coupon for the latest Sonic Salute library pack.

ROCK & ROLL: Rock/Concrete/Metal Impacts and Dirt Debris contains over 300 LCR recordings of rolling rocks, rock and concrete impacts, dirt, debris, you name it. Basically, all the rock, with a lot of extra roll. George Valavanis. Behind the scenes on Killzone Shadow Fall. The team behind Killzone Shadow Fall has released a new video explaining the process behind creating the sounds of the game, which took place at London-based post-production and Foley facility, Hackenbacker.

"With the next gen platform all different areas of the game would have a lot more capabilities - the effects team, the art team, the characters all have more things on screen at the same time. Now if we decided to place sound for all of those things at once it would just be total chaos," explains lead sound designer Lewis James. "So we had to develop a system that knew what was interesting to the player.

" The Weblog Q&A: Sound in Thatgamecompany's Journey. In development since 2009, Journey by Thatgamecompany is due out the week of March 13. Journey Sound Design’s stream. The Sound Design of Journey. The Sound Design of The Banner Saga. Berklee Sound Design Network. Game Audio as Process. It is Monday morning. So I thought i’d put something together that i’ve been meaning to do for a while, and that is a process document which details some of the high-level decision making and processes that go into the creation and implementation of sound for a game from the asset to the code.

Audio Iteration Process [Click to Enlarge] The Sound of Planetside 2. Charles Deenen Special: 100 Whooshes in 2 Minutes. Posted by misazam on Friday, February 26, 2010 · 24 Comments. Janet Hsu > Manage Blog. The Sony PlayStation Music and Sound crew discuss their brand-new facility for game audio, in the September 2013 issue of Mix. Sep 1, 2013 9:00 AM, Mix, By Tom Kenny // Photos By Michael Coleman/Sean Donnelly Most, but not all, of the San Mateo-based Sony PlayStation Music and Sound crew in the new facility’s live recording room, which can hold up to 35 pieces comfortably, with windows to both the API and Foley rooms and a glass wall allowing for natural light.

Sound Design Guide: Emotional States & Sound Design. How to get sound effects in your indie game. SKULLGIRLS AOD2013 - PART 5 - FISHBONE GANG, THE LAST HOPE, SOUND DESIGN. Audio Special: Foley for games. An hiss and a clang: how sound design works in real life. Hi Philip, I read from your LinkedIn profile that you’re living and working in UK. Can you tell us more about you and your activities? Hi Gianpaolo, my main hobby is as a guitar player/singer/songwriter – I’ve been playing and writing since I was about 11 and studied Creative Music and Sound Technology at university.

Nick Ryan (The Nightjar, Papa Sangre) : Sound Design Mini Masterclass. Soda.swedish-ict.se/4048/1/Game_Sound_Experience.pdf. The Sound of Planetside 2. The guide to sound effects. I like to think of such sounds as having two general components: a ‘defining’ one, and an ‘impact’ one. The defining one is what sounds up front and tells the listener what the sound is, especially if combined with picture. The impact one can be anything at all, designed only to pump up the sound to hyper-real.