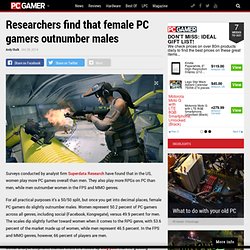 They also play more RPGs on PC than men, while men outnumber women in the FPS and MMO genres. For all practical purposes it's a 50/50 split, but once you get into decimal places, female PC gamers do slightly outnumber males. Women represent 50.2 percent of PC gamers across all genres, including social (Facebook, Kongregate), versus 49.9 percent for men. The scales dip slightly further toward women when it comes to the RPG genre, with 53.6 percent of the market made up of women, while men represent 46.5 percent.

Anita Sarkeesian on Video Games’ Great Future. SAN FRANCISCO — I remember, when I was a kid, desperately trying to persuade my mom and dad to buy me a Game Boy. 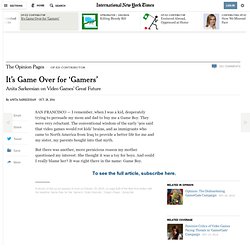 They were very reluctant. The conventional wisdom of the early ’90s said that video games would rot kids’ brains, and as immigrants who came to North America from Iraq to provide a better life for me and my sister, my parents bought into that myth. 10 powerful women in video games. Women Get In on the Action in Video Games. Feministfrequency. Content Warning: This educational episode contains graphic sexual and violent game footage. 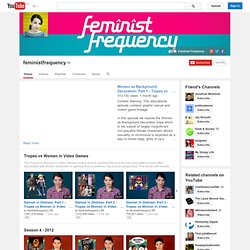 In this episode we explore the Women as Background Decoration trope which is the subset of largely insignificant non-playable female characters whose sexuality or victimhood is exploited as a way to infuse edgy, gritty or racy flavoring into game worlds. These sexually objectified female bodies are designed to function as environmental texture while titillating presumed straight male players. Sometimes they're created to be glorified furniture but they are frequently programmed as minimally interactive sex objects to be used and abused. Full transcript, links and resources available at: ABOUT THE SERIESThe Tropes vs Women in Video Games project aims to examine the plot devices and patterns most often associated with female characters in gaming from a systemic, big picture perspective. 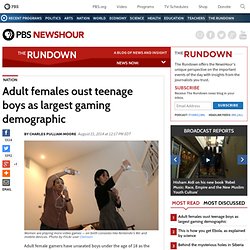 Photo by Flickr user Clemson Adult female gamers have unseated boys under the age of 18 as the largest video game-playing demographic in the U.S., according to a recently published study from the Entertainment Software Association, a trade group focused the U.S. gaming industry. While men still account for the majority of the U.S. gaming population, the number of women playing games on both consoles and mobile devices is up to 48 percent, from 40 percent in 2010. The spike in the number female gamers is likely tied to widespread smartphone adoption. In addition to traditional PCs and the Nintendo Wii game console, women were more likely to game on their mobile devices, and were just as likely as men to play on Apple’s iPhone and iPad platforms. What Is Classical Music's Women Problem? : Deceptive Cadence. Hide captionAustralian conductor Simone Young, the outgoing artistic director of the Hamburg State Opera. 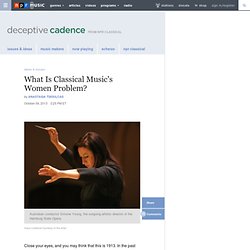 Klaus Lefebvre/Courtesy of the artist Australian conductor Simone Young, the outgoing artistic director of the Hamburg State Opera. Close your eyes, and you may think that this is 1913. In the past few days, the classical music community has been set aflame by recent comments from three prominent male conductors who are — steel yourself — actually saying that women are not capable of standing on the podium. To my daughter's high school programming teacher. Nearly half of all video-gamers are women. A visitor to this year's Electronic Entertainment Expo in Los Angeles plays a demo of "Warframe" at the Sony Playstation 4 booth. 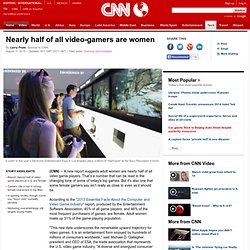 Report: Almost half of video game players in U.S. are femaleGamers cite a rise in strong female characters in top titlesIn gaming circles, though, some say "boys' club" mentality persistsMarketing overwhelmingly still targets young males (CNN) -- A new report suggests adult women are nearly half of all video game players. That's a number that can be read in the changing tone of some of today's top games. But it's also one that some female gamers say isn't really as close to even as it should be. According to the "2013 Essential Facts About the Computer and Video Game Industry" report, produced by the Entertainment Software Association, 45% of all game players, and 46% of the most frequent purchasers of games, are female.

Confessions of a 'Composeress' In The Score, American composers on creating “classical” music in the 21st century. 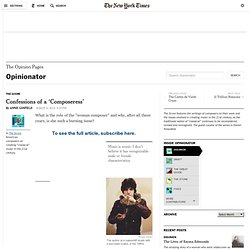 What is the role of the ”woman composer” and why, after all these years, is she such a burning issue? I’ve taken part in arguments on the subject in meetings, concert halls, seminars and bars. The topic is a hot one in the media, too. In some quarters we have variously been declared dead, underrepresented, underserved, less likely to take risks and more reluctant to ask for anything.

As a woman and a composer, I would like to declare myself alive, represented, served, eager to take risks and downright dogged when it comes to asking for things. Music is music: I don’t believe it has recognizable male or female characteristics. A group for women in the video game industry and their allies. WIGI Home.