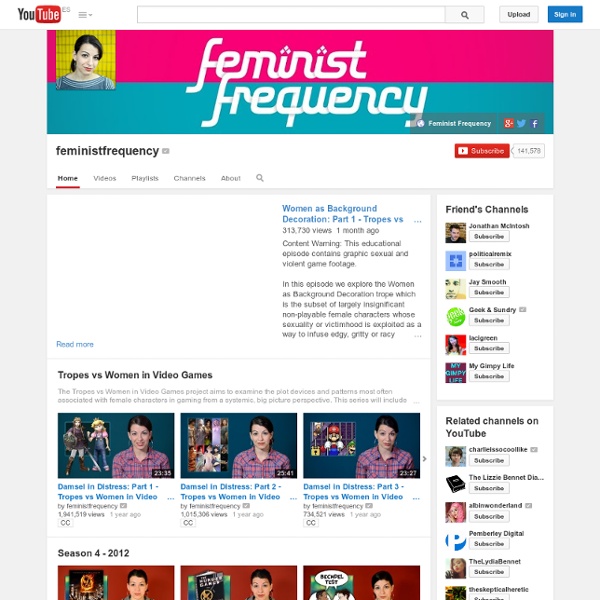 Content Warning: This educational episode contains graphic sexual and violent game footage. In this episode we explore the Women as Background Decoration trope which is the subset of largely insignificant non-playable female characters whose sexuality or victimhood is exploited as a way to infuse edgy, gritty or racy flavoring into game worlds. These sexually objectified female bodies are designed to function as environmental texture while titillating presumed straight male players. Sometimes they're created to be glorified furniture but they are frequently programmed as minimally interactive sex objects to be used and abused. Full transcript, links and resources available at: ABOUT THE SERIESThe Tropes vs Women in Video Games project aims to examine the plot devices and patterns most often associated with female characters in gaming from a systemic, big picture perspective. OTHER TROPE VIDEOS:Damsel in Distress Part 1: in Distress Part 2: in Distress Part 3: Male Character:

Sexual Dimorphism in World of Warcraft Game designer-in-training Andrea Rubenstein has just published a great article about fantasy bodies in MMOs, focusing in particular on sexual dimorphism in World of Warcraft. She points out the bizarre differences between male and females of nonhuman races, asking whether it makes any kind of sense that female Draenei would be so small in comparison to their male counterparts: The race with perhaps the starkest contrast between the sexes would be the Draenei. Women significantly outnumber teenage boys in gamer demographics Women are playing more video games — on both consoles like Nintendo’s Wii and mobile devices. Photo by Flickr user Clemson Adult female gamers have unseated boys under the age of 18 as the largest video game-playing demographic in the U.S., according to a recently published study from the Entertainment Software Association, a trade group focused the U.S. gaming industry. While men still account for the majority of the U.S. gaming population, the number of women playing games on both consoles and mobile devices is up to 48 percent, from 40 percent in 2010. The spike in the number female gamers is likely tied to widespread smartphone adoption. In addition to traditional PCs and the Nintendo Wii game console, women were more likely to game on their mobile devices, and were just as likely as men to play on Apple’s iPhone and iPad platforms.

Non-Analog Gaming: Bastion and men as automatic protagonists [SPOILER WARNING: This post deals with Bastion, an excellent action-RPG PC game available through Steam. Be warned that some pretty serious spoilers lie within; if you haven't played and are a fan of action-RPGs, I'd recommend picking up a copy and playing before coming back to this post. Bastion is easily the best action-RPG I've played since Kingdom Hearts.] I’ll admit, folks, that without a regular tabletop group, I play video games just as much as I play tabletop or board games these days.

Esther Newton Esther Newton (born 1940, New York) is an American cultural anthropologist best known for her pioneering work on the ethnography of lesbian and gay communities in the United States. Newton was born in New York. She studied history at the University of Michigan and received her BA with distinction in 1962 before starting graduate work in anthropology at the University of Chicago under David M. 10 powerful women in video games © Time Inc. All rights reserved. Fortune.com is a part of the Time.com network of sites. Powered by WordPress.com VIP Email address or Password is incorrect Diane Torr Performance Artist Diane Torr Diane Torr is a performance artist working in dance, drag king performance, installation, film and video. Download Diane’s complete resume here. Originally from Aberdeen, Scotland, after graduating from Dartington College of Arts, England, Diane moved to New York in 1976.

Anita Sarkeesian on Video Games’ Great Future SAN FRANCISCO — I remember, when I was a kid, desperately trying to persuade my mom and dad to buy me a Game Boy. They were very reluctant. The conventional wisdom of the early ’90s said that video games would rot kids’ brains, and as immigrants who came to North America from Iraq to provide a better life for me and my sister, my parents bought into that myth. Lost Humanity 15: Booth Babes I was disappointed not to make it to the Eurogamer Expo at the weekend there. By all accounts it was a great event, and it managed to distract people from the inevitability of death for a few days. I was having to enjoy the event vicariously, by stalking those people who did attend on Twitter and Facebook. Here's the thing, though. Something kept coming up.