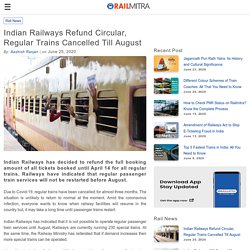 The situation is unlikely to return to normal at the moment. Amid the coronavirus infection, everyone wants to know when railway facilities will resume in the country but, it may take a long time until passenger trains restart. Indian Railways has indicated that it is not possible to operate regular passenger train services until August. Railways are currently running 230 special trains. At the same time, the Railway Ministry has reiterated that if demand increases then more special trains can be operated.

Indian Railways Will Convert Many Passenger Trains into Express Trains. Indian Railways, which has lost millions of rupees due to COVID-19, is now trying to regain its old rhythm. 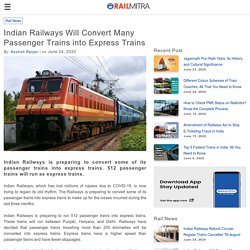 The Railways is preparing to convert some of its passenger trains into express trains to make up for the losses incurred during the last three months. Indian Railways is preparing to run 512 passenger trains into express trains. These trains will run between Punjab, Haryana, and Delhi. Jagannath Puri Rath Yatra: Its History and Cultural Significance. The Ratha Yatra in Puri, Odisha is India’s largest chariot festival. 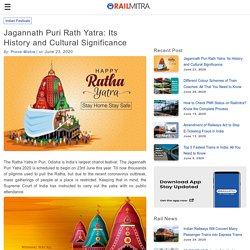 The Jagannath Puri Yatra 2020 is scheduled to begin on 23rd June this year. Till now thousands of pilgrims used to pull the Ratha, but due to the recent coronavirus outbreak, mass gatherings of people at a place is restricted. Keeping that in mind, the Supreme Court of India has instructed to carry out the yatra with no public attendance. The court ordered the Odisha government to maintain a record of persons allowed in Rath Yatra after testing the details of their medical conditions. It also said that before, during and after Rath Yatra, those engaged in pulling the chariot; will maintain social distance. Zones of Indian Railway List. Indian Railways introduced boarding pass facilities like airports. Indian Railways has started a unique experiment amid the coronavirus epidemic. 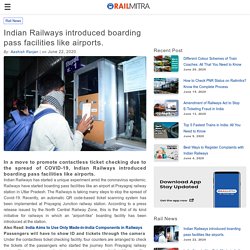 Railways have started boarding pass facilities like an airport at Prayagraj railway station in Uttar Pradesh. The Railways is taking many steps to stop the spread of Covid-19. Recently, an automatic QR code-based ticket scanning system has been implemented at Prayagraj Junction railway station. According to a press release issued by the North Central Railway Zone, this is the first of its kind initiative for railways in which an “airport-like” boarding facility has been introduced at the station.

Different Colour Schemes of Train Coaches: All That You Need to Know. Special types of symbols are used to explain different things in the Indian Railways like track symbols, platform symbols, etc. 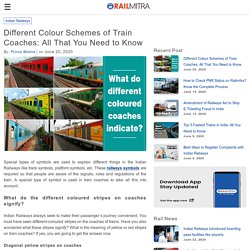 These railways symbols are required so that people are aware of the signals, rules and regulations of the train. A special type of symbol is used in train coaches to take all this into account. Top 5 Fastest Trains in India: All You Need to Know. The Indian Railways is one of the largest and fastest railways in the world, with a total capacity of carrying more than 1.5 million passengers per day. 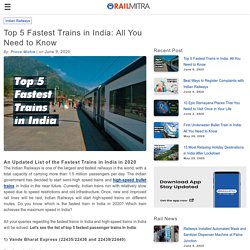 The Indian government has decided to start semi-high speed trains and high-speed bullet trains in India in the near future. Currently, Indian trains run with relatively slow speed due to speed restrictions and old infrastructure. Railways Installed Automated Mask and Sanitizer Dispenser Machine at Patna Junction. To prevent the corona epidemic, the railway has instructed passengers and employees to apply face masks and sanitize their hands from time to time. 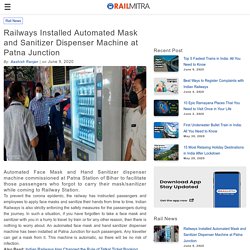 Indian Railways is also strictly enforcing the safety measures for the passengers during the journey. In such a situation, if you have forgotten to take a face mask and sanitizer with you in a hurry to travel by train or for any other reason, then there is nothing to worry about. An automated face mask and hand sanitizer dispenser machine has been installed at Patna Junction for such passengers.

Any traveller can get a mask from it. This machine is automatic, so there will be no risk of infection. Indian Railways Has Changed the Rule of Tatkal Ticket Booking. In the growing cases of Corona crisis, passengers travelling from one state to another will now have to give more information besides the address in the reservation ticket form. 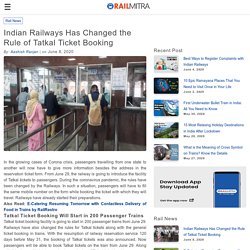 From June 29, the railway is going to introduce the facility of Tatkal tickets to passengers. During the coronavirus pandemic, the rules have been changed by the Railways. In such a situation, passengers will have to fill the same mobile number on the form while booking the ticket with which they will travel. Railways have already started their preparations. List of All the Trains Arriving Departing From Pt Deen Dayal Upadhyaya Jn (ddu ) 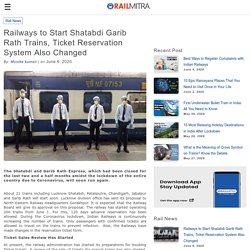 Lucknow division office has sent its proposal to North Eastern Railway Headquarters Gorakhpur. It is expected that the Railway Board will give its approval on this proposal. The railway has started operating 200 trains from June 1. For this, 120 days advance reservation has been allowed. During the Coronavirus lockdown, Indian Railways is continuously increasing the number of trains. Ticket Sales Review Has Started At present, the railway administration has started its preparations for booking Tatkal tickets. List of All the Trains Arriving Departing From New Delhi (ndls ) Best Ways to Register Complaints with Indian Railways. Millions of people travel daily by trains in the country. 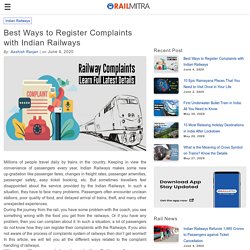 List of 200 Trains Running From June 1. 10 Epic Ramayana Places That You Need to Visit Once in Your Life. Ramayana is one of the most important symbols of our country’s cultural heritage and national identity. The Ramayana belongs to a class called Kavya or epics, in which the form is considered more important than the stories and poetic ornament of Alamkara is abundantly applied. Ramayana is an epic narrative poem written in Sanskrit, the ancient language of India. Probably written in the 2000s BC, Ramayanas is attributed to a wise male figure called Rama who is called ‘Maryada Purushottam‘. Although it is a fairly long poem with over 24,000 verses, the narrative is interspersed with philosophy, ethics, and written duties. The story of Ramayana revolves around politics, morality, loyalty, battles between demons and tribes, etc. Lord Rama travelled to different parts of India during his lifetime and those places are now worshipped with great reverence.

We have curated a list of 10 epic places that Lord Rama travelled during his journey. 1. Where Lord Rama began His journey. Railways Developed New Technique to Manufacture PPE Kits. Indian Railways, which started manufacturing personal protective equipment (PPE) in its various production units, has developed a process of sewing with hot air seam seal tape for high reliability. According to Railway Ministry officials, a new technique has been developed by Parel Workshop of Central Railway, in which the process of sewing PPE kits with hot air seam sealing tape has been developed. This PPE Kits Will Ensure High Reliability An official said that this process has enabled higher rates of production as the tape application is fully automated and this has resulted in better seam sealing due to the fusion of the tape with the fabric, which will ensure high reliability to medicos in long-term use.

Also Read: 24 Pairs of Special Trains Started Operating For Bihar in Lockdown 5 Seam by Hot Air Tape Was Found to Be Effective and Reliable The official said the sample coverall was tested at the Ordnance Factory in Muradnagar and passed for both fabric and seam. First Underwater Bullet Train in India: All You Need to Know. India is reportedly considering a number of high-speed rail projects, including one linking Mumbai and Ahmedabad, and is said to be considering building a high-speed rail line between the two cities, as well as one linking Mumbai with Delhi. It could also be easier for the country to invest in medium-speed trains that could run on the existing system than to pay for the specialized infrastructure needed to run high-speed trains. The bullet trains, which travel at a maximum speed of 320 kilometers per hour, are to cover the distance of 508 km from Mumbai to Ahmedabad in two hours and seven minutes.

Along the route, they will cover twelve stations and can expect top speeds of up to 320 kilometers per hour. India’s railways are currently experiencing problems with railway safety, but this problem could soon be resolved. According to a report, the Bullet Train project also has undersea tunnels and this technology can benefit the construction sector in India. 24 Pairs of Special Trains Started Operating For Bihar in Lockdown 5. The process of relaxation in the coronavirus lockdown 5.0 has started.

The first phase of exemption in Lockdown 5.0 has started from today. Train travel has also become easier. In Bihar, 24 pairs of additional special trains have also started operating from today. Several types of advisories have been issued by the Railways for travelling by train. Along with the railway personnel, all passengers will also have to follow the advisories. List of All the Trains Arriving Departing From Howrah Jn (HWH ) Railways Services will Shut Down Due to Technical Issues. Highlight: • Railway services will be closed for some time • Even the enquiry system will not work.

What is the Meaning of Cross Symbol on Trains? Know the Details. Central Railway Will Run Additional Trains for North India. List of All the Trains Arriving Departing From Abjuganj (AJUG) IRCTC: Railways Cancelled Ticket Concession for All 30 Categories. Rail services were closed for a long time to prevent the spread of corona infection. But in the last few weeks, first, the Shramik special trains started operating followed by the passenger trains. List of All the Trains Arriving Departing From ABHAYAPURI ASAM AYU. Indian Railways to Operationalise 2600 Trains in Next 10 Days.

Advance Reservation Period for Special Trains Increased From 7 Days to 30 Days. RailMitra PNR Status Prediction: Everything That You Need to Know. Your ticket could be on the waiting list at the time of booking, which means your ticket has been booked but no seat or berth has been allocated to you. Depending on how many tickets get cancelled, your waiting ticket can get confirmed. To check the current status of your waiting list ticket, you can use the PNR status feature of RailMitra.

Online Ticket Booking Open Today for 200 Trains Running From June 1. List of All the Trains Arriving Departing From ABHANPUR JN AVP. Zero-Based Time Table: Railways Formed Committee for New Networks. Best food for long train journeys. Planning a journey is exciting and delightful, but also leaves you in a state of bewilderment, when it comes to food. Whether it’s a planned long journey or a short train journey, one of the biggest concerns is to decide about the food to savor in the route for a better food experience all along the journey.