Enterprise Mobility in 2016: Get ready to Manage EMM Opportunities - Hi-Tech ITO. Smartphones and hand-held devices have multiplied in the last couple of years! 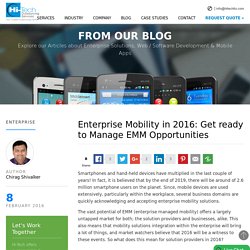 In fact, it is believed that by the end of 2019, there will be around of 2.6 million smartphone users on the planet. Since, mobile devices are used extensively, particularly within the workplace, several business domains are quickly acknowledging and accepting enterprise mobility solutions. The vast potential of EMM (enterprise managed mobility) offers a largely untapped market for both; the solution providers and businesses, alike. This also means that mobility solutions integration within the enterprise will bring a lot of things, and market watchers believe that 2016 will be a witness to these events. So what does this mean for solution providers in 2016? Though Apple’s mobile handset sales dipped for first time since 2003, they always have taken the center stage. This scenario requires a close collaboration between leading device manufactures and networking vendors. Android - Set to Beat Mobile OS Competition. To be in team Android or in team iOS, is the biggest dilemma faced by the modern-day mobile users! 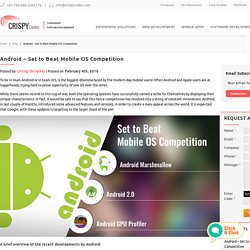 Often Android and Apple users are at loggerheads, trying hard to prove superiority of one OS over the other. While there seems no end to this tug-of-war, both the operating systems have successfully carved a niche for themselves by displaying their unique characteristics. In fact, it would be safe to say that this fierce competition has resulted into a string of constant innovations. Android, in last couple of months, introduced some advanced features and versions, in order to create a mass appeal across the world. It is expected that Google, with these updates is targeting to the larger share of the pie! A brief overview of the recent developments by Android: Android Marshmallow When finally Google rolled out Android Marshmallow in October 2015, it created quite a buzz among the app developers and users, alike.

Android 2.0 GPU Profiler Tool About the Author: Is Free Basics the way to go; or you are fooled by ISPs and Facebook? In a global, data-driven business environment, digital evolution is driving the market, creating, and modifying national policies, it has been no surprise that Facebook is partnering with telecom companies in close to 40 developing nations in Africa and South Asia, to provide what it has termed ‘Free Basics’ to the people of those countries. 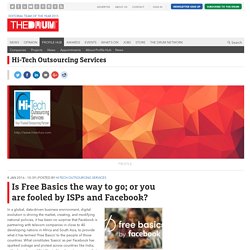 What constitutes ‘basics’ as per Facebook has sparked outrage and protest across countries like India, with a large base of Net Neutrality advocates arguing that this profit-driven initiative by the social media giant only gives them and the telecom service provider more control over what the user can access, and for a mass of first-time-users, promotes a very skewed notion of Facebook being the Internet. There is an ongoing debate, and litigation, in the USA, about keeping the Internet free, with the Federal Communications Commission citing the First Amendment while defending its rules that regulate the internet service providers.

About Author: Native app or Cross Platform App: Decide even before the Wireframe Stage. Mobile app development may prove deceptive, unless you are equipped with in-depth planning, precision and streamlining of processes to create a final app. 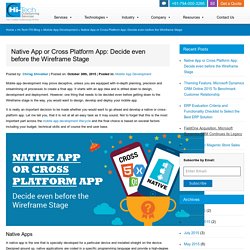 It starts with an app idea and is drilled down to design, development and deployment. However; one thing that needs to be decided even before getting down to the Wireframe stage is the way, you would want to design, develop and deploy your mobile app. It is really an important decision to be made whether you would want to go ahead and develop a native or cross-platform app. Let me tell you, that it is not at all an easy task as it may sound. Not to forget that this is the most important part across the mobile app development lifecycle and the final choice is based on several factors including your budget, technical skills and of course the end user base. Native Apps A native app is the one that is specially developed for a particular device and installed straight on the device. Cross-Platform Apps Flexibility comes at a premium price. iPhone App Development for Social Capital. iPad Application Development for Lamp Audit.

Why Should Users Download your eCommerce Mobile App to Buy your Products? ECommerce companies today are taking their mobile strategy a step ahead, by adopting mobile apps, to give their users a truly dedicated shopping experience. 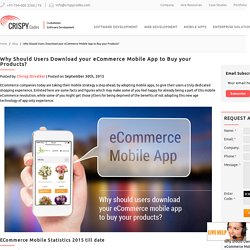 Enlisted here are some facts and figures which may make some of you feel happy for already being a part of this mobile eCommerce revolution, while some of you might get those jitters for being deprived of the benefits of not adopting this new age technology of app only experience. ECommerce Mobile Statistics 2015 till date ECommerce industry now, seems to have reached a point where websites (mobile responsive or not), are about to become obsolete. Specifically for the eCommerce market, it has become a trend for companies to move to an app only experience.

You can check out, Indian eCommerce giant Flipkart has already done it.