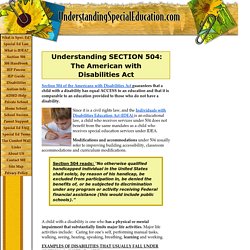 Since it is a civil rights law, and the Individuals with Disabilities Education Act (IDEA) is an educational law, a child who receives services under 504 does not benefit from the same mandates as a child who receives special education services under IDEA. Modifications and accommodations under 504 usually refer to improving building accessibility, classroom accommodations and curriculum modifications. Section 504 reads: “No otherwise qualified handicapped individual in the United States shall solely, by reason of his handicap, be excluded from participation in, be denied the benefits of, or be subjected to discrimination under any program or activity receiving Federal financial assistance (this would include public schools).” NEW! Section 504 - Civil Rights Law, Protection from Discrimination. Section 504 is a civil rights law that prohibits discrimination against individuals with disabilities. 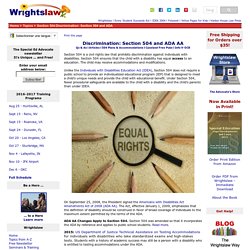 Section 504 ensures that the child with a disability has equal access to an education. The child may receive accommodations and modifications. Unlike the Individuals with Disabilities Education Act (IDEA), Section 504 does not require a public school to provide an individualized educational program (IEP) that is designed to meet a child's unique needs and provide the child with educational benefit. Fape.accoms. Much Ado About Grit? Interview with a Leading Psych Researcher. What is grit? 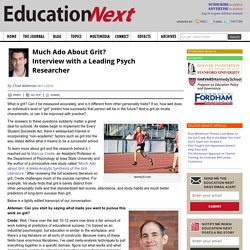 Can it be measured accurately, and is it different from other personality traits? If so, how well does an individual’s level of “grit” predict how successful that person will be in the future? And is grit an innate characteristic, or can it be improved with practice? Assuming Positive Intent. We're mad. 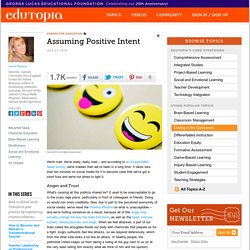 We're really, really mad -- and according to an Esquire/NBC News survey, we're madder than we’ve been in a long time. It takes less than ten minutes on social media for it to become clear that we've got a short fuse and we're not afraid to light it. Anger and Trust. Dialogue Defibrillators: Jump-Start Classroom Discussions! During a 12th-grade English discussion years ago, I asked a question that nobody answered. 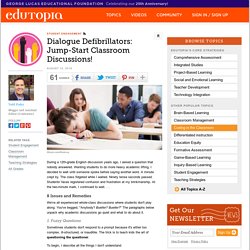 Wanting students to do more heavy academic lifting, I decided to wait until someone spoke before saying another word. A minute crept by. The class fidgeted while I waited. Ninety tense seconds passed. Students' faces registered confusion and frustration at my brinkmanship. Do No Harm: Flexible and Smart Grading Practices. My Edutopia post When Grading Harms Student Learning generated a lot of buzz. 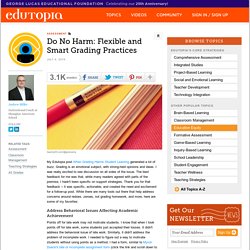 Grading is an emotional subject, with strong-held opinions and ideas. I was really excited to see discussion on all sides of the issue. The best feedback for me was that, while many readers agreed with parts of the premise, I hadn't been specific on support strategies. Thank you for that feedback -- it was specific, actionable, and created the need and excitement for a follow-up post. The 50 Best Smartphone Apps For Teachers Arranged By Category. Mobile phones managed to mostly kick their classroom stigma once the iPhone, Android, Blackberry, and other PDA-cellular hybrids (also known as “smartphones,” but you knew that already) popped onto the scene. 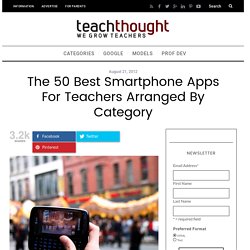 Thanks to the veritable Library of Alexandria of apps available on the respective markets, life can run that much smoother for professionals of all types. And that, of course, includes teachers. Is My School Ready? Strategies For Principals That Lead - Is My School Ready? 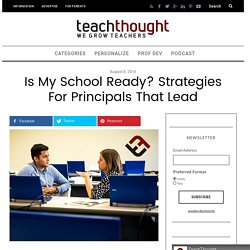 Strategies For Principals That Lead by Jen Schwanke, Principal for Dublin City Schools For a principal, the a new school year brings anticipation, excitement—and—let’s admit it—an underlying feeling of trepidation. I always look forward to this time of year, but with it comes the telltale butterflies in the stomach each time August rolls around. Whether you’re a veteran leader or just doing this for a first time, that feeling can leave you a bit unsettled.