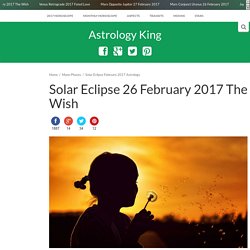 The solar eclipse February 2017 astrology is dominated by the spiritual planet Neptune to bring hope of a brighter future. Good fortune and lasting happiness come from the stars in this region of the sky. The February 2017 solar eclipse is just as happy and magical as the February 10 lunar eclipse. Acting in unison over coming months, this eclipse phase gives you an opportunity to turn your dreams into reality by drawing on your god given talents.

Practical Astrology for Witches and Pagans, by Ivo Dominguez, Jr: A Review. A Spell to Bind Donald Trump and All Those Who Abet Him: February 24th Mass Ritual. Grounding and Disposal Afterward, ground yourself by having a good, hearty laugh, jumping up and down, clapping your hands, stomping your feet, and having a bite to eat. 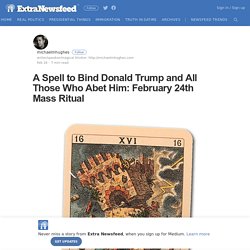 Grounding is very important—don’t neglect it. The Hekatean Banishing Rite of the Pentagram – V.K. Jehannum. Face the North. 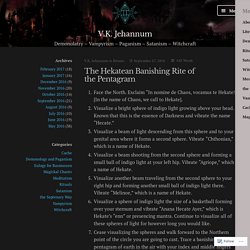 Exclaim “In nomine de Chaos, vocamus te Hekate!” [In the name of Chaos, we call to Hekate].Visualize a bright sphere of indigo light growing above your head. Known that this is the essence of Darkness and vibrate the name “Hecate.”Visualize a beam of light descending from this sphere and to your genital area where it forms a second sphere. Vibrate “Chthonian,” which is a name of Hekate.Visualize a beam shooting from the second sphere and forming a small ball of indigo light at your left hip. Vibrate “Agriope,” which is a name of Hekate.Visualize another beam traveling from the second sphere to your right hip and forming another small ball of indigo light there. Earthsea (universe) - Wikipedia. This article is about the fictional realm. 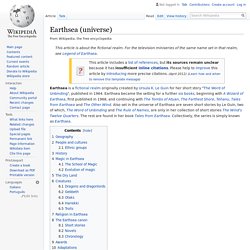 For the television miniseries of the same name set in that realm, see Legend of Earthsea. Earthsea is a fictional realm originally created by Ursula K. Le Guin for her short story "The Word of Unbinding", published in 1964. Earthsea became the setting for a further six books, beginning with A Wizard of Earthsea, first published in 1968, and continuing with The Tombs of Atuan, The Farthest Shore, Tehanu, Tales from Earthsea and The Other Wind. Also set in the universe of Earthsea are seven short stories by Le Guin, two of which, The Word of Unbinding and The Rule of Names, are only in her collection of short stories The Wind's Twelve Quarters.

Deity of the Week: Ereshkigal. "Kakka went down the long stairway of heaven. 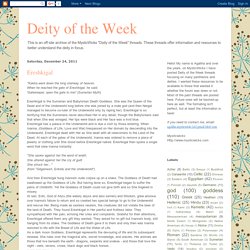 When he reached the gate of Ereshkigal, he said, 'Gatekeeper, open the gate to me! ' (Sumerian Myth) Earthsea (universe) - Wikipedia. SANTA MUERTE - PRAYER FOR THE DAY OF THE DEAD. Perchta - Wikipedia. Grimm says Perchta or Berchta was known "precisely in those Upper German regions where Holda leaves off, in Swabia, in Alsace, in Switzerland, in Bavaria and Austria. 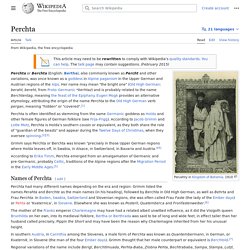 "[4] Mantra Ganesha 4 ° Om Vakratundaya Hum - ShekinahMerkaba. Illacertus. The 48 Laws of Power Animated SummaryPlaylist | 💪 In the last couple of months I've been spending hundreds of hours of my free time animating summaries of each chapter of The 48 Laws of Power written by the glorious Robert Greene. 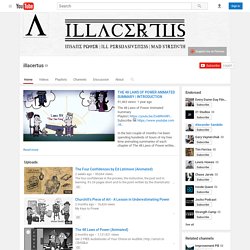 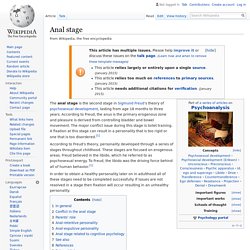 According to Freud, the anus is the primary erogenous zone and pleasure is derived from controlling bladder and bowel movement. The major conflict issue during this stage is toilet training. A fixation at this stage can result in a personality that is too rigid or one that is too disordered.[1] According to Freud’s theory, personality developed through a series of stages throughout childhood. These stages are focused on erogenous areas. Counterfeit money. Plated counterfeit of the Roman emperor Domitian. 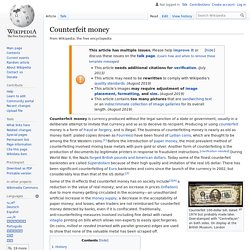 By using a copper core covered in a silver coating, the coin has a much lower intrinsic value, while face value remains the same. Anti counterfeit money sign and examples of counterfeit notes received by a noodle shop in Kunming, Yunnan, China. Counterfeit money is imitation currency produced without the legal sanction of the state or government. Capital (economics) - Wikipedia. How a capital good is maintained or returned to its pre-production state varies with the type of capital involved. 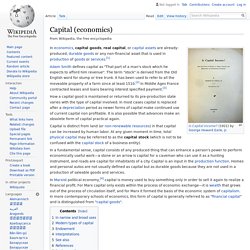 Nonzero: The Logic of Human Destiny - Wikipedia. Thesis[edit] The principal argument of Nonzero is to demonstrate that natural selection results in increasing complexity within the world and greater rewards for cooperation. Since, as Wright puts it, the realization of such prospects is dependent upon increased levels of globalization, communication, cooperation, and trust, what is thought of as human intelligence is really just a long step in an evolutionary process of organisms (as well as their networks and individual parts) getting better at processing information.[1] Through this lens, and an overview of human and global history, Wright typifies the argument against the views of noted paleontologist Stephen Jay Gould.

What is the prisoner's dilemma? definition and meaning - BusinessDictionary.com. Ariadne, Lady of the Labyrinth. Ariadne, Lady of the Labyrinth Ariadne, the consort of Dionysos, is as facinating an archetype as her wild lover. While in classical Greek myth she is the daughter of King Minos (and so in a Minoan context both a princess and a High Priestess of the Mysteries) her legend without doubt also preserves the myths of a very ancient goddess. As such she represents another important perspective on the dynamics of nature and our own psyches. In Classical Myth Ariadne fell in love with Theseus who had covertly travelled to Crete in order to slay the ‘Bull of Minos’, and liberate Greece from Minoan rule. The Minotaur was the offspring of the ‘Sea Bull’ (a son of Poseidon) by Minos’ Queen, this Sea Bull in fact was sometimes associated with Minos himself, who is also often regarded as the mortal incarnation of the underworld deity Zagreus.

Om Vakratundaya Hum Mantra - Ganesh Prayer to Remove Obstacles. Complete mantra lyrics in Sanskrit: ”Aum vakratundaya hum Aum vakratundaya hum Vakratundaya deemahi Ganesha Avatara namaha.” Ganesh Prayer to Remove Obstacles meaning: Choose A Shiva Mantra Which Will Benefit You. In the Hindu pantheon, Lord Shiva is the god of destruction, and a symbol of mercy. He is also very easily pleased. The Mantras that sing his praises and appeal to him may help improve your quality of life, and fill your days with happiness and contentment. Many Mantras are devoted to Lord Shiva and each Mantra has its own special set of benefits. We’re sure you have many questions, such as: Which Mantra is most applicable to me?