Talk about branching out! Builder who is obsessed with tree houses constructs his dream home among four northern red oaks 10 feet off the ground. The house is in Stoneham, Massachusetts, a small town about nine miles north of downtown BostonJosh Ring built it with his wife Cindy due to a childhood fascination with tree housesHouse is held up by wooden logs that are on concrete pillars By Dailymail.com Reporter Published: 19:29 GMT, 19 July 2015 | Updated: 22:04 GMT, 19 July 2015 Josh Ring has been obsessed with tree houses since he was a child. 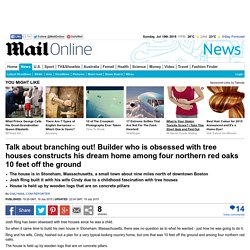 So when it came time to build his own house in Stoneham, Massachusetts, there was no question as to what he wanted - just how he was going to do it. Ring and his wife, Cindy, hashed out a plan for a very typical-looking country home, but one that was 10 feet off the ground and among four northern red oaks. The house is held up by wooden logs that are on concrete pillars. Scroll down for video The house is held up by wooden logs that are on concrete pillars and Ring said the house is secure so long as the trees remain healthy Yes, according to Ring, because trees grow from the top. The agony is over says Ethan's father after mum-on-run hands herself in: Couple will resume fight for custody before judge tomorrow. Rebecca Minnock went on the run with son Ethan Williams, 3, 17 days agoDisappearance followed two-year battle over custody with father Roger, 39 She handed herself in to police and Ethan has been re-united with fatherMs Minnock is not in custody and legal battle resumes in Bristol tomorrow By Mark Nicol In London For The Mail On Sunday Published: 21:13 GMT, 13 June 2015 | Updated: 22:32 GMT, 13 June 2015 The father of custody dispute boy Ethan Williams has been reunited with his son after on-the-run mother Rebecca Minnock handed herself in to police. 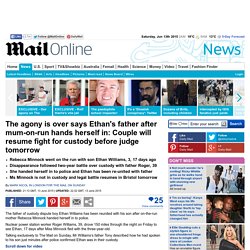 Nuclear power station worker Roger Williams, 39, drove 150 miles through the night on Friday to see Ethan, 17 days after Miss Minnock fled with the three-year-old. Talking exclusively to The Mail on Sunday, Mr Williams’s father Tony described how he had spoken to his son just minutes after police confirmed Ethan was in their custody. What REALLY lives on the hands of an eight-year-old: Microbiologist grows cultures found on her son’s palms. Tasha Sturm took print from her son after he had been playing outsideSturm says the white colonies are probably a form of StaphylococcusThey are usually harmless and live in about 30 per cent of people's nosesShe also captured an image of Bacillus - a common rod-shaped, bacteria By Ellie Zolfagharifard For Dailymail.com Published: 18:24 GMT, 9 June 2015 | Updated: 19:35 GMT, 9 June 2015 There’s a reason why we were told to always wash our hands before eating. 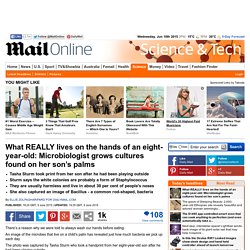 An image of the microbes that live on a child’s palm has revealed just how much bacteria we pick up each day. Beauty guru Nikkie demonstrates make-up's by transforming HALF of her face. Nikkie, 21, says people often question whether it's really her in her YouTube tutorials when they see her without make-upShe was inspired by an episode of RuPaul's Drag Race to glam up half of her face while leaving the other half make-up-freeIn the video, she gives a step by step guide to her make-up transformation By Carly Stern For Dailymail.com Published: 22:16 GMT, 9 June 2015 | Updated: 11:19 GMT, 10 June 2015 A make-up artist who claims that people are shocked to see her with and without make-up has set out to show others just how much of a difference cosmetics can make. 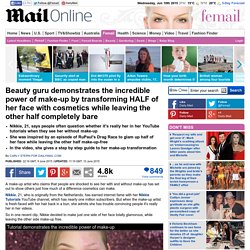 Nikkie, 21, who is originally from the Netherlands, has earned internet fame with her Nikkie Tutorials YouTube channel, which has nearly one million subscribers. But when the make-up artist is fresh-faced with her hair back in a bun, she admits she has trouble convincing people it's really her in her videos. Emerson High School renovations reveal students' chalkboard drawings from 1917. The historical treasures were uncovered tat Emerson High School in Oklahoma City last week while old chalkboards were being replacedChalkboards were found unchanged in classrooms throughout the school dating back to late November 1917Math lessons appear on the boards, as does music instruction, penmanship lessons and lessons on the Pilgrims By Josh Gardner For Dailymail.com Published: 14:15 GMT, 7 June 2015 | Updated: 16:02 GMT, 7 June 2015 Workers renovating an Oklahoma City high school last week were transported back nearly 100 years after uncovering chalkboards that have remained unchanged since Thanksgiving 1917. 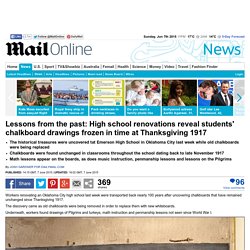 The discovery came as old chalkboards were being removed in order to replace them with new whiteboards. Underneath, workers found drawings of Pilgrims and turkeys, math instruction and penmanship lessons not seen since World War I. Crown Princess Mary is elegant in nautical navy and white with Princess Isabella. By Penelope Kilby for Daily Mail Australia Published: 00:04 GMT, 7 June 2015 | Updated: 11:58 GMT, 7 June 2015 She's affectionately stood by her mother, Crown Princess Mary of Denmark's side at many a royal engagement. 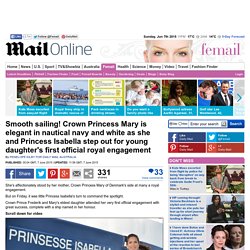 But on Friday, it was little Princess Isabella's turn to command the spotlight. Crown Prince Frederik and Mary's eldest daughter attended her very first official engagement with great success, complete with a ship named in her honour. Scroll down for video. Mother Nicky Webster falsely accused of abuse reveals her hunt for her babies. Nicky and Mark Webster's three children were removed by social servicesCouple accused of abuse and Family Court ruled they should be adoptedThey were exonerated in court case, but told they could not see childrenCouple are worried they will never see children again, now 11, 13 and 15 By Olga Craig for The Mail on Sunday Published: 21:06 GMT, 6 June 2015 | Updated: 10:46 GMT, 7 June 2015 Every time they leave their home in the Norfolk seaside town of Cromer, Nicky and Mark Webster anxiously scrutinise the passers-by. 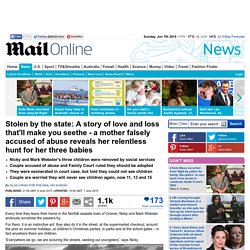 For them, it is an instinctive act: they also do it in the street, at the supermarket checkout, around the pool on summer holidays, at children's Christmas parties, in parks and at the school gates – in fact anywhere there are children. 'Everywhere we go, we are scouring the streets, seeking out youngsters,' says Nicky. Travers Beynon auditions blondes and brunettes at Gold Coast property. Controversial playboy Travers 'Candyman' Beynon 'casting' new models Bevy of blonde and brunette women 'audition' to join 'Candyshop Mansion'Casting call at Mr Beynon's $3.7million Gold Coast property on Sunday'The Candyman' is rumoured to be in talks to create a reality TV show By Liam Quinn For Daily Mail Australia Published: 10:04 GMT, 7 June 2015 | Updated: 15:02 GMT, 7 June 2015 A bevy of hopeful models have 'auditioned' to join notorious Queensland playboy Travers 'The Candyman' Beynon at his mansion after his girlfriend stormed out on him, as it is reported his grandiose antics could soon be immortalised by a reality television series. 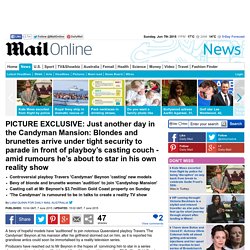 Producers have reached out to Mr Beynon in the hopes of convincing him to star in a series showcasing his ostentatious lifestyle and the wild parties at his sprawling $3.7million Gold Coast mansion, according to the Herald Sun. Daily Mail Australia contacted a network spokeswoman for confirmation of the rumoured programming plan. How Kate Middleton got perfect shots of Prince George and Princess Charlotte. Kate took the first official photographs of Princess Charlotte herselfAn amateur photographer, the Duchess put her camera skills to good useFEMAIL reveals how you can recreate the Royal family album shoot By Amy Lewis For Mailonline Published: 14:26 GMT, 7 June 2015 | Updated: 16:08 GMT, 7 June 2015 In a break from Royal protocol, the Duchess of Cambridge has taken Princess Charlotte's first official portraits herself - and released them on Twitter via the Kensington Palace account. 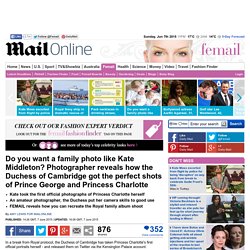 Warming the hearts of the nation, the series of pictures see a gorgeous Prince George proudly holding his tiny little sister, with beaming smiles for the camera. But just how did Kate get her pictures looking so professional? Scroll down for video. Anucha 'Cha' Saengchart turned into a social media star thanks to Lowcostcosplay.

Anucha 'Cha' Saengchart, 25, runs Facebook page Lowcostcosplay out of his home in BangkokHe has over 800,000 likes on Facebook for his low-budget recreations of popular characters from films and TV Anucha also encourages other people to send in images of their own failed cosplay attempts which prove just as popular with his fans By Valerie Siebert For Dailymail.com Published: 00:28 GMT, 6 June 2015 | Updated: 12:04 GMT, 6 June 2015 Cosplay is usually not an endeavor for the faint of heart, or the light of wallet. 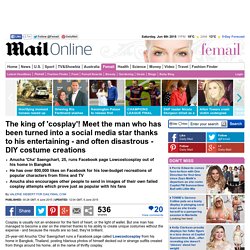 But one man has managed to become a star on the internet thanks to his ability to create unique costumes without the expense - and because the results are so bad, they're brilliant. 25-year-old Anucha 'Cha' Saengchart runs a Facebook page called Lowcostcosplay from his home in Bangkok, Thailand, posting hilarious photos of himself decked out in strange outfits created from things around his home, all in the name of thrifty cosplay. New York Sheriff's deputy Miguel Pimentel inundated with female attention. Deputy Miguel Pimentel's shirtless selfies have gone viral on social mediaWomen beg the officer to 'cuff them, arrest them or take them to jail'Others have even threatened to carry out a felony just to get his attention Pimental says that he has a girlfriend who he's been dating for two yearsBut he admits that he likes the attention as it is 'awesome' and 'positive' By Belinda Robinson For Dailymail.com Published: 15:54 GMT, 6 June 2015 | Updated: 19:36 GMT, 6 June 2015 A muscly New York City Sheriff's deputy has set pulses racing online after his selfies went viral on social media.

The photos set off an army of women fawning over Miguel Pimentel in his uniform. And many have even stepped forward to beg the deputy to use his police powers to 'cuff them, arrest them, take them to jail and frisk them all over.' 'I didn't give up acting. Acting gave me up': Goonies star Jeff Cohen reflects on life after his truffle-shuffling Chunk role ahead of the film's 30th anniversary. By Joanne Clements For Mailonline Published: 16:51 GMT, 5 June 2015 | Updated: 21:55 GMT, 5 June 2015 As Chunk in The Goonies he truffle-shuffled his way into movie history.

But while the cult '80s flick prepares to mark its 30th anniversary on Sunday, Jeff Cohen has revealed how losing his puppy fat was the end of his acting career. The former child star - who is now a successful entertainment lawyer - was forced to quit Hollywood for good when he could no longer put himself forward for the 'fat kid roles.' Scroll down for video. That's TWO generations of Jaggers on Jade's knee by SEBASTIAN SHAKESPEARE. By Sebastian Shakespeare for the Daily Mail Published: 00:11 GMT, 6 June 2015 | Updated: 12:07 GMT, 6 June 2015 You’d be forgiven for thinking the two tots bouncing on Jade Jagger’s knee are brother and sister.

But the cheeky toddlers are, in fact, uncle and niece, born only a month apart. Jade, Sir Mick’s daughter by first wife Bianca, gave birth to her third child, Ray (the one with blond hair), last summer. He is actually younger than his niece Ezra, who was born a few weeks earlier to Jade’s eldest daughter Assisi, 22.

Take the reading test that shows you what it’s like to be dyslexic. Font was created by Daniel Britton, a 25-year-old designer from KentUsing Helvetica as a base, the font removes 40% of the typeface's lines According to Britton, the typeface slows down someone reading it to the speed of someone with dyslexia reading a normal font By Ellie Zolfagharifard For Dailymail.com Published: 20:11 GMT, 5 June 2015 | Updated: 13:18 GMT, 6 June 2015 Ever since he can remember, Daniel Britton faced a daily battle at school.