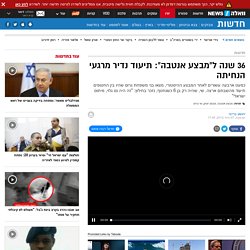 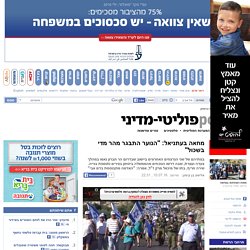 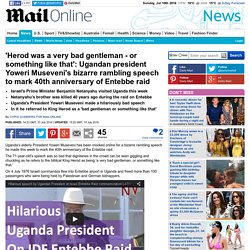 The 71-year-old's speech was so bad that dignitaries in the crowd can be seen giggling and chuckling as he refers to the biblical King Herod as being 'a very bad gentleman, or something like that.' On 4 July 1976 Israeli commandos flew into Entebbe airport in Uganda and freed more than 100 passengers who were being held by Palestinian and German kidnappers.

The audience were bemused as President Museveni (pictured) rambled on about King Herod and the Balfour Declaration, repeatedly using the phrase 'or something like that' The brother of Israel's Prime Minister Benjamin Netanyahu was the only commando killed in the raid but dozens of Ugandan soldiers, loyal to the then dictator Idi Amin, were killed. Netanyahu listened attentively as President Museveni began his speech, which appeared badly researched and largely incoherent. Time-lapse video shows the stars above the African desert during a rare thunderstorm  This spectacular time-lapse footage of the night's sky is enough to leave anyone starry-eyed. 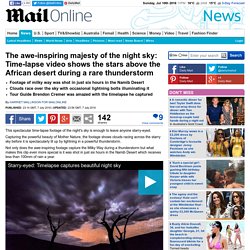 Capturing the powerful beauty of Mother Nature, the footage shows clouds racing across the starry sky before it is spectacularly lit up by lightning in a powerful thunderstorm. Not only does the awe-inspiring footage capture the Milky Way during a thunderstorm but what makes this clip even more special is it was shot in just six hours in the Namib Desert which receives less than 100mm of rain a year. Clever video details ten genius household hacks guaranteed to save you money. You'll be hard-pressed to find a person who isn't looking to save time and money, and a new round of brilliant household hacks proves that the answers to your domestic woes may have been hiding in your house the entire time. 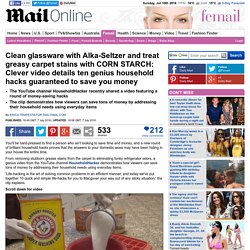 From removing stubborn grease stains from the carpet to eliminating funky refrigerator odors, a genius video from the YouTube channel HouseholdHacker demonstrates how viewers can save tons of money by addressing their household needs using everyday items. 'Life-hacking is the art of solving common problems in an efficient manner, and today we've put together 10 quick and simple life-hacks for you to Macgyver your way out of any sticky situation,' the clip explains. Scroll down for video DIY dishwasher tablets: Instead of buying prepackaged dishwasher tablets, make your own by combining washing soda, baking soda, salt, and lemon juice in a bowl Pack the mixture into ice cube trays and place in the freezer until each tab is frozen solid.

Stunning new Hubble image reveals the 'beating heart' of the crab nebula  Crab Nebula lies 6500 light-years away in the constellation of TaurusExtraordinary view of the nebula is one that has never been seen beforeAt centre of the Crab Nebula lies what remains of the core of original star By Mark Prigg For Dailymail.com Published: 17:54 GMT, 7 July 2016 | Updated: 18:25 GMT, 7 July 2016 It is s stunning look inside one of the most incredible sights in the universe. 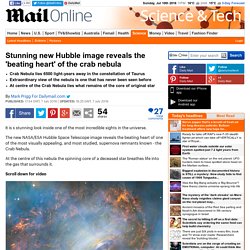 Atmospheric video shows what lightning really looks like when it flashes across the sky. A few ripples show in the sky before the atmosphere is totally changed and huge bolts of lightning flashSpectacular scene offered some late-night entertainment for residents in Ashburn, VirginiaLightning primarily occurs when warm air is mixed with colder air masses, with clouds becoming highly charged By John Hutchinson for MailOnline Published: 17:05 GMT, 7 July 2016 | Updated: 07:54 GMT, 8 July 2016. 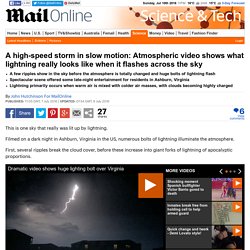 Palestinian kills Israeli girl, 13, sleeping in her bedroom. By Associated Press Published: 23:14 GMT, 30 June 2016 | Updated: 23:15 GMT, 30 June 2016 JERUSALEM (AP) — A Palestinian youth sneaked into a fortified Jewish settlement in the West Bank on Thursday, broke into a home and stabbed to death a 13-year-old Israeli-American girl as she slept in bed before frantic security guards arrived and killed him. 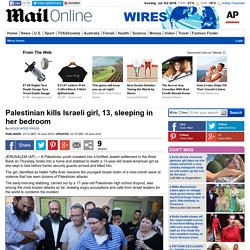 The girl, identified as Hallel Yaffa Ariel, became the youngest Israeli victim of a nine-month wave of violence that has seen dozens of Palestinian attacks. The early-morning stabbing, carried out by a 17-year-old Palestinian high school dropout, was among the most brazen attacks so far, drawing angry accusations and calls from Israeli leaders for the world to condemn the incident. Rina Ariel touches the body of her slain 13 year old daughter Hallel during her funeral inside a Jewish settlement of Kiryat Arba, West Bank, Thursday, June 30, 2016.

Israeli girl Hallel Yaffa Ariel stabbed to death in West Bank home 'by a Palestinian' A Palestinian attacker fatally stabbed a 13-year-old girl in her home in a Jewish settlement in the West Bank today before being shot dead by security guards, the Israeli army said. 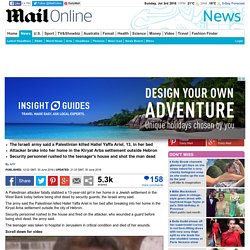 The army said the Palestinian killed Hallel Yaffa Ariel in her bed after breaking into her home in the Kiryat Arba settlement outside the city of Hebron. Security personnel rushed to the house and fired on the attacker, who wounded a guard before being shot dead, the army said. Palestinian kills US-Israeli girl in West Bank home. By Afp Published: 20:07 GMT, 30 June 2016 | Updated: 20:08 GMT, 30 June 2016 A Palestinian attacker fatally stabbed a US-Israeli teenager in her home at a Jewish settlement in the West Bank before being shot dead by security guards on Thursday. 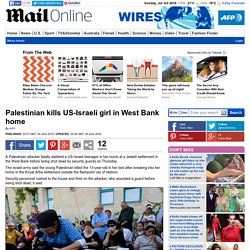 The Israeli army said the young Palestinian killed the 13-year-old in her bed after breaking into her home in the Kiryat Arba settlement outside the flashpoint city of Hebron. Security personnel rushed to the house and fired on the attacker, who wounded a guard before being shot dead, it said. Girl, 13, Stabbed to Death in West Bank as She Slept Was US National, Officials Say. A 13-year-old U.S. national was stabbed to death, as she slept, by a 17-year-old Palestinian in a West Bank settlement in what officials were describing as an "outrageous terrorist attack," according to the U.S. State Department. The teen, identified by the State Department as Hallel Ariel, was killed Thursday after the Palestinian youth broke into her home in a West Bank settlement, said U.S. State Department spokesman John Kirby.

Israeli girl Hallel Yaffa Ariel stabbed to death in her West Bank bedroom was US citizen. The 13-year-old girl who was stabbed to death in her West Bank home by a Palestinian man was a US citizen, it has been revealed. The Israeli army said Hallel Yaffa Ariel was in her bed when a man broke into her home Thursday in the Kiryat Arba settlement outside the city of Hebron.

The most famous cities around the world have been photographed an infinite number of times but they've never been captured quite like this. Russian photography group AirPano have taken stunning nighttime panoramic and 360-degree aerial images of many well-known destinations. So far, their work has included modern constructions in Singapore, Shanghai and Dubai as well as the traditional architecture in Lisbon, Moscow and Rome.

Piers Morgan's Killer Women show leaves viewers in tears. The shocking moment a seven-year-old boy gave evidence that he'd seen his mother drowning his sister, which led to her being jailed for life, has left viewers in tears. The case of Amanda Lewis, 35, was featured in Piers Morgan's new ITV show Killer Women, which aired last night. Mail Online's US editor-at-large spent an hour interviewing the Florida mother who still denies deliberately drowning her seven-year-old daughter Adrianna in the pool at their home. And viewers took to Twitter to say they were 'heartbroken' and in tears as they saw AJ break down while giving evidence against his mother in court.

Scroll down for video. Weather forecaster chases deadly storms through Tornado Alley. These stunning images of storms were all captured by one daring photographer who chases tornadoes and lightening strikes for hundreds of miles in order to catch a photo of them in America. Some of the storms pictured are supercell storms in which a huge vortex is formed and are considered the most dangerous in the world. The strong rotating updraft makes them exceptionally powerful and devastating. The storms were snapped by amateur photographer Marko Korosec, 34, who spends weeks in and around the renowned 'Tornado Alley'.

Scroll down for video Brave work: These stunning images of storms were all captured by one daring photographer who chases tornadoes and lightening strikes for hundreds of miles in order to capture them. Amanda Wright who witnessed her mother's murder at four years old relives the moment. A woman who witnessed her mother's brutal murder when she was just four years old has relived her ordeal in a new book. Amanda Wright, now 41, from Stevenage, Hertfordshire, was in bed with mum Susan Lowson on March 4th, 1980, when Lowson was strangled to death by family friend John Dickinson. He then tried to do the same to Amanda before laying their lifeless bodies on the bed and setting fire to the house in an attempt to conceal the crime. Bus Driver Gets Strange Feeling About A Child Passenger, Then Looks Down At His Feet And Sees It. Fortune cookies from Japan get a makeover and you'll find an adorable cat inside

United Airlines pilot secretly captains his sons redeployment flight back from Kuwait. A clever father, who is a Washington D.C. -based pilot, pulled off the surprise of a lifetime on board one of his flights this month. Eerie photographs of a house being reclaimed by desert sand capture the unstoppable march of time. The ultimate app for the window seat. The ultimate app for the window seat. Victorian paramedic Pete Keach lost son to SIDS on emergency callout to own home. Paramedic Pete Keach, 36, was attending an emergency an hour away from home when an emergency call came through the system that would change his life forever. Christine Thi Woo takes a trip to McDonalds and is found dead in her car with kids alive. From China's highway on water to the world's longest tunnel: The most bizarre and thrilling driving roads on earth revealed. Driving from A to B can sometimes be a monotonous task - but occasionally there is a road that makes the journey much more exciting than the destination.

Take the nail-biting, aply-named Death Road in Bolivia, for example, which has no guard rails and steep cliffs of up to 1,968 feet high. Or the world's longest road tunnel, the Laerdal Tunnel in Norway, which sees drivers plunged underground for a whopping 15.2 miles. Three missing Georgia children feared kidnapped by their mother in a 'stolen vehicle'

Ynet על הכוונת: קונטאר חוסל, מי הבא בתור? These magical igloos will make pack your bags and head for the snow. Why there's more to Seattle than Starbucks. Princess Mary's son saved on the Gold Coast by shocked lifeguard. Hezbollah commander Samir Kantar killed in Syria after Israeli airstrike. Family of 7 siblings reunites for the first time after being put up for adoption. Paris attack picture from inside Bataclan reveals aftermath of shooting. United in the face of fear: Thousands turn out across Paris to lay floral tributes and pay their respects to victims of terror attacks as country comes to terms with deadliest attack in Europe in a decade. Hero of La Belle Equipe: The Frenchman who died throwing himself in front of bullet to save a woman's life in the massacre. Christina Borchardt wins Halloween with Rocket Raccoon costume for her son. Muslim Ethiopian Airlines passenger tries to kill Jewish man while urging others to lynch him.

Polish man in Calais heading to UK raped and killed girl he snatched from playgorund. US woman reveals how ski accident left her with phenomenally-advanced mental abilities.