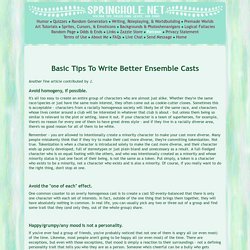 Avoid homogeny, if possible. It's all too easy to create an entire group of characters who are almost just alike. Whether they're the same race/species or just have the same main interest, they often come out as cookie-cutter clones. Sometimes this is acceptable - characters from a racially homogenous society will likely be of the same race, and characters whose lives center around a club will be interested in whatever that club is about - but unless them being so similar is relevant to the plot or setting, leave it out. If your character is a team of superheroes, for example, there's no reason for every one of them to have great dress style - and if they live in a racially diverse area, there's no good reason for all of them to be white.

Remember - you are allowed to intentionally create a minority character to make your cast more diverse. Avoid the "one of each" effect. Happy/grumpy/any mood is not a personality. Leave out The Tagalong. Create and Write Better Non-Protagonist Characters (NPCs) For the purpose of this article, the term “NPC” and “PC” shall refer to “non-protagonist character” and “protagonist character,” respectively. 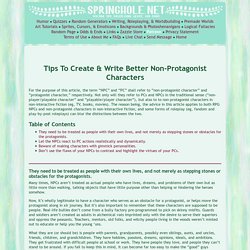 Not only will they refer to PCs and NPCs in the traditional sense (“non-player/playable character” and “playable/player character”), but also to to non-protagonist characters in non-interactive fiction (eg, TV, books, movies). The reason being, the advice in this article applies to both RPG NPCs and non-protagonist characters in non-interactive fiction, and some forms of roleplay (eg, fandom and play-by-post roleplays) can blur the distinctions between the two.

They need to be treated as people with their own lives, and not merely as stepping stones or obstacles for the protagonists. Many times, NPCs aren’t treated as actual people who have lives, dreams, and problems of their own but as little more than walking, talking objects that have little purpose other than helping or hindering the heroes somehow. Handling a Cast of Thousands-Part III. By Will Greenway Congratulations: you qualify as legitimate glutton for punishment! 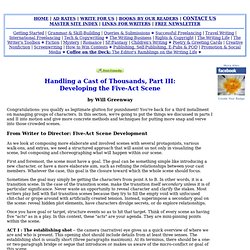 You're back for a third installment on managing groups of characters. In this section, we're going to put the things we discussed in parts I and II into motion and give more concrete methods and techniques for putting more snap and verve into those crowded scenes. From Writer to Director: Five-Act Scene Development As we look at composing more elaborate and involved scenes with several protagonists, various walk-ons, and extras, we need a structured approach that will assist us not only in visualizing the scene, but composing and choreographing what will happen within our scene. First and foremost, the scene must have a goal. Sometimes the goal may simply be getting the characters from point A to B. Once you have goal or target, structure events so as to hit that target. ACT I : The establishing shot -- the camera (narrative) eye gives us a quick overview of where we are and who is present.

Handling a Cast of Thousands-Part I. By Will Greenway Few writing challenges are greater than doing justice to a large cast of characters in a novel or story. In fact, the difference between simply doing them justice and handling them well is a significant level of effort in itself. Sadly, this is one of those writer conundrums that is often best resolved with a "Don't do that if it hurts" solution. 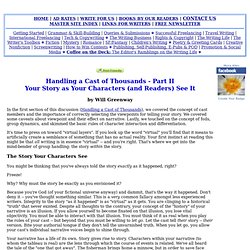 We covered some caveats about viewpoint and their effect on narrative. Lastly, we touched on the concept of foils, group dynamics, and skimmed the basic rules of character interaction and differentiation. It's time to press on toward "virtual layers". If you look up the word "virtual" you'll find that it means to artificially create a semblance of something that has no actual reality. The Story Your Characters See You might be thinking that you've always told the story exactly as it happened, right?

Freeze! Why? Because you're God (of your fictional universe anyway) and dammit, that's the way it happened. Your narrative has a life of its own. Like the empty-handed fisherman, your characters have ego and motivation to tell the story as THEY see fit. Adding Layers Past: Present: Future: Avoid Overactive or Inactive Supporting Characters. One of the most common plot problems writers face is mistaking minor characters and subplots for the main character and primary plot. 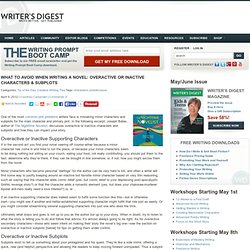 In the following excerpt, Joseph Bates, author of The Nighttime Novelist, discusses overactive or inactive characters and subplots and how they can impact your story. Overactive or Inactive Supporting Characters If in the second act you find your novel veering off course either because a minor character has come in and tried to run the place, or because your minor characters seem to be doing nothing but sitting on your couch, eating your food, not really contributing, you should put them to the test: determine why they’re there, if they can be brought in line somehow, or, if not, how you might excise them from the novel. If an inactive supporting character does indeed seem to fulfill some function like this—but is otherwise inert—you might see if another and better-established supporting character might fulfill that role just as easily. Unforgettable Support Characters.