How to Transcend Astrological Influences, by Paramhansa Yogananda. I found this on the Ananda website. 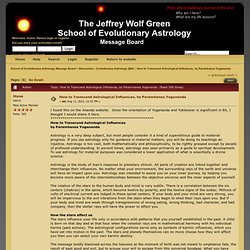 Astrology is the study of man’s response to planetary stimuli. The relation of the stars to the human body and mind is very subtle. How the stars affect usThe stars influence your life only in accordance with patterns that you yourself established in the past. Astrology glyphs: Astrological symbols - Planetary symbols. How to read your Birth Chart - A Key to the Symbols.

The language of astrology is a symbolic one, and it has its own alphabet! 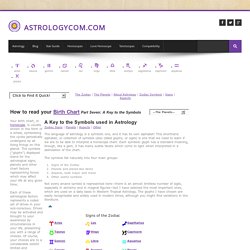 This shorthand alphabet, or collection of symbols (also called glyphs, or sigils) is one that we need to learn if we are to be able to interpret a horoscope chart. Each symbolic glyph has a standard meaning, though, like a gem, it has many subtle facets which come to light when interpreted in a delineation of the chart. The symbols fall naturally into four main groups: Signs of the ZodiacPlanets and planet-like itemsAspects, both major and minorOther useful symbols Not every arcane symbol is represented here—there is an almost limitless number of sigils, especially in alchemy and in magical figures—but I have selected the most important ones, which are used on a daily basis in Western Tropical Astrology. 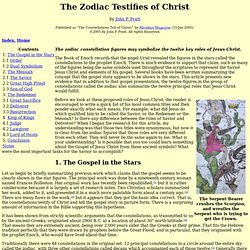 Pratt Published as "The Constellations Tell of Christ," by Meridian Magazine (15 Jun 2005). ©2005 by John P. Pratt. All rights Reserved. Index,Home The zodiac constellation figures may symbolize the twelve key roles of Jesus Christ. The Book of Enoch records that the angel Uriel revealed the figures in the stars called the constellations to the prophet Enoch.

Before we look at these proposed roles of Jesus Christ, the reader is encouraged to write a quick list of his most common titles and then ponder exactly what each means. 1. Let us begin by briefly summarizing previous work which claims that the gospel seems to be clearly shown in the star figures. It has been shown from strictly scientific arguments that the constellations, as transmitted to us by the ancient Greeks, originated about 2900 B.C. at a location of about 30° north latitude.[4] That means they are extremely ancient, being over 2,000 years older that the Greeks at their prime. Chinese Astrology, Chinese Zodiac, Horoscopes, Year of the Rabbit. The Dog Personality Of all the signs the Dog symbolizes honor and justice. 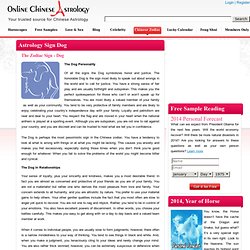 The honorable Dog is the sign most likely to speak out about wrongs in the world and to call for justice. You have a strong sense of fair play and are usually forthright and outspoken. This makes you the perfect spokesperson for those who can’t or won’t speak up for themselves. You are most likely a valued member of your family as well as your community. Taoism and the Arts of China (Art Institute of Chicago) Birthchart Calculator. What's your sign? Discover the world of signs and symbolic meanings. Astrology & the Chakras. In this article I would like to explore the exciting possibility of bridging two of history's greatest psychological systems -- astrology and the chakras. 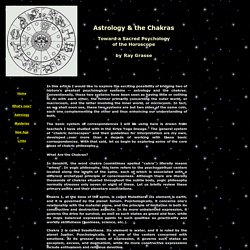 Conventionally, these two systems have been seen as having little or nothing to do with each other, the former primarily concerning the outer world, or macrocosm, and the latter involving the inner world, or microcosm. In fact, as we shall soon see, these two systems are but two sides of the same coin, each one complementing the other and thus enhancing our understanding of both. The basic system of correspondences I will be using here is drawn from teachers I have studied with in the Kriya Yoga lineage.1 The general system of "chakric horoscopes" and their guidelines for interpretation are my own, developed over more than a decade of working with these basic correspondences. With that said, let us begin by exploring some of the core ideas of chakric philosophy. 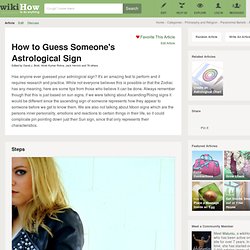 It's an amazing feat to perform and it requires research and practice. While not everyone believes this is possible or that the Zodiac has any meaning, here are some tips from those who believe it can be done. Ad Steps 1Look for people with strong personalities. 9Predict a person's two basic signs: 1) monthly sign such as Aries, Taurus, Gemini etc, and 2) yearly sign such as boar, rat, ox etc. Tips Fire signs are easy to recognize but sometimes difficult to tell apart. Warnings Everyone has different birth charts, so not everyone looks and acts in accordance to their birth signs. Astrology Signs - Explore The Star Signs & Compatibility. Astrology, Astrological Horoscopes, Love Signs, Relationships, Astrology Signs, Compatibility, Love Match by Tonio. Astrology.com - Horoscopes, Tarot, Psychic Readings.