Speaker Enclosure Volume Calculator. DIY Speaker Projects; "Free Speaker Box Plans - Build a Speaker box -Save $$!" Google Image Result for. Google Image Result for. BeastBoxes Boast Better Bass For Your Buck, Baby! - News - Talk Audio Online Car Audio Magazine & Forum - Talk Audio Online Car Audio Magazine & Forum - Magazine. There are in technical terms, one absolute shed-load of speaker box design programs out there and there are even a few folks who can use them and actually understand what in hell they do. 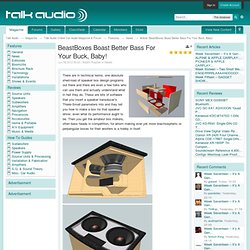 These are bits of software that you insert a speaker transducer’s Thiele-Small parameters into and they tell you how to make a box for that speaker driver, even what its performance aught to be. Then you get the amateur box makers, often bass heads in competition, for whom making ever yet more brachiospheric or perpangular boxes for their woofers is a hobby in itself. But most of us simply want to get the best out of our woofers and are not likely to spend time competing. And while a factory made box is cute and sexy with the embroidery upon it, they usually restrict the choice of woofing beast you use – your sub itself. And yet, there is the issue of that box… 国外全频喇叭技术规格 - 『中国Lowther俱乐部』 - 『各地胆友俱乐部』 - 胆艺轩[Tubebbs]论坛集群 音响. Lenard Audio, Opals. Questions are often asked about valve amplifier class Push pull Single ended A AB B Single ended refers to the 1 single output valve in small cheap radios and radiograms that were made before 1960. 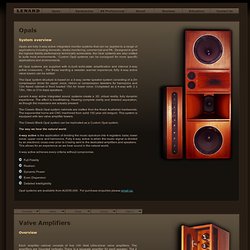 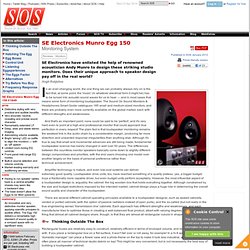 Does their unique approach to speaker design pay off in the real world? Hugh Robjohns In an ever-changing world, the one thing we can probably always rely on is the fact that, at some point, the 'music' (in whatever electrical form it might be) has to be turned into acoustic sound waves for us to hear — and in most cases that means some form of monitoring loudspeaker. The Sound On Sound Monitors & Headphones Smart Guide catalogues 185 small and medium-sized monitors, and there are probably even more currently available on the global market, each with different strengths and weaknesses. 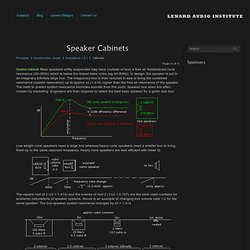 Bass speakers softly suspended may have (outside of box) a free air fundamental cone resonance (20-35Hz) which is below the lowest bass notes (eg 40-50Hz). In design, the speaker is put in an imaginary infinitely large box. The imagionary box is then reduced in size to bring the combined resonance (system resonance) up to approx v2 (1.414) higher than the free air resonance of the speaker. The math to predict system resonance becomes acurate from this point. Low weight cone speakers need a large box whereas heavy cone speakers need a smaller box to bring them up to the same resonant frequency. The square root of 2 (v2 = 1.414) and the inverse of root 2 (1/v2 = 0.707) are the most used numbers for academic calculations of speaker systems. Is this the right idea of a T line? - Subwoofers / Enclosures - SMD Forum. SOME PROPOSED SINGLE-DRIVER SPEAKERS. I've been doing some studying of the currently favored horns, and TQWT,s and such; and come to a suspicion that there's a problem that afflicts most folded horns and tubes; that they're really nowhere near their theoretical optimum shape, but a very loose polygonal approximation. 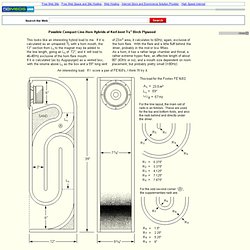 I feel it very worthwhile, if we're going to construct horn and pipe loads for drivers, to trouble ourselves to make them smooth, nicely folded (if they're folded), and if they're horns, dimensionally rigorous. The problem with the advanced loadings is that it seems like everybody's trying to see how poorly they can be constructed and still work. Why? Speaker Enclosure Volume Calculator. DIY Speaker Projects; "Free Speaker Box Plans - Build a Speaker box -Save $$!" How Speakers Work. The speakers are powered by entering current and voltage:Pin = V i **All speakers use amplifiers to add more current to the signal to produce louder sound **i is a function of time, i(t), whose average value is its maximum amplitude divided by the square root of two The constant magnetic field acting on this current produces a force on the voice coil:F = i x B (where i and B are vectors) The force accelerates the voice coil and the power is converted to mechanical power:F = m a = m dvc/dtP = F vc The coils vibrate the cone, which produces a pressure wave that carries the acoustic power:F = p APout = vw A Dp or, another way of looking at the power exiting the system is:Pout = Pin - Ploss = hPin **This is from the definition for efficiency AMPLIFIERS Amplifiers are needed to boost the current source because the current originally carrying the signal is too weak to render audible sound. 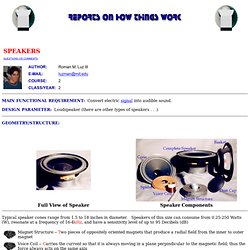 Subwoofer. A 12" subwoofer driver without an enclosure Subwoofers are made up of one or more woofers mounted in a loudspeaker enclosure—often made of wood—capable of withstanding air pressure while resisting deformation. 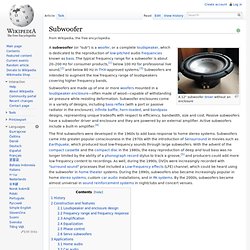 Subwoofer enclosures come in a variety of designs, including bass reflex (with a port or passive radiator in the enclosure), infinite baffle, horn-loaded, and bandpass designs, representing unique tradeoffs with respect to efficiency, bandwidth, size and cost. Passive subwoofers have a subwoofer driver and enclosure and they are powered by an external amplifier. Active subwoofers include a built-in amplifier.[4] History[edit] One of the first subwoofers was developed during the late 1960s by Ken Kreisel, the former president of the Miller & Kreisel Sound Corporation in Los Angeles.