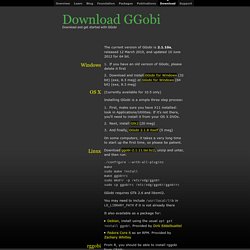 Windows If you have an old version of GGobi, please delete it first Download and install GGobi for Windows (32 bit) (exe, 8.3 meg) or GGobi for Windows (64 bit) (exe, 8.3 meg) (Currently available for 10.5 only) Installing GGobi is a simple three step process: First, make sure you have X11 installed: look in Applications/Utilities. On some computers, it takes a very long time to start up the first time, so please be patient.

Linux Download ggobi-2.1.11.tar.bz2, unzip and untar, and then run: . GGobi requires GTk 2.6 and libxml2. You may need to include /usr/local/lib in LD_LIBRARY_PATH if it is not already there It also available as a package for: rggobi From R, you should be able to install rggobi from CRAN: install.packages("rggobi") It usually takes about a week after the release of GGobi for rggobi to be available Development Please follow the developer's install guide to build it from source. Digging Deeper into Lean Business Model Canvases. I’m a big fan of Ash Maurya’s Lean Canvas. 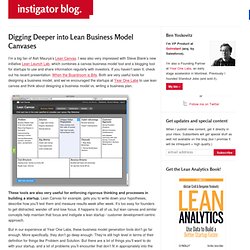 I was also very impressed with Steve Blank’s new initiative Lean Launch Lab, which combines a canvas business model tool and a blogging tool for startups to use and share information regularly with investors. If you haven’t seen it, check out his recent presentation: When the Boardroom is Bits. Both are very useful tools for designing a business model, and we’ve encouraged the startups at Year One Labs to use lean canvas and think about designing a business model vs. writing a business plan. These tools are also very useful for enforcing rigorous thinking and processes in building a startup. Lean Canvas for example, gets you to write down your hypotheses, describe how you’ll test them and measure results week after week. Lean Canvas: Your Startup Blueprint. Lessons Learned. Jps. CUDA, Supercomputing for the Masses: Part 1. 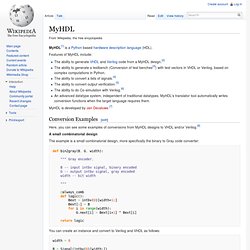 MyHDL's translator tool automatically writes conversion functions when the target language requires them. MyHDL is developed by Jan Decaluwe.[7] Conversion Examples[edit] Here, you can see some examples of conversions from MyHDL designs to VHDL and/or Verilog.[8] A small combinatorial design. Sousveillance Culture panel at Conflux 2007. Python. 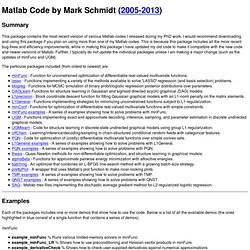 I would recommend downloading and using this package if you plan on using more than one of my Matlab codes. This is because this package includes all the more recent bug-fixes and efficiency-improvements, while in making this package I have updated my old code to make it compatible with the new code and newer versions of Matlab. Further, I typically do not update the individual packages unless I am making a major change (such as the updates of minFunc and UGM).

The particular packages included (from oldest to newest) are: 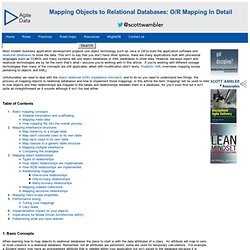 This isn’t to say that you don’t have other options, there are many applications built with procedural languages such as COBOL and many systems will use object databases or XML databases to store data. However, because object and relational technologies are by far the norm that’s what I assume you’re working with in this article. If you’re working with different storage technologies then many of the concepts are still applicable, albeit with modification (don’t worry, Realistic XML overviews mapping issues pertaining to objects and XML). Table of Contents 1. When learning how to map objects to relational databases the place to start is with the data attributes of a class. It can make it easier to think that classes map to tables, and in a way they do, but not always directly. For now, let’s keep things simple.