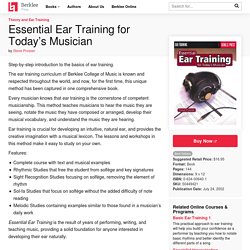 The ear training curriculum of Berklee College of Music is known and respected throughout the world, and now, for the first time, this unique method has been captured in one comprehensive book. Every musician knows that ear training is the cornerstone of competent musicianship. This method teaches musicians to hear the music they are seeing, notate the music they have composed or arranged, develop their musical vocabulary, and understand the music they are hearing. Ear training is crucial for developing an intuitive, natural ear, and provides the creative imagination with a musical lexicon. The lessons and workshops in this method make it easy to study on your own. Features: Essential Ear Training is the result of years of performing, writing, and teaching music, providing a solid foundation for anyone interested in developing their ear naturally. 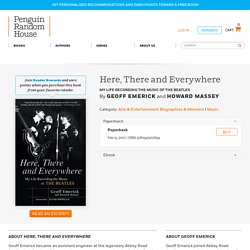 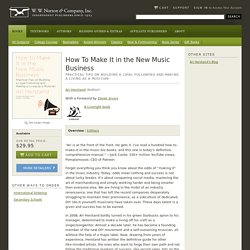 He gets it. Forget everything you think you know about the odds of “making it” in the music industry. In 2008, Ari Herstand boldly turned in his green Starbucks apron to his manager, determined to make a living off his craft as a singer/songwriter. Build a grass-roots fan base—and understand the modern fanBook a profitable tour, and tips for playing live, such as opening vs. headlining etiquette, and putting on a memorable showBecome popular on YouTube, Spotify and SoundCloudGet songs placed in film and televisionEarn royalties you didn’t know existed and reach your crowdfunding goals Musicians will not only be introduced to all the tools available today but will be shown how to effectively leverage them to actually make money. 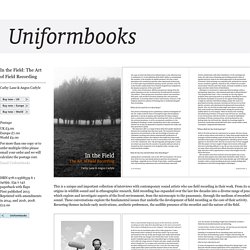 Email Uniformbooks. Mixing with Impact: Learning to Make Musical Choices. Reviews "Every now and then an indispensable book comes along that can profoundly influence you in the development of your audio skills – this might be one of them. 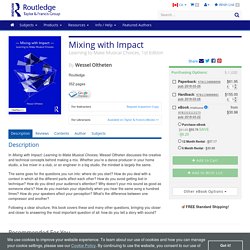 " David Baer, Sound Bytes "The usual topics of effects, compression, and EQ are covered but in more realistic, hands-on detail than most vague mixing guides usually are fluffed up with. Special attention is given early on to the importance of phase, space, and time and how all these interrelate. One of the best features of this book is that Wessel doesn’t generally hand out specific names of hardware or plug-ins to use but instead educates the user about actual techniques, what type of gear will achieve the desired goals, and why it works. Musiconomie. Zelfstandig ondernemen voor musici en artiesten. Perfecting Sound Forever. The story of recorded music. ‘[A] superbly researched book ... an absorbing historical narrative, travelling from Thomas Edison's tours with the first phonograph, through the breakthrough of magnetic tape and on into the iPod age’ Tim Bowden ‘Perfecting Sound Forever portrays the history of recordings as a series of battles between quality and commercial expediency ... 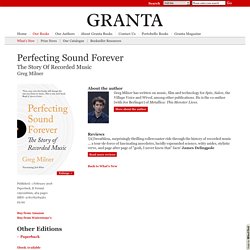 [Milner] has a relish for technical details ... He writes interestingly about high-tech tricks such as the loss of dynamic range in modern recordings in order emphasise loudness’ Ludovic Hunter-Tilney ‘A compelling and thoroughly rewarding read for any music freak fascinated by the recording and manipulation of sound ... [Milner] covers a phenomenal number of seismic shifts in our sonic landscape’ Sharon O’Connell. Radio Revolten. 30 days of radio art. Leading art institutions such as Tate Modern, the São Paulo Biennial, and Documenta have now recognized that an ongoing artistic use of the airwaves has generated an autonomous genre called radio art. 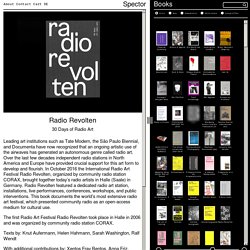 Regeneration Songs: Sounds of Investment and Loss from East London. The impact of global capital and foreign investment on local communities is being felt in major cities across the world. 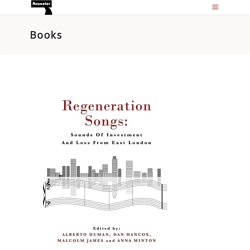 Since the 2012 Olympics was awarded to the British capital, East London has been at the heart of the largest and most all-encompassing top-down urban regeneration strategy in civic history. At the centre of this has been the local government, Newham Council, and their daring proposal: an “Arc of Opportunity” for developers to transform 1,412 hectares of Newham. 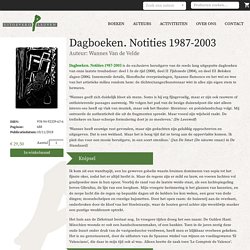