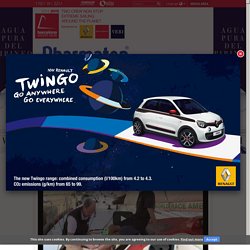 This initiative has been brought to life thanks to an agreement signed in April 2013 by the three institutions, establishing a commitment to collaborate, disseminate knowledge of, and boost the educational and training potential of the BWR. Available on Instructure Canvas platform from November 2014, these courses will be free and open to all and offer certification from the University of Barcelona in association with experts in online learning. The Barcelona World Race Ocean Campus courses fall under the 'MOOC' category: Massive Online Open Courses. The initiative sets a double precedent Strategies for winning. Water structure and science: Site map. '...of all known liquids, water is probably the most studied and least understood.”' Introduction The water molecule Water Water structure, Introduction Water structure, advanced. 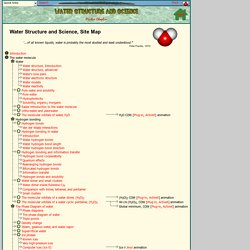 The structure of water. This work is licensed under a Creative Commons Attribution-NonCommercial-ShareAlike 2.5 License. 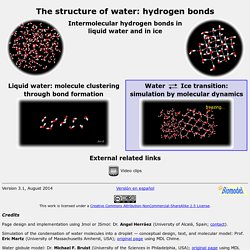 Credits Page design and implementation using Jmol or JSmol: Dr. Thermodynamic Equation of SeaWater TEOS-10. Methods of Determination of Salinity. Determination of salinity, as the total measure of inorganic dissolved matter, is by evaporation of the water and weighing of the residue. 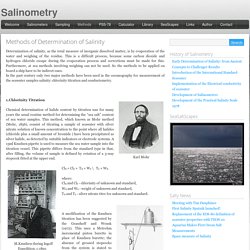 This is a difficult process, because some carbon dioxide and hydrogen chloride escape during the evaporation process and corrections must be made for this. Furthermore, at sea methods involving weighing can not be used. So the methods to be applied on board a ship have to be indirect ones. Overview / Copernicus. Overview Sentinel family ESA is developing a new family of missions called Sentinels specifically for the operational needs of the Copernicus programme. 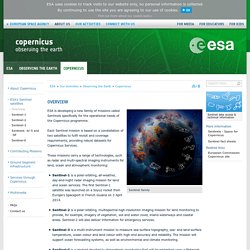 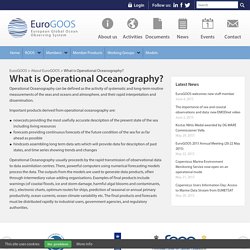 Important products derived from operational oceanography are: nowcasts providing the most usefully accurate description of the present state of the sea including living resourcesforecasts providing continuous forecasts of the future condition of the sea for as far ahead as possiblehindcasts assembling long term data sets which will provide data for description of past states, and time series showing trends and changes Operational Oceanography usually proceeds by the rapid transmission of observational data to data assimilation centres. There, powerful computers using numerical forecasting models process the data.

The outputs from the models are used to generate data products, often through intermediary value-adding organisations. EoApp. Barcelona World Race 2014-15 Tracker. About Argo. The broad-scale global array of temperature/salinity profiling floats, known as Argo, has already grown to be a major component of the ocean observing system. 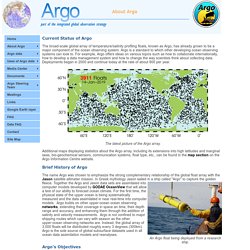 Argo is a standard to which other developing ocean observing systems can look to. For example, Argo offers ideas on various topics such as how to collaborate internationally, how to develop a data management system and how to change the way scientists think about collecting data. Youtube. Laser. Red (660 & 635 nm), green (532 & 520 nm) and blue-violet (445 & 405 nm) lasers Among their many applications, lasers are used in optical disk drives, laser printers, and barcode scanners; fiber-optic and free-space optical communication; laser surgery and skin treatments; cutting and welding materials; military and law enforcement devices for marking targets and measuring range and speed; and laser lighting displays in entertainment. 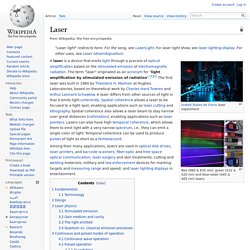 Fundamentals Lasers are characterized according to their wavelength in a vacuum. Most "single wavelength" lasers actually produce radiation in several modes having slightly differing frequencies (wavelengths), often not in a single polarization. Although temporal coherence implies monochromaticity, there are lasers that emit a broad spectrum of light or emit different wavelengths of light simultaneously. Terminology Laser beams in fog, reflected on a car windshield Design Components of a typical laser: 1. Laser physics. Atmospheric Remote Sensing: Instruments: Oceanographic Lidar. R. 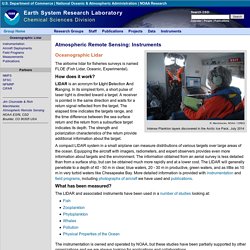 It is able: to read all altimetry data from official data centres, from ERS-1 and 2, Topex/Poseidon, Geosat Follow-on, Jason-1, Envisat, Jason-2 and Cryosat, from Sensor Geophysical Data Record to gridded merged data to do some processing and computations to visualise the results It is available for Windows XP, Mac OS X 10.4 and 10.5 (ppc/intel), Linux Redhat EL4. The Basic Radar Altimetry Toolbox is a joint project between ESA and CNES. March 2012 : update of BRAT v3 some improvements have been added to BRAT: - Addition of an "aliases" capability, that enables users to use the same names for the most frequent data fields.

Radar Altimetry Tutorial - Scatterometer wind measurements in meteorology at KNMI. Products and software Scatterometer work. Scatterometry - Overview. What is Scatterometry? Scatterometers are unique among satellite remote sensors in their ability to determine the wind direction over water. Scatterometers can provide a wealth of wind velocity observations over the earth's bodies of water. These wind observations have a wide variety of applications including weather forecasting, marine safety, commercial fishing, El Nino prediction and monitoring, and long term climate studies. Radar Remote Sensing. RADAR stands for "RAdio Detection And Ranging". By virtue of sending out pulses of microwave electromagnetic radiation this type of instrument can be classified as an "active sensor" - it measures the time between pulses and their reflected components to determine distance.

Different pulse intervals, different wavelengths, different geometry and polarizations can be combined to roughness characteristics of the earth surface. Radar wavelengths range between less than 1 millimeter to 1 meter. All photos can be called images but not all images should be called photos - images that are acquired digitally are usually not referred to as photographs ... there is no such thing as a radar photograph! Radar uses relative long wavelengths which allows these systems to "see" through clouds, smoke, and some vegetation. OSI SAF ASCAT-A 12.5-km product. Remote Sensing Systems. Introduction The WindSat Polarimetric Radiometer was developed by the Naval Research Laboratory (NRL) Remote Sensing Division and the Naval Center for Space Technology for the U.S. Navy and the National Polar-orbiting Operational Environmental Satellite System (NPOESS) Integrated Program Office (IPO). It was launched on January 6, 2003 aboard the Department of Defense Coriolis satellite.

Polarization (waves) Circular polarization on rubber thread, converted to linear polarization Polarization (also polarisation) is a property of waves that can oscillate with more than one orientation. Electromagnetic waves such as light exhibit polarization, as do some other types of wave, such as gravitational waves. Sound waves in a gas or liquid do not exhibit polarization, since the oscillation is always in the direction the wave travels. World of Change: Collapse of the Larsen-B Ice Shelf : Feature Articles. In the Southern Hemisphere summer of 2002, scientists monitoring daily satellite images of the Antarctic Peninsula watched in amazement as almost the entire Larsen B Ice Shelf splintered and collapsed in just over one month. They had never witnessed such a large area—3,250 square kilometers, or 1,250 square miles—disintegrate so rapidly. Current Ice Conditions and Forecasts - Weather and Meteorology - Environment Canada. At the Canadian Ice Service (CIS), our mission is to provide the most accurate and timely information about ice in Canada's navigable waters.

To observe salinity over the oceans. RSS / Data Fusion / Sea Surface Temperature. Ocean Optics Web Book. As used in this book, remote sensing refers to the use of optical measurements made from aircraft or satellites to obtain information about the constituents of natural waters, the corresponding IOPs, or the bottom depth and type. Oceanic remote sensing uses electromagnetic signals from the near UV (wavelengths from ) to various radar bands (wavelengths from to.

MODIS Web. MODIS Web. How Night Vision Works: Techniques using Low-light and Infrared imaging. Michael Brunke: Research. SST is an important parameter as it drives some climate processes and is fundamental in the calculation of the turbulent flux of heat in models and for the generation of data sets. At the surface, there is a cool skin, a layer a few millimeters thick that is due to the exchange of heat and moisture to the atmosphere as well as the emission of infrared radiation, the radiation just beyond red on the electromagnetic spectrum. Below that in the daytime is a warm layer a few centimeters thick that is caused by the absorption of sunlight (Fairall et al. 1996). OceanColor Home Page. Sea Surface Temperature (SST) - Office of Satellite and Product Operations. SST definitions - GHRSST - The International web portal to the Group for High-Resolution Sea Surface Temperature. Global MODIS SST Viewer. SOSE Coastal Upwelling: Upwelling and Remote Sensing: Other Considerations - Eddies.