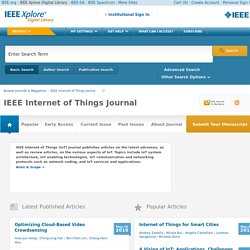 Topics include IoT system architecture, IoT enabling technologies, IoT communication and networking protocols such as network coding, and IoT services and applications. Welcome! - OpenWSN - Confluence. Why Lean Canvas vs Business Model Canvas? Lean Canvas Process and Examples. How To: Create a Lean Canvas. Put yourself in your customer’s shoes and describe up to 3 problems they face today. 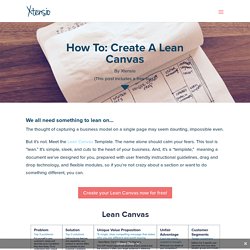 Try to understand their unique needs and challenges. If your consumers have no problems, no frustrations, no longings– this is a problem. It means you have nothing to offer them, and therefore don’t have a business. Problems lead to working business models. Careful! Ten ways the Internet of Things is transforming our lives. Whatever happened to those intelligent fridges we were promised? 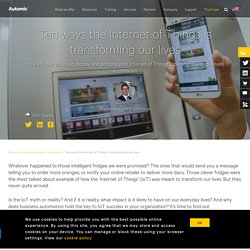 The ones that would send you a message telling you to order more oranges, or notify your online retailer to deliver more dairy. Those clever fridges were the most talked about example of how the ‘Internet of Things’ (IoT) was meant to transform our lives. But they never quite arrived. Is the IoT myth or reality? And if it is reality, what impact is it likely to have on our everyday lives? The Internet of Things Is Far Bigger Than Anyone Realizes. When people talk about “the next big thing,” they’re never thinking big enough. 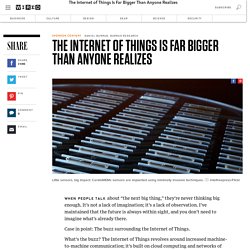 It’s not a lack of imagination; it’s a lack of observation. I’ve maintained that the future is always within sight, and you don’t need to imagine what’s already there. Case in point: The buzz surrounding the Internet of Things. What’s the buzz? The Internet of Things revolves around increased machine-to-machine communication; it’s built on cloud computing and networks of data-gathering sensors; it’s mobile, virtual, and instantaneous connection; and they say it’s going to make everything in our lives from streetlights to seaports “smart.” 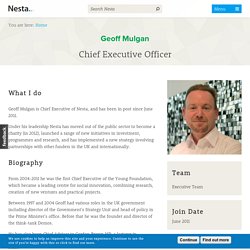 Under his leadership Nesta has moved out of the public sector to become a charity (in 2012), launched a range of new initiatives in investment, programmes and research, and has implemented a new strategy involving partnerships with other funders in the UK and internationally. Biography From 2004-2011 he was the first Chief Executive of the Young Foundation, which became a leading centre for social innovation, combining research, creation of new ventures and practical projects. Phil Smith. Ben Hammersley - Writer, Technologist, Speaker. Rt Hon David Willetts. BoT biographies 11-12. Members of the Board of Trustees for 2011/2012 President Dr Mike Short CBE FREng BA Mike’s career spans 38 years in Electronics and Telecommunications, with the last 25 years in Mobile Communications. 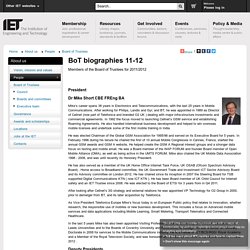 Your examples of what counts as ‘Internet of Things' (with images, tweets) · KCL_DL. What is the Internet of Things? And why should you care? Internet of things. The internet of things (IoT) is the network of physical objects—devices, vehicles, buildings and other items—embedded with electronics, software, sensors, and network connectivity that enables these objects to collect and exchange data. [1] In 2013 the Global Standards Initiative on Internet of Things (IoT-GSI) defined the IoT as “the infrastructure of the information society.” [2]The IoT allows objects to be sensed and controlled remotely across existing network infrastructure,[3] creating opportunities for more direct integration of the physical world into computer-based systems, and resulting in improved efficiency, accuracy and economic benefit;[4][5][6][7][8][9] when IoT is augmented with sensors and actuators, the technology becomes an instance of the more general class of cyber-physical systems, which also encompasses technologies such as smart grids, smart homes, intelligent transportation and smart cities. 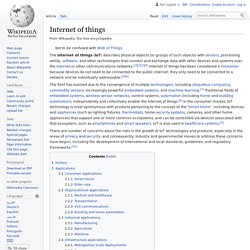 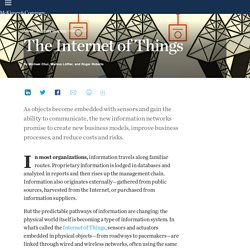 In most organizations, information travels along familiar routes. Proprietary information is lodged in databases and analyzed in reports and then rises up the management chain. Information also originates externally—gathered from public sources, harvested from the Internet, or purchased from information suppliers. 14 1230 internet of things review. Technology Driving Innovation - The Internet of Things: The Next Mega-Trend. Our Thinking Technology Driving Innovation The Internet of Things, or IoT, is emerging as the next technology mega-trend, with repercussions across the business spectrum. 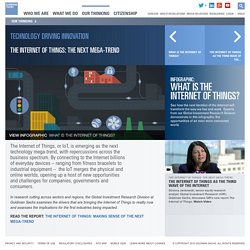 By connecting to the Internet billions of everyday devices – ranging from fitness bracelets to industrial equipment – the IoT merges the physical and online worlds, opening up a host of new opportunities and challenges for companies, governments and consumers. Text Size In research cutting across sectors and regions, the Global Investment Research Division at Goldman Sachs examines the drivers that are bringing the Internet of Things to reality now and assesses the implications for the first industries being impacted. Smart Cities - The Untold Story: Mischa Dohler at TEDxLondon City 2.0. IOT360 Summit: Interview with Mischa Dohler and Usman Haque. Could the Internet of Things = Internet of You? Digital Futures. Monitoring solutions. Prof Mischa Dohler. 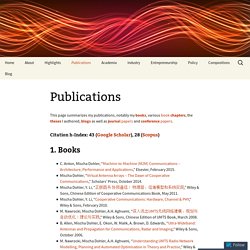