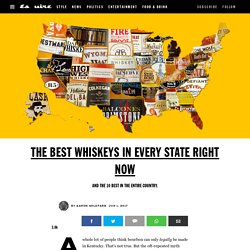 That's not true. But the oft-repeated myth shows how indelible the relationship between Kentucky and bourbon is, a relationship that dates back to Alexander Hamilton and a despised whiskey tax that drove distillers from the mid-Atlantic region to the friendlier Southern state. The absolute best whiskey in America still comes out of Kentucky, whether you believe it is Pappy Van Winkle, George T.

Stagg, or perhaps a more offbeat selection. Likewise, Jack Daniels is, if not the best, the most famous whiskey in America, and the best-selling too. 6 Best World Whiskeys Under $50. Irish Whiskey Guide: 2017. Login I forgot my password Don't Have an Account? 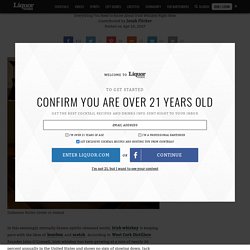 Signup Sent! Please check your email for a link to reset your password. Personalize your experience Date of Birth Thanks! Congratulations! 5 Rules for Drinking Japanese Whisky. Login I forgot my password Don't Have an Account? 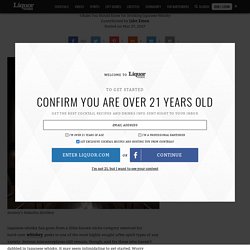 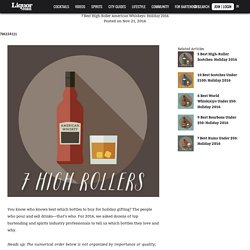 Signup Sent! Please check your email for a link to reset your password. Personalize your experience Date of Birth. The 8 Things You're Getting Wrong About Whiskey. Whiskey can be pretty confusing. 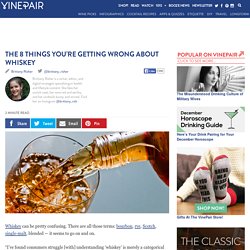 There are all those terms: bourbon, rye, Scotch, single-malt, blended — it seems to go on and on. “I’ve found consumers struggle [with] understanding ‘whiskey’ is merely a categorical term that essentially means distilled grain aged in wood with subgenres of bourbon, Irish, Scotch, and Canadian whiskeys, among others,” says Fred Minnick, author of “Bourbon: The Rise, Fall, and Rebirth of an American Whiskey.” The Difference Between Whisky & Whiskey. 10 Best American Whiskeys Under $50: Holiday 2016.

Around the World in 5 Amazing Whiskeys. Cheap Whiskey: Which are the Best? Bucket list booze is great, but some of us enjoy drinking on a near-daily basis. 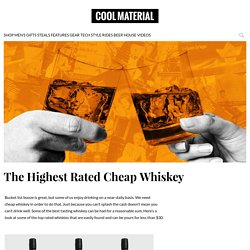 We need cheap whiskey in order to do that. Just because you can’t splash the cash doesn’t mean you can’t drink well. Whiskies. “The range you’ll find in American whiskey is astounding,” says Mikael Mossberg, Distiller Co-Founder and CEO. 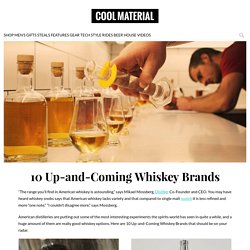 You may have heard whiskey snobs says that American whiskey lacks variety and that compared to single malt scotch it is less refined and more “one note.” “I couldn’t disagree more,” says Mossberg. American distilleries are putting out some of the most interesting experiments the spirits world has seen in quite a while, and a huge amount of them are really good whiskey options. Here are 10 Up-and-Coming Whiskey Brands that should be on your radar. Located in Columbus, Ohio, Watershed, like many craft distilleries, is shaking off the notion that great bourbon can only be made in Kentucky. American Whiskey 101 - A Beginner's Guide. Anyone who knows me will tell you that my weak spot is whisk(e)y. 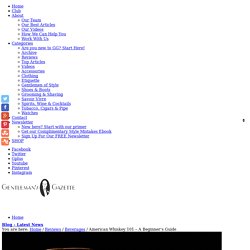 Offer me a dram and we’ll be friends for life. Offer me a bottle and I’ll probably donate a kidney to your great aunt, Gertrude. When it comes to whisk(e)y, most people tend to covet the single malts from Scotland, and many assume that’s what I prefer as well. They’re only half right. As far as whisk(e)y goes, I have two preferred regions. The 8 Irish Whiskies To Help You Get Into The Spirit, Literally. If you thought Scotch whisky was confusing—and it is, delightfully so, a mystery we like to dunk ourselves into once or twice a week, at least—meet Irish whiskey. 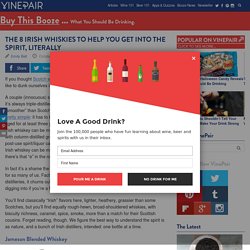 A couple (innocuous) stereotypes distort our collective sense of Irish whiskey: that it’s always triple-distilled (not true), that therefore it’s generally “lighter” and “smoother” than Scotch (also not true). The basics of Irish whiskey are actually pretty simple: it has to be made in Ireland, distilled to less than 94.8% ABV, and aged for at least three years in wooden casks. The Best Whiskeys For Your Money. People will go to extraordinary lengths to obtain expensive whiskeys like Pappy Van Winkle, but for every 23-year-old legend, there's a young whippersnapper whiskey that's a much better value, and won't make you an accessory to a crime. 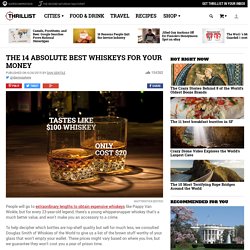 To help decipher which bottles are top-shelf quality but sell for much less, we consulted Douglas Smith of Whiskies of the World to give us a list of the brown stuff worthy of your glass that won't empty your wallet. These prices might vary based on where you live, but we guarantee they won't cost you a year of prison time. Flickr/Opacity Old Forester Classic 86 Proof $23.99 If a whiskey clocks in over 18% rye content, it's considered a high-rye. Collingwood $27.00 Whiskeys from the Great White North aren't usually the first bottles you think to grab, but Collingwood is a traditional light and sweet Canadian whiskey that's "easy to share with anyone.

" Complete Guide to American Single Malt Whiskey. Hen Emerson Lamb was nine, his father sat him down and told him that an invention called the computer was about to change things for the Lamb family. For five generations they’d made their living working for the paper and timber industry in the Pacific Northwest. “He told me, ‘No one’s ever going to buy another piece of paper again'”, Lamb said. He never forgot his father’s warning. Review: Orphan Barrel Lost Prophet 22 Year Old Kentucky Whiskey. When it comes to the super premium American Whiskey space, Diageo is in an interesting position. While Bulleit does amazing business for them, it’s contract distilled at Four Roses and MGP, making it difficult to pull old, rare, barrels from the back of the warehouse and release them as a limited editions.

Diageo’s George Dickel does produce their own whiskey (and excellent whiskey at that), but the market for super premium American Whiskey seems to be much more interested in bourbon or Kentucky Whiskey than Tennessee Whiskey. It would be an exceptionally difficult position to be in were it not for Diageo’s whiskey stocks, which it has acquired along the way through buying and selling other companies. For the most part, Diageo has stored these whiskeys at the old Stitzel-Weller Distillery, which it now uses to showcase their “Bulleit Experience“. The Story Of: American Whiskey. The American whiskey category can be broken down into several subcategories. They are differentiated by the proof at which they are distilled, the types of grain in the mash and the length of time they are aged. Popular American Whiskies include Bourbon Whiskey, Tennessee Whiskey and Blended American Whiskey.

Most North American whiskies are made in column stills and aged in oak barrels, which can be charred or not charred. Julian-Van-Winkle. >Get an inside look at where Pappy Van Winkle is distilled Lots of people are mad at Julian P. Van Winkle III. Van Winkle is the president of the Old Rip Van Winkle Distillery, whose aged bourbons a growing body of aficionados believe to be the finest whiskeys on Earth. The trouble is that demand for his Pappy Van Winkle’s Family Reserve bourbons has lately swollen in exasperating proportion to supply. He releases between 6,000 and 7,000 cases per year, “about what Jim Beam puts out in ten minutes,” Van Winkle says. The scarcity is making bourbon lovers desperate, cranky, and poor. So much bother for a sip of whiskey does not endear Van Winkle to the drinking public, or to shopkeepers, one of whom not long ago bodily attacked Van Winkle’s sales agent for showing up with too meager a delivery.

One does not want to imagine what rashnesses Pappy fans might be moved to if they could see what Julian Van Winkle is doing with his bourbon this morning: He is spitting it out. Irish Whiskey Shows Up In a Big Way at Ultimate Spirits Challenge. The Story Of: Irish Whiskey. In the eighteenth and nineteenth centuries, Irish Whiskey was incredibly popular in Britain, with 1200 distilleries existing in Ireland in 1779. Because many of them were unlicensed, the illicit distilleries forced the government to raise taxes on whiskey production.

By 1822, only 20 distilleries were legal and the number of illegal distilleries had been reduced to 800. 8 Delicious And Cheap Whiskeys To Drink Instead Of Maker's Mark. Best Japanese Whiskies. Last week hummus and yoga were “in”, and while they’re not out yet, there’s a new top dog in Popularville: Japanese Whisky. Notice the spelling — that’s whisky with a -y, like Scotch whisky, not whiskey with an -ey, the spelling used for U.S. and Irish varietals. The spelling harkens to Japanese whisky’s humble beginnings, which revolve around the Narcissus and Goldmund-like stories of two men. The first, Shinjiro Torii, was a pharmaceutical wholesaler who dreamed of making a distinctly Japanese whisky for the Japanese people. The second, Masataka Taketsuru, was an organic chemistry summer student at the University of Glasgow who learned the craft of whisky-making under the roofs of several Scottish distilleries.

After taking a shot earlier in year when The World Whiskies Awards named a Tasmanian single malt the world’s best, Scotland is reeling again with the release of Jim Murray’s latest version of The Whisky Bible. For the first time in the publications 12-year history, a Scottish malt did not take top honors. Here’s the whisky that did, along with other award winners and honorable mentions: 2015 World Whisky of the Year.